The widespread resistance to carbapenem via Enterobacteriaceae is a major public health concern. To investigate the reason for the change of Escherichia coli from carbapenem-susceptible to carbapenem-resistant status after antibiotic therapy, whole-genome sequencing was applied for the analysis of genetic difference between the two isolates. The genome of the two isolates of Escherichia coli with distinct resistant phenotypes recovered from one patient was sequenced and compared. Single-nucleotide polymorphisms and insertions/deletions were analyzed using software MUMmer (http://mummer.sourceforge.net/). The homology of chromosomes, plasmid 1, and plasmid 2 between the two isolates was very high (>99.5%). However, the coverage ratio of plasmid 3 was only 7.13%. This plasmid harbored the IMP-4 carbapenemase-coding gene. The upstream of blaIMP-4 was the plasmid mobilization relaxosome protein Mobe gene and the downstream were class 1 integrom integrase IntI1 and IS6 family transposase IS15DIV, which may be related to carbapenemase gene capture.  Single-nucleotide mutation, insertion, and deletion could not result in the development of resistance to carbapenem, whereas acquisition of the IMP-4-encoding gene may be the reason for changes in resistance to carbapenem.

The abundance of multidrug-resistant Gram-negative bacteria has increased alarmingly in the last two decades worldwide. In particular, the emergence of carbapenem-resistant Enterobacteriaceae (CRE) has become a new challenge in the treatment of infectious diseases [1,2]. In China, the isolation ratio of CRE has increased five-fold from 2005 to 2014 [3]. The mechanism of resistance to carbapenem in Enterobacteriaceae is mainly mediated by the production of carbapenemases, which are capable of hydrolyzing the carbapenems, and production of an extended-spectrum β-lactamase (ESBL) and/or AmpC cephalosporinase (AmpC) in conjunction with membrane impermeability or active drug efflux pumps [4-6]. CRE is difficult to control in the clinical setting because of the multiple acquisition pathways. These include the endogenous pathway through antibiotic selective pressure on intestinal microbiota and exogenous pathway through horizontal transmission or through a combination of these factors [5]. Responding to the threat of antimicrobial resistance (AMR), which includes surveillance and stewardship, has been designated as a strategic priority worldwide. For improved monitoring, detection, and screening of AMR, it is important to determine the AMR genes that are prevalent, genes that are moving around, and those that pose the greatest threat. In recent years, whole-genome sequencing (WGS) has been gradually used for the genotype-based diagnosis of AMR [7-9]. WGS has great potential for epidemiological tracking and understanding the development of resistance via experimental evolution. DNA analysis also offers the opportunity to construct databases that record genes of interest, the mobile elements that move these genes, and the cells or species that acquire such genes [10].

In this study, two isolates of Escherichia coli (E. coli) were collected from one patient prior to and after antimicrobial therapy; one isolate was susceptible to carbapenem, whereas the other was resistant. We performed WGS to identify the genetic heterogeneity within the isolates that result in change of resistance to carbapenem.

One isolate of E. coli E41-2, which was susceptible to carbapenem, was recovered from sputum. After 10 days of antimicrobial therapy, a carbapenem-resistant E. coli E41-1 was also isolated. The isolates were identified by Vitek2-Compact. The minimum inhibitory concentration of the two isolates to antibiotics is listed in Table 1. The crude enzyme extracts of the two isolates were gathered using the repetitive freeze-thawing method. Imipenem hydration activity was determined through the modified Hodge test.

Both isolates of E. coli were susceptible to aminoglycoside. Following antibiotic therapy, one isolate became resistant to imipenem, ertapenem, and cefotetan. The crude enzyme of E41-1 hydrates imipenem, whereas that of E41-2 does not (Figure 1).

Figure 1. The hydration activity of imipenem was determined using the modified Hodge test

Common SNP in the two isolates

There were 134 point mutations between these two isolates of E. coli. However, only 74 points were nonsynonymous mutations (Table 3). Two points of SNP were related to antibiotic resistance; one was the membrane protein E41-1GL001858 and the other was class A ESBL CTX-M-14 (E41-1GL003892). Phenotype comparison showed that these two point mutations did not alter the resistance in the two isolates. The genome chromosome and the three plasmids circos of E41-1 are shown in Figures 2-5. 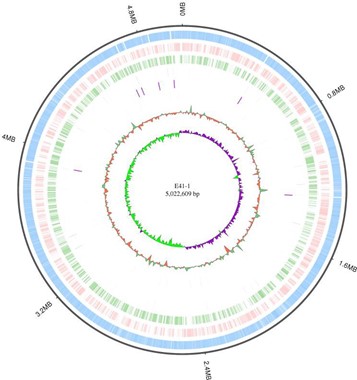 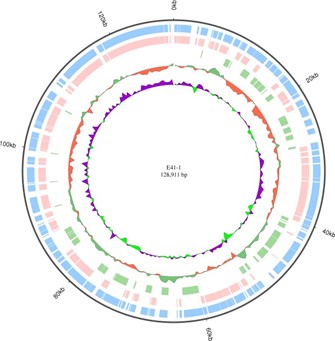 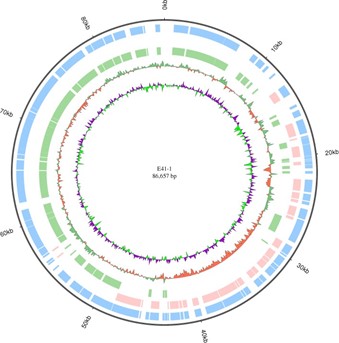 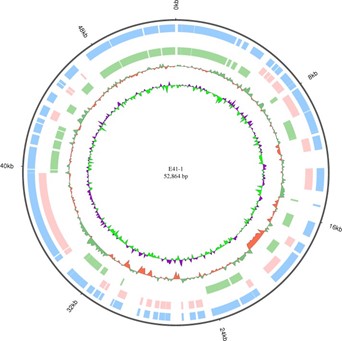 Table 3. Nonsynonymous SNP between the two isolates of E. coli

Insertion/deletion between the two isolates

Compared with E41-2, there were 12 nucleotide changes in E41-1 (nine insertion and three deletion sites). Two deletion sites and one insertion site were on the chromosome, while the other two insertion sites were located on the plasmid (Table 4). In E41-1, there was a large insertion fragment (49,097 bp) in plasmid 3 (GenBank accession no. CP028486.1) compared with E41-2. From the analysis of the coverage ratio of the E41-2 genome compared with E41-1 (Table 5), the homology of chromosome, plasmid 1, and plasmid 2 between the two isolates was very high (>99.5%). However, the coverage ratio of plasmid 3 was only 7.13%. This plasmid harbored the IMP-4 carbapenemase-coding gene and led to a change in resistance to carbapenem (Figure 6). The upstream of blaIMP-4 was the plasmid mobilization relaxosome protein Mobe gene and the downstream were class 1 integrom integrase IntI1 and IS6 family transposase IS15DIV, which may be related to carbapenemase gene capture.

Table 4. Indel analysis between the two isolates of E. coli

The rapid increase in CRE has become a global public health crisis. The resistance type and multiple acquisition pathways of CRE may affect its control in hospitals. CRE are classified into two groups: carbapenemase-producing Enterobacteriaceae (CP-CRE) and non-carbapenemase-producing Enterobacteriaceae (non-CP-CRE). Non-CP-CRE arise through mechanisms other than carbapenemase production. These mechanisms most commonly include production of ESBLs and/or AmpCs, in combination with cell membrane alterations [12]. Importantly, exposure to antibiotics may result in bacterial genomic instability that increases mutation and genetic reassortment [13]. CP-CRE has the ability to produce three different categories of carbapenemases: (a) class A (serine carbapenemases, such as Klebsiella pneumoniae carbapenemase); (b) class B (metallo-blactamases, such as IMP, VIM, and NDM); and (c) class D (OXA carbapenemases, such as OXA-23 and OXA-48) [14]. These carbapenemase-coding genes are mostly acquired through plasmids or transposons.

In our study, carbapenem-susceptible and carbapenem-resistant E. coli isolates were recovered from a single patient during therapy. Prior to the antibiotic therapy, the E. coli isolated from the sputum was susceptible to carbapenem. Following the use of carbapenem to control the infection, the E. coli became resistant to carbapenem. Based on the comparison of the genomes of the two isolates by whole-genome sequencing analysis, the sequences of chromosome, plasmid 1, and plasmid 2 of E41-1 were highly homologous to those of E41-2, and the gene difference was located in plasmid 3. Thus, we concluded that single-nucleotide mutation, insertion, and deletion did not result in the development of resistance to carbapenem. In contrast, acquisition of the IMP-4-encoding gene may be responsible for changes in drug resistance. IMP-4 carbapenemase was first identified in Acinetobacter spp. in Hong Kong between 1994 and 1998 and its encoding gene was not associated with any plasmids [15]. In 2001, the occurrence of the blaIMP-4 gene on a conjugative plasmid in Citrobacter youngae was reported by Hawkey et al. [16]. Based on the results of our study, the blaIMP-4 gene was related to class 1 integron IntI1, IS6 family transpose, and plasmid mobilization relaxosome protein Mobe gene, which may have led to gene capture.

In recent years, WGS has been widely used in genomic research. It provides information on the arrangement of multiple AMR genes and associated genes. Because gene expression is influenced by numerous factors, detection of an AMR gene does not necessarily indicate that the isolate is resistant to some antibiotic. However, WGS is more sensitive and comprehensive than traditional methods and facilitates the identification of more determinants [17]. A total of 49 types of AMR genes were determined in the chromosome of E41-1. Of those, 30 AMR genes exhibited highly homologous identities to those of previously confirmed AMR genes (>99%). Most of the genes (acra, acrb, tolc, smec, mexb, emre, et cl) were efflux pump genes associated with multi-antibiotics, including aminoglycoside, tigecycline, fluoroquinolone, beta-lactam, tetracycline, and fosfomycin. In contrast, E41-1 was susceptible to aminoglycoside. Hence, even if the isolate harbors the emre gene, it may not be resistant to aminoglycoside. The phenotype of the isolate is not determined by a single AMR gene, but is affected by numerous factors. Unlike traditional biocuration, the AMR genes are constantly moving and mutating under selective pressures. New AMR mutations and horizontal transfer of AMR genes among pathogens will occur with the emergence of new threats from the environment and protoresistome [10,18,19]. We should develop proper analytical pipelines for the accurate detection of the resistome and subsequent accurate prediction of the antibiogram based on genomic and metagenomic data [20]. Thus, WGS can be employed inmodifying antibiotic usage strategies to optimize antimicrobial stewardship.

In principle, for the clinical prediction of antibiotic resistance by WGS, a comprehensive set of genetic determinants of the resistome needs to be identified for each species and further research should investigate new mechanisms of antimicrobial resistance. Recent studies demonstrated that WGS could be feasibly and effectively used for surveillance of antibiotic resistance and provides actionable results in infection control.

Significance and Impact of Study

Whole-genome sequencing was applied to analyze the genetic difference between the two isolates of Escherichia coli. We found that single-nucleotide mutation did not contribute to change in antibiotic resistance. Acquisition of a plasmid carrying a migratable gene cassette resulted in spreading of antibiotic resistance.

This study was supported by the National Natural Science Foundation of China (81101282).

©2021 Wu Q. This is an open-access article distributed under the terms of the Creative Commons Attribution License, which permits unrestricted use, distribution, and reproduction in any medium, provided the original author and source are credited.

Figure 1. The hydration activity of imipenem was determined using the modified Hodge test

Table 3. Nonsynonymous SNP between the two isolates of E. coli

Table 4. Indel analysis between the two isolates of E. coli