Background: Hepatocellular carcinoma is a malignancy with a poor prognosis, showing a high relapse and mortality rates despite diverse treatment modalities. In this study, we evaluated whether hepatocellular carcinoma, cirrhotic and normal hepatic tissue express the gastrin releasing peptide receptor and whether there is a significant difference in its distribution among neoplastic and non-neoplastic tissue.

Methods: Sections of paraffin-embedded hepatocelluar carcinomas and cirrhotic surrounding tissues from 61 patients with primary hepatocellular carcinoma were studied, as well as 22 samples from non-cirrhotic and non-neoplastic hepatic tissue. The relationship of gastrin releasing peptide receptor expression with clinicopathologic parameters and clinical outcome was evaluated.

Results: Gastrin releasing peptide receptor immunoexpression was demonstrated in the parenchymal tumor cells in 77% of tumor tissue samples (47/61) and was moderately to strongly expressed in 57.4% of these cases. In the surrounding cirrhotic liver, It immunostaining was also observed, showing a high expression in 15/31 of cases (48.4%). In the normal hepatic tissue, it was also expressed, mostly with a weak to moderate expression (36.4 and 59.1, respectively). Gastrin releasing peptide receptor expression was significantly associated with tumor stage (P=0.047), but no correlation was observed with other clinicopathologic parameters.

Conclusion: Given the aberrant gastrin releasing peptide receptor expression found in a different set of samples, including normal liver tissue, it may not to be a so interesting target for potential clinical applications of gastrin releasing peptide receptor antagonists in hepatocellular carcinoma, but more studies with larger samples should be conducted.

Bombesin/gastrin-releasing peptides (BN/GRP) were demonstrated to bind selectively to cell surface receptors, acting as autocrine mitogenic stimuli for the growth of various types of malignancies in culture [1]. BN/GRP receptors are expressed on a wide variety of tumors, including small lung carcinoma, gliomas, pancreatic, prostatic, breast and ovarian cancers [2,3].

Notably, BN/GRP receptor antagonists, such as RC-3095, were shown to produce long-lasting tumor regressions in various in vivo murine and human tumor models carcinomas [4-6]. Following the binding of RC-3095 to BN/GRP receptors, a down-regulation of EGF and VEGF receptors was observed [7].

In our laboratory, we have looked at biopsy specimens obtained from patients with cervical cancer, and a high expression of BN/GRP receptors was observed [8]. In addition, using an in vivo rat glioma model, we were able to demonstrate significant tumor responses with the combined use of temozolamide and RC-3095 [9]. More recently, a high GRPR content was also observed in human glioma samples by our group [10].

Considering its novel mechanism of action, as well as the lack of dose-limiting toxicities of RC- 3095 in animal studies, we have decided to perform a Phase I trial of this agent in patients with advanced and refractory malignancies. An analytical method for the measurement of RC- 3095 in human plasma was also developed by our group [11]. Interestingly, our data confirmed the safety of RC- 3095 in a series of 25 cancer patients, and evidence of antitumor effects was also shown [12].

The present study is part of our effort to identify tumor types that could be suitable for this experimental therapeutic intervention in early Phase II clinical trials. For that purpose, our approach consisted in the evaluation of sizeable series of paraffin biopsy samples obtained from cancer patients with different types of cancers who were treated at our institution. Tumor types exhibiting a high GRPR expression ratio between tumor/normal tissue are potential candidates to be considered for clinical trials with the GRPR antagonists RC-3095.

HCC is the fifth most common cancer worldwide and the most common form of liver cancer, being responsible for 80% of primary malignant tumors in adults, and frequently occurs in the setting of chronic liver disease and cirrhosis [13]. HCC is highly resistant to the available chemotherapeutic agents, administered either alone or in combination [14], and the median survival following diagnosis ranges from approximately 6 to 20 months [15-17].

The available literature on the expression of BN/GRP receptors in HCC is scanty. Some experimental studies indicate that bombesin is present in rat hepatocellular tumors [18,19]. In one study, the occurrence of BN/GRP receptors in human hepatic cancers transplanted in nude mice was reported, and cytotoxic peptide analogs targeted to these receptors inhibit growth of this tumor [20]. In the present study, we describe the BN/GRP receptor expression in a series of paraffin blocs obtained from patients with HCC treated at our institution. We have also investigated whether the expression of GRPR could be a predictor of clinical outcome.

A retrospective search in our archives between 2004 and 2009 showed that 87 patients were found to have the diagnosis of HCC, leading to 79 tissue samples identified from the pathology records of the Department of Pathology of our Institution. After pathological review, 61 samples of representative paraffin wax block were processed by immunohistochemical technique and included in the study.

During the pathological review of the cancer tissues, an additional 30 samples of cirrhotic surrounding tissue and 22 samples of non-neoplastic and non-cirrhotic tissue from patients without cancer were selected as controls. Samples of normal tissue were hard to obtain from the same patients considering that a high proportion of cases were provided by incisional biopsy, not being associated with a large amount of tissue available for the study.

Clinical data were available in all 61 HCC cases and patients were followed up after histological diagnosis for a median follow-up time of survival cases of 7 months (range: 1–108 months; SD ± 21.9).

Specimens with focal uptake amidst negative cancer tissue scored 1+. For the purposes of data presentation, GRPR expression was classified as “low” if the sum score of intensity was ≤ +1 and as “high” if score was between +2 and +3 (moderate to strong staining).

Data were evaluated using SPSS 14.0. Significant differences between GRPR expression among lesions and surrounding tissues were evaluated using KruskalWallis analysis of variance followed by Mann-Whitney tests. Correlation between GRPR expression and clinicopathologic variables was evaluated using a χ2 test. Kaplan-Meier survival curves were calculated using tumor recurrence (defined as the first appearance of a tumor at any site following definitive treatment) or death as the end points. The difference of overall survival curve or disease-free survival curve was examined by log-rank test. Adequacy of sample size was determined by power analysis. Data are expressed as means ± SE, unless otherwise specified, with P <0.05 considered significant.

GRPR immunoexpression was demonstrated in the parenchymal tumor cells in 77% of tumor tissue samples (47/61) m and was moderately to strongly expressed in 57.4% of these cases (Figure 1). In adjacent non-cancerous hepatocellular tissue, GRPR immunostaining was also observed, showing a high expression in 15/31 of cases (48.4%).

In the non-cirrhotic and non-malignant tissues, GRPR was also expressed, mostly with a weak to moderate expression (36.4% and 59.1%, respectively). It was not observed a significant difference in GRPR expression among the malignant processes and the adjacent tissues by Kruskal-Wallis analysis of variance. The Mann-Whitney test was also not able to demonstrate a statistical significant difference in the GRPR expression among neoplastic and cirrhotic or adjacent normal tissue (p=0.867). Figure 2 shows the overall GRPR expression in malignant and normal tissues. Though the overall analysis of variance did not show any difference between tissues, individual comparisons showed a significantly higher expression of score 3+ (strong expression) in malignant tissue as well as absence of expression, p<0.05 (Table 2). 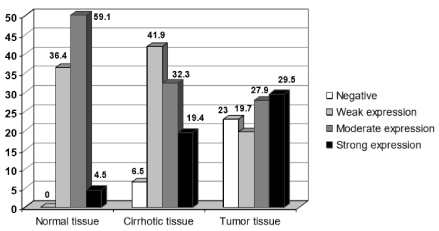 During the follow-up observation period, locoregional recurrence or distant metastases occurred in 5 of the 20 patients (25%) that underwent procedures with curative intent (hepatectomy or transplant) and death was confirmed in 65% of patients with valid information (33/51). 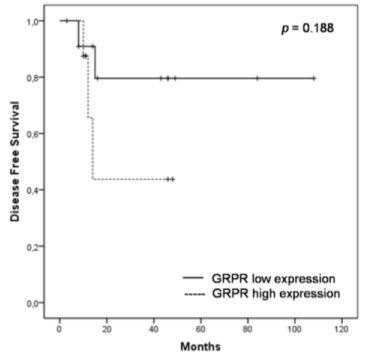 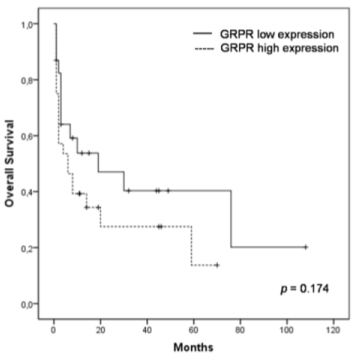 We were able to demonstrate the presence of abundant expression of GRPRs in human hepatocellular carcinoma, while cirrhotic and normal tissues had a less pronounced receptor density, though it was also expressed. Bombesin expression in HCC was defined in primary rat liver cancers by immunohistochemical methods and was found in neurosecretory granules in 13% of the nodules and 29% of the hepatocellular carcinomas. Normal, peritumorous liver tissue, including the frequent atypical foci present in the latter two categories, was negative for this marker [18,19].

The above mentioned authors suggested that des-differentiation of altered hepatocytes in a neuroendocrine direction could be a late event in liver carcinogenesis, thereby contributing to tumor formation. Our study provides a different perspective, since GRPR was also expressed in surrounding cirrhotic tissues and normal liver, though less pronounced than in neoplastic lesions.

In a previous study the treatment of peptide analogs targeted to receptors for luteinizing hormone-releasing hormone, somatostatin or BLP and their combinations strongly inhibit growth HCC in nude mice [20].

The GRP receptors in the primary carcinomas are often heterogeneously distributed. BLP play many physiological roles including the regulation of smooth muscle contraction, the release of hormones and the secretion of enzymes [5], occuring in peripheral blood cells from healthy subjects [21] and in several organs, such as breast lobules and ducts [22], the gastric antrum [23] and the pancreas [24].

In our study, we describe a ubiquitous GRPR expression in non-neoplastic liver tissue, ranging from moderate to high density values. The reason for such a heterogeneity in normal tissue is not clear and needs further investigations. Considering that the sample size containing non-neoplastic tissue was often small, the percentage of receptor heterogeneity may not be representative for the whole liver parenchyma. The observed heterogeneity could be related to a heterogeneous inervation pattern, assuming that GRP plays a neurotransmitter role in the liver, as it does in the other gastrointestinal organs previously evaluated.

Furthermore, it appears to be a correlation of GRPR high expression and relapse after hepatectomy, since 57.1% of patients who relapsed were GRPR-positive, in comparison to 42.9% of those who had no evidence of disease in the follow-up. Even though it did not reach statistical significance, it could be inferred that GRPR expression might be related to the aggressiveness of the disease. Such finding has also been observed in studies with GRPR expression in prostate cancer [25], in which positive immunoexpression of GRP was clearly associated with relapse (p=0.029) and advanced tumor stages (p=0.049).

Several lines of experimental evidence have suggested that the GRP and other BLP are involved with tumor progression, enhancing angiogenesis, local invasion and distant metastases [3]. However, some series have shown that, at least in vitro, GRP/GRPR may actually improve patient outcome. It could be associated with a capacity of enhancing tumor cell attachment to the extracellular matrix [26,27], attenuating metastasis and promoting natural killer (NK) cell binding and cytolysis [28].

Considering the different possible functions suggested for GRP, many studies have assessed the role of GRPR as a prognostic factor for different types of cancer. Studies on lung and colorectal cancer showed that aberrant expression of this peptide receptor was not associated with worse clinical outcome, since patients expressing GRPR had better survival rates when compared with patients with no GRPR expression [29,30].

As in other studies performed in samples obtained from patients with breast and prostate cancer [25,31], our results in HCC suggested that GRPR expression had a negative impact in overall patient survival. The expression of GRPR could correlate with patient survival or tumor recurrence even when GRP expression does not [32]. That could be due to other ligands in the bombesin family that activates the GRPR and also to the susceptibility of being constitutively active, at least when ectopically expressed in a non-malignant human cell line [33].

The observation that GRPR could act as an autocrine growth factor for several tumors have encouraged the synthesis of GRPR antagonists for the experimental treatment of different malignancies. The synthetic antagonists bind with high affinity to the receptors, blocking the signaling pathways, and have exhibited antitumor activity both in vitro and in vivo [34].

The high GRPR expression in a large spectrum of human cancers, as well as the demonstration of its role as a tumor growth factor in various tumor models gives support to the clinical evaluation of GRPR antagonists as experimental anticancer agents [3]. In various tumor types, such as prostate and cervical cancer and, more recently, gliomas, a sizeable difference between GRPR expression between neoplastic and non-neoplastic tissues could be demonstrated [8,10,35,36].

© 2018 Lazaretti NS. This is an open-access article distributed under the terms of the Creative Commons Attribution License, which permits unrestricted use, distribution, and reproduction in any medium, provided the original author and source are credited.