Introduction: To evaluate the association of hypoplastic nasal bone and fetal chromosomal abnormalities in a prescreened sample of Chinese pregnant women.

Materials and methods: This retrospective study followed women whose fetuses shown hypoplastic nasal bone. Fetal karyotyping was performed and pregnancy outcomes were followed. The relationship between hypoplastic nasal bone with abnormal karyotype was evaluated stratified by whether other ultrasound soft markers or structural abnormalities were also observed.

Results: A total of 56707 singleton pregnancies were initially included. After exclusion of unqualified cases, a total of 65 (65/56707, 1.15%) fetuses with hypoplastic nasal bone were included in the analyses, among which 8 (8/65, 12.31%) were determined to have chromosomal abnormalities. Hypoplasia of nasal bone in association with other structural abnormalities had a higher rate of abnormal karyotypes [66.67% (6/9) vs. 9.09% (2/22), Fisher’s exact test χ2=8.256，p=0.004] compared with cases associated with other ultrasound soft markers.

Ultrasound screening for fetal chromosomal abnormalities is an important component of prenatal diagnosis. Abnormal facial features, such as collapse of the nose bridge, ususally indicate fetal chromosomal abnormalities. There are a number of studies suggesting that fetal nasal bone hypoplasis is an indicator of Down syndrome with relatively high sensitivity and specificity [1-4]. It is reported that the positive likelihood ratio of abnormal fetal nasal bone in screening for Down sydrome was about 11.6-50.5 [2,5-7]. However, most of the above studies were conducted in high risk populations. Few studies have been conducted in samples representative of the general population. In most parts of China, screening for fetal structural abnormalities during second trimester of pregnancy has become routine. Therefore, it is possible to include fetal nasal bone observation and measurement as a routine examination.
In this study, we aimed to evaluate the association between fetal nasal bone hypoplasia and fetal chromosomal abnormalities in a sample of Chinese pregnant women.

The current study was conducted at the Obstetrics and Gynecology Hospital of Fudan University in Shanghai, China. Our study protocol was approved by the institutional review board of the Hospital, and oral informed consent was obtained from all participants. We included all pregnant women who received prenatal screening and also gave birth or induced labor at our hospital. During January 2012 to December 2015, there were a total of 58001 births at our hospital, including 1015 twins and other multiple births. In another 279 cases, pregnancies were terminated mid-to-late gestation without receiving prior invasive diagnostic procedures. Thus, we included a total of 56707 singleton pregnancies in the analyses. 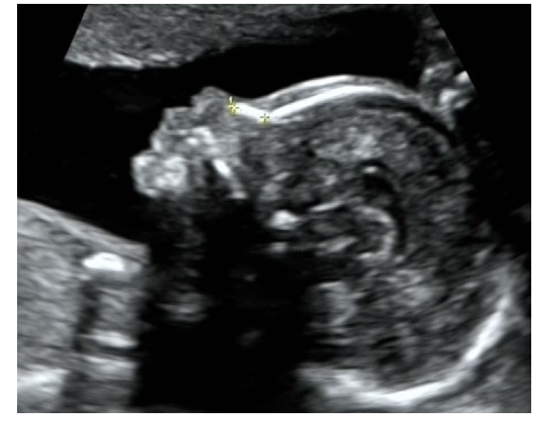 Median with range was summarized for continuous variables, and frequency or rate was calculated for categorical variables. Differences between groups were compared by Chi-square test or Fisher’s exact test when appropriate. All analyses were performed by SPSS 16.0 for Windows (SPSS Inc., Chicago, IL, USA). All significance tests were two sided; p value of less than 0.05 was considered as statistically significant.

Of the 56707 fetus examined, 73 presented abnormal nasal bone development at second trimester ultrasound assessment. Of those 73 cases, three had termination of pregnancy because of multiple structural abnormalities and did not receive genetic amniocentesis, three were confirmed as measurement errors by senior sonologists on further assessment, one underwent termination of pregnancy and did not test for karyotype, and one were one of the twins. Thus, a total of 65 cases with hypoplastic nasal bone were included for final analyses. The prevalence rate of hypoplastic nasal bone was 1.15% (65/56 707) in our study population.

Table 1. Summary of the cases identified with chromosomal abnormalities by genetic amniocentesis (n=24)

Abnormal fetal nasal bone development may be associated with multiple chromosomal abnormalities [16-18]. The most common fetal chromosomal abnormality detected in the current study was Down syndrome (62.5%, 5/8), other chromosomal abnormalities were Trisomy-18 (3 cases), 47, XXY (1 case), and micro-deletion (1 case). Human whole genome SNP genotyping has been routinely applied for amniocentesis in our hospital just about two years ago, and it is possible that there was an under-estimation of chromosomal micro-deletions or micro-duplications. Currently our hospital has recommended gene sequencing of newborns with collapsed nose bridge, and long time follow-up of the growth and development conditions of these children is also very important.

This retrospective study did not measure nasal bone length of all fetuses, therefore, we cannot rule out the possibility of false negative cases to bias our results. In addition, karyotyping could not be performed on 8 fetuses with abnormal fetal nasal bone due to various reasons, which may also affect our study results.

The authors have declared that they have no conflicts of interests in connection with this article.

©2017 Du Y. This is an open-access article distributed under the terms of the Creative Commons Attribution License, which permits unrestricted use, distribution, and reproduction in any medium, provided the original author and source are credited.

Table 1. Summary of the cases identified with chromosomal abnormalities by genetic amniocentesis (n=24)