A 79-year-old female patient, Caucasian, had an exophytic cutaneous lesion in the posterior aspect of the right arm, with a 3-month evolution. On examination, the tumor is vinous, elevated, spherical, solid, bleeding, 3 cm in diameter (Figure 1). The lesion was excised, whose histopathological examination confirmed the diagnosis of carcinoma of the eccrine gland. Thus, she underwent expansion of safety margins surgery (Figure 2), with a favorable evolution, with no residual neoplasm and no recurrences. 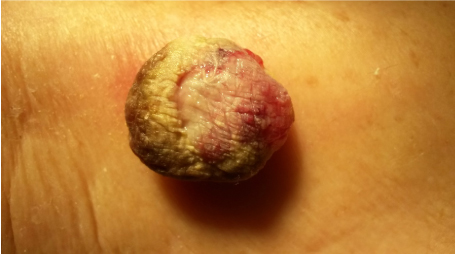 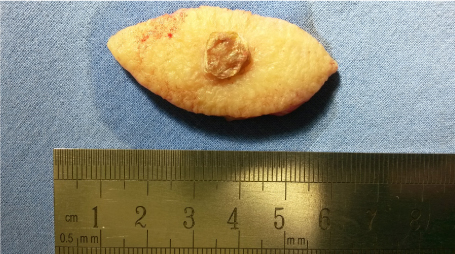 Figure 2. Diagnosis of carcinoma of the eccrine gland.

Carcinoma of eccrine sweat cells is rare, accounting for 0.01% of cutaneous neoplasms. Adnexal skin tumors are believed to be more aggressive compared to other skin tumors and are more prone to recurrence. Studies on its incidence and prevalence are rare and its consideration as a differential diagnosis is important. The occurrence of these neoplasms occurs mainly after the 40 years, being noticed a predilection for the female sex. They are very similar to the more frequent skin carcinomas such as the basocellular and squamous cell, making their diagnosis more difficult. The best treatment depends on the early diagnosis, increases the chances of cure and decreases the rate of mutilation or sequelae.

©2019 Zogbi L (2019) This is an open-access article distributed under the terms of the Creative Commons Attribution License, which permits unrestricted use, distribution, and reproduction in any medium, provided the original author and source are credited.

Figure 2. Diagnosis of carcinoma of the eccrine gland.