The paper is organized as follows. In Section 2, we present a time dependent stochastic differential equation for modeling the number of nanoconjugates that penetrate cancerous cells population in the tissue. In section 3, we introduce notion of reliability function and propose a model for this function. In this section, we also give an algorithm to compute an optimum dose level to achieve a desired value for expected time needed to kill all cancerous cells. Two examples are provided in this section to illustrate our proposed methodology. Concluding remarks are provided in Section 4.

Figure 1.Process of elimination of nanoconjugates

Modeling the process of elimination of nanoconjugates using differential equations

It is known that most drugs used in clinical practice will show first order rate elimination processes, see Jambheker and Breen (2012) [6]. For a nanodrug delivery system this means that the number of nanoconjugates will decrease at a rate that is proportional to S(t). Using this fact, from Figure 1, we can describe the elimination of nanoconjugates from the body through the following four ordinary differential equations:

where d*=d1+d2+d3 see Tenenbaum and Pollard (1985) [7]. Also, solving the resulting differential equations give

From the equation (8) it is clear that as t approaches to infinity, the R(t) approaches to C. Also, since R(t) must be a non-decreasing function in t, we need γ1, γ2 and d4 to be less than or equal to d*.

goes to zero as t approaches infinity. Then,

Notion of reliability function and a criteria to find C

Let N(t) be the number of cancerous cells still in the targeted tissue at time t. Define,

In equation (15), T represents the first time that all cancerous cells will be destroyed and a targeted tissue will be cancer free. Now, we define

We refer to P (t) as the reliability function of nanotechnology drug delivery systems for cancer therapy.

It is worth mentioning that the classical definition of reliability function is defined in-terms of the survival distribution function of its lifetime. For more details about the classical notion of reliability see Lawless [15]. Now to calculate P(t) we need to model N(t). Following arguments similar to the ones used in sections (2.1) and (2.2), we use the following stochastic differential equation,

the equation (19) reduces to

Corollary 1.Under the model ,

is a Gaussian process with mean

is given by part(d) of Lemma 1 and

Proof. Use Lemma 1, part(a) and Ito concepts, which says that for any deterministic function g, the process

is Gaussian process with mean zero and

Theorem 1. Under the assumtions of Corollary 1, the probability density function of T, is approximately given by 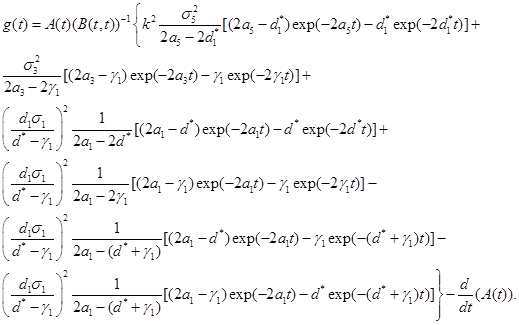 From the equation (23), it is clear that’s E(t) a decreasing function in C.

Unfortunately, Nanotechnology reliability is a new field and data are not publicly available to apply to our proposed model. Thus, in the following example we illustrate our method by assigning numbers to all the parameters in the model.

. Figure 2, gives the reliability function as a function of t. One can also compute

Our proposed criteria to find an optimal C is: Find the lowest C such that the average E (T) takes some desired value, say α. That is we want the lowest dose such that T= α. Now to obtain our optimal C that achieves α mean, we propose the following algorithm. It should to be noted that our algorithm is similar to gradient method. However, here the domain of our function is all positive integers [18,19].

It is worth mentioning that since E(T) is a decreasing function in C, our algorithm gives the global minimum. The following example illustrates application of our Algorithm. Again in this example we assign numbers to some of the parameters in our model.

Remark: One can also use the following criteria to find optimal C: Find the lowest C needed to destroy all cancerous cells within certain time with some level of certainty , say probability ≥0.95. Algorithm similar to one used for the previous criteria can also be used to obtain optimal C.

In this paper, we have introduced a unified definition of reliability function for nanotechnology drug delivery systems in cancer therapy. Our notion provides a general framework for assessing reliability and it is very flexible and easy to use. As one expects, our finding shows that, one can achieve a specific value for E(T) with low dose level by having small k. By increasing k the dose level increases exponentially. Also, by increasing E(T), the dose level decreases.

The work of the first author is partially supported by the National Science Foundation, DMS1208273.

©2016 Ali G Mansoori, This is an open-access article distributed under the terms of the Creative Commons Attribution License, which permits unrestricted use, distribution, and reproduction in any medium, provided the original author and source are credited.

Figure 1.Process of elimination of nanoconjugates