Aim: Hypoxic fetal compromises are cured by the early delivery with C-section at present, while the surgery causes maternal morbidity by uterine scar. The vaginal delivery of normal fetus after treatment in utero will cure the fetus reducing placenta accreta in succeeding delivery.

Results and conclusion: The success of No. 1-3 topics have been reported, while No. 5-7 will be achieved in the future. Preterm labor is particular problem in CP reduction.

Fetal arterial blood oxygen pressure (PaO2) is about half of adult, and umbilical arterial PaO2 was lower than 50 mmHg [1] therefore fetus tends to be hypoxic, due to the oxygen supply from circulating maternal arterial blood in the placenta. Fetal hypoxia damaged central neuronal cells [2]. Placenta villi prepares active transfer function of nutritive materials for fetal growth, e.g. glucose concentration of fetal blood is higher than maternal blood, while oxygen and carbon dioxide gasses are transferred by passive function. Therefore, the active transfer function is damaged forming fetal growth restriction (FGR), preserving simple passive gas transfer, therefore fetal hypoxia appears in FGR after the fetal weight reduction, i.e. FHR acceleration disappears against fetal movement in early stage of hypoxia, where FHR variability is preserved, which is provoked by minor fetal movements. Then suddenly appear severe hypoxic FHR, composed of the loss of variability, severe late decelerations and bradycardia within 2 weeks after the loss of acceleration, where all cases received C-section, but the outcome was ominous, developing severe neonatal asphyxia or death, while FGR cases of normal acceleration was born in normal vaginal delivery [3]. Therefore, fetal brain damage due to hypoxia should be prevented in FGR cases.

O2 gas inhalation for 2 L per min was usually performed in cases of fetal distress, where umbilical arterial PO2 elevated, but ineffective to disappear fetal hypoxia in the past [1].

Utsu & Maeda [4] found high echogenesity and high GLHW tissue characterization value in a FGR case in the second trimester, detecting fibrin deposit (Figure 1) in intervillous space by ultrasound, treated with 5,000 U heparin every day, where fetal weight increased to normal level, no hypoxic sign was found, and normal neonate was obtained, instead of fetal death due to FGR in previous pregnancy. Therefore, a FGR case would be treated with fibrin solution therapy, if fibrin deposit is diagnosed by high ultrasound image echogenesity and GLHW tissue characterization. The fibrin deposit would be treated even in the loss of FHR acceleration, to prevent severe hypoxia in FGR, where the recovery of acceleration should be confirmed. The FHR in the loss of FHR variability is such severe fetal brain damage as the anencephalic FHR, so that C-section should be performed before the loss of variability [5] 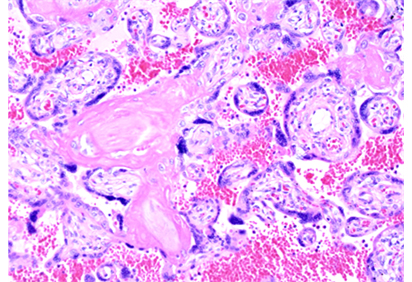 The application of antiglutamate [6], free radical scavenger and others have been proposed.

The ablation of nutritive vessels to acardiac twin (TRAP sequence) was achieved by the non-invasive high-intensity focused ultrasound [7]. Various fetal abnormalities will be noninvasively treated by the technique, where associated hypoxia will be treated.

Treatment of hypoxia due to uterine artery constriction in preeclampsia

The constriction of uterine artery, radial and spiral arteries reduce maternal arterial blood flow in the placenta resulting placental infarction, fetal hypoxia and fetal death (Figure 2) due to the sympathicotony in preelampsia [8]. Therefore, anti-sympaticotonic treatment will prevent the hypoxia in the future.

Figure 2. Placental infarction in a preeclampsis complicated by fetal death.

Congenital diseases develop fetal hypoxia, where stem cell therapy will treat tissue defect and neurological damage, and genetic diseases will be treated by chromosomal engineering and gene editing in the future, where associated hypoxia will be removed.

Since preeclampsia is caused by the excitation of hypothalamic sympathetic center [8] uterine artery and its branch arteries would be constricted inhibiting placental maternal blood flow to cause placental infarction and fetal hypoxia causing fetal death in the past. Therefore, anti-sympathicotonic treatment will treat pregnancy induced hypertension, organ damages and fetal hypoxia in the future.

Cesarean section rate performed by obstetric indication was about 8 % and by fetal hypoxic NRFS was 3% of all births, namely actual C-section number in one million births in Japan will be about 30,000 cases in a year preventing fetal damage due to hypoxia. The effort to reduce C-section under the diagnosis of NRFS (fetal hypoxia) will be useful to lower the maternal morbidity.

In preterm labor, periventricular echodensity (PVE), which is hyperechogenesity around the ventricle, preceded neonatal PVL and CP, when the PVE lasted until preterm birth, but no brain damage was noted in the full term delivery [12]. Therefore, normal infant is expected without hypoxia when preterm labor is suppressed by tocolytic therapy until full term delivery.

Although the treatment of fetal hypoxia usually depends on C-section at present, obstetricians would endeavor to find such non-surgical therapy as the solution of fibrin deposit in placental intervillous space, or antisympathetic therapy in preeclampsia. Various maternal, fetal or genetic diseases will be treated in the future to achieve normal vaginal delivery. Preterm labor will be treated to prevent CP.

©2016 Maeda K. This is an open-access article distributed under the terms of the Creative Commons Attribution License, which permits unrestricted use, distribution, and reproduction in any medium, provided the original author and source are credited.

Figure 2. Placental infarction in a preeclampsis complicated by fetal death.