Initial experience: The use of novel balloon expandable sheaths with the impella 2.5L catheter during high risk percutaneous coronary intervention

Vascular access remains a challenge in many patients who require ventricular support using the Impella catheter (Abiomed, Inc., Danvers, MA) for high risk percutaneous coronary intervention (PCI). Specifically, limitations of vessel size, calcification and tortuosity may make large bore access difficult. Balloon expandable (BE) sheath technology allows for the insertion of a smaller diameter sheath, which then can be inflated to a larger French size. Entry at a smaller profile is hypothesized to result in less vessel trauma and improved trackability. We report the first clinical use of the SoloPath BE sheath (Terumo Medical Corporation, Sommerset, NJ) in conjunction with the Impella 2.5L catheter for high risk PCI.

Consecutive patients were enrolled presenting for high risk PCI for unprotected left main stenosis or in the setting of a left ventricular ejection fraction <30% requiring left ventricular assist device. Indications for a BE sheath were aorto-iliac tortuosity with diffuse calcification or small common iliac diameter of <7 mm.  Ilio-femoral angiography was performed prior to sheath insertion.  A PercloseProGlide (Abbott Vascular, Abbott Park, Illinois) closure device was used for hemostasis in 2 cases using a 2 suture “pre-close” technique and 1 underwent pre-planned surgical closure due to a calcified artery. After PCI, the sheath was deflated to ~15Fr and removed. Data on vascular complications was recorded.

There were 4 patients (mean Age: 71.5, 3 male, 2 with diabetes, 2 with PAD) requiring Impella support during PCI (2 left main stenosis, 1 LVEF <30%) included.  Three patients had aorto-iliac tortuosity and 1 patient had an iliac diameter <7 mm.  The BE sheath was inserted with an initial outer diameter of 15 Fr. and was advanced to the common iliac artery. The sheath was inflated at 20 ATM for 60 seconds for an expanded outer diameter of 19 Fr and expanded internal diameter of 16 Fr.  Following Impella delivery and PCI, the sheath was removed.  No vascular complications occurred during hospitalization.

A BE sheath is an alternative to conventional insertion of large bore sheaths for ventricular support devices. Given a smaller initial profile, gradual expansion has a potential for less vascular injury.  Further studies are needed to determine if fewer vascular complications occur after use of this novel device.

In recent years, there has been an increase in the use of percutaneous left ventricular assist devices (LVAD) in the context of high-risk percutaneous coronary interventions (PCI).  Femoral access remains the route of choice for insertion of these devices; however vessel suitability may be limited by tortuosity and/or the presence of peripheral arterial disease. Specifically, the arterial introduction of large bore devices has been associated with increased rates of dissection, rupture, or occlusion of the ilio-femoral vessels [1].  The use of balloon expandable sheaths has been shown in a handful of case reports to increase access availability, reduce vascular complications, and improve the maneuverability of large devices [2,3].  However, there are no reports detailing the use of balloon expandable sheaths in conjunction with percutaneous LVAD therapy in elective high-risk PCI.

The Solopath balloon expandable sheath (Terumo Medical Corporation, Sommerset, NJ) is composed of a folded outer sheath that is pre-mounted over a central balloon dilation catheter.   The outer sheath has a hydrophilic coating to facilitate delivery through the femoral artery.  Once inserted, the balloon catheter is inflated using a standard inflation device and the folded outer sheath is expanded to achieve its nominal diameter.  The embedded stent in the outer sheath maintains luminal patency [4]. In the present report, we describe the safety and feasibility using the Solopath sheath in conjunction with the Impella 2.5L (Abiomed, Inc., Danvers, MA) catheter in elective high-risk PCI.

Retrospective data was collected from 4 patients undergoing high risk PCI with Impella support and concomitant use of the Solopath sheath. Requirements for left ventricular support in these cases included reduced left ventricular ejection fraction (<30% by echocardiography) or left main stenosis >70%.  Indications for use of a balloon expandable sheath were the presence of aorto-iliac tortuosity with diffuse calcification and/or small common iliac diameter <7 mm.   Patients were followed for 30 days after the procedure and monitored for vascular complications.

After femoral access was obtained, a 5Fr pigtail catheter was advanced into the mid abdominal aorta and a distal aortic/pelvic angiogram was performed.  A stiff Amplaz wire was inserted through the femoral sheath and advanced to the central aorta.  The femoral sheath was removed and 2 Perclose Proglidesutures (Abbott Vascular, Abbott Park, Illinois) were deployed but not tightened as per the “pre-close” technique.  A 15 Fr Solopath sheath was advanced over the wire into the proximal common iliac artery.  A 50% contrast/50% saline mix was used to inflate the Solopath to 20 atm for 60 seconds. This inflation is designed to achieve an expanded outer diameter of 19Fr and expanded internal diameter of 16Fr (Figure 1).  The balloon dilator was then deflated and removed leaving the expanded sheath in place.  Heparin was administered to achieve an activated clotting time of >200 seconds.  A 14Fr Impella breakaway sheath was inserted into the Solopath expanded sheath (Figure 2) and a 5Fr pigtail catheter was advanced through the Impella sheath across the aortic valve and into the left ventricle.  A stiff 0.014 guide wire was passed through the catheter and the catheter was removed over the wire.  An Impella catheter was inserted through the sheath and advanced over the wire into the left ventricle with fluoroscopic guidance (Figure 3).  Contralateral femoral access was obtained for advancement of coronary guides and wire for percutaneous coronary intervention. 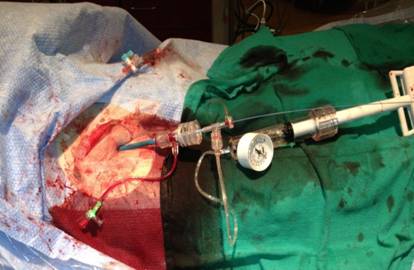 Figure 1. The solopath balloon expandable sheath is inflated to achieve an expanded outer diameter of 19Fr and expanded internal diameter of 16Fr. 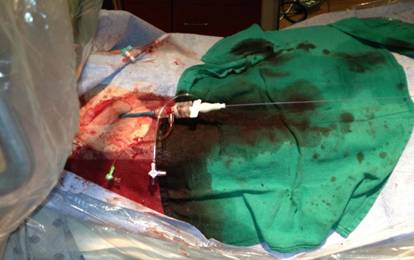 Figure 2. A 14 Fr Impella breakaway sheath is inserted into the Solopath prior to advancing the Impella device. 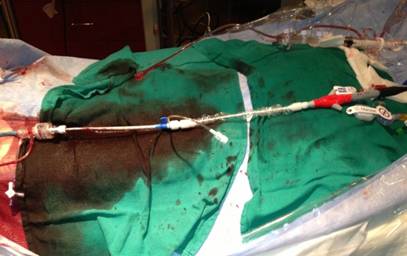 Figure 3. The Impella device is inserted through the breakaway sheath and advanced over an 0.014 wire into the left ventricle with fluoroscopic guidance.

A total of 4 patients (3 male, 1 female, age of 71.5 +/- 9 years) underwent Solopath sheath insertion during PCI due to aorto-iliac tortuosity (n=2) or iliac size <7 mm (n=2) (Figure 4).  No difficulties were encountered during advancement of the sheath or balloon inflation (Figure 5).  Impella support was used due to left main stenosis (n=2) or left ventricular systolic dysfunction with an estimated EF <30% (n=2) and the device was successfully advanced through the Solopath sheath and activated with no mechanical dysfunction and coronary intervention proceeded without difficulty (Table 1).  Perclose closure device was used for hemostasis in 3 of the patients and manual hold achieved hemostasis was 1 patient following sheath removal.  At the conclusion of the intervention and out to 30 days, there were no vascular complications noted.

Table 1. Demographics of the study population 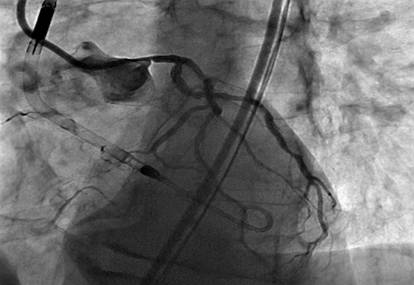 Figure 4. The Impella device is within the left ventricle as percutaneous intervention is about to proceed in the left main artery.

Figure 5. Initial femoral angiogram reveals iliac tortuosity and during inflation of the Solopath balloon expandable sheath, the tortuosity is alleviated.

The Impella has a soft tip with an obtuse angled metal body and when advancing the device through the peripheral artery, the stiffness of the metal body may decrease the maneuverability of the device through tortuous or severely calcified vessels. There are no studies published examining the safety of inserting Impella devices in patients with peripheral vascular disease but known vascular complications reported so far include bleeding, aneurysm, AV fistula, and acute thrombus formation of the superficial femoral artery [5,6]. This case series documents that using a balloon expandable sheath to insert a left ventricular assist device through a vascular artery that has tortuosity or atherosclerosis is safe and feasible. Though the 14 Fr Impella requires a 15 Fr Solopath sheath for insertion, the Solopath has a low profile entry to minimize trauma to the vessel and the hydrophilic coating of the outer sheath allows for easier navigation through tortuous vessels.  Once inflated, the sheath dilates the arteriotomy and increases maneuverability of the device for smooth delivery.

There are 2 published reports using the Solopath sheath for trans-femoral aortic valve replacement (TAVR) for a total of 14 patients.  Fusari et al. described 6 patients where an 18 Fr Nova Flex sheath was initially used (Edwards Lifesciences Inc, Irvine, CA, USA) for the TAVR but could not be advanced through the periphery due to aorto-iliac tortuosity.  The Nova Flex was exchanged for a Solopath sheath, which was advanced into the aorta and inflated to an expanded outer diameter of 24 Fr and inner diameter of 21 Fr with no complications reported [7].

Dimitriadis et al. initially screened the peripheral anatomy of the TAVR patients using CT angiogram and out of 96 patients, 3 had an arterial diameter <7 mm and 5 had peripheral artery disease. The Solopath sheath was selected for usage in that patient population and after the sheath was advanced into the aorta, it was inflated to an expanded outer diameter of 21 Fr and an inner diameter of 19 Fr.  There was only 1 complication reported, which was a femoral artery rupture that occurred after sheath removal and attributed to small vessel diameter [4].  Extensive calcification of the peripheral artery or very small vessel luminal diameter may limit the ability to use the sheath so it is still at operator’s discretion to select appropriate patients for the procedure.

According to the Instructions for Insertion provided by Terumo Medical, potential damage to the sheath may occur if a device is forced through the restricted or unexpanded part of the sheath causing the sheath to potentially break when attempting to remove the device.  If this problem occurs, the balloon catheter should be re-advanced into the expanded sheath and inflated again to achieve full dilation of the expanded sheath [7].  Due to the limitations of the small case series, the ideal patient population for balloon expandable sheath remains to be determined and currently, the use of this sheath with Impella is not FDA approved.

©2015 Nguyen J. This is an open-access article distributed under the terms of the Creative Commons Attribution License, which permits unrestricted use, distribution, and reproduction in any medium, provided the original author and source are credited.

Table 1. Demographics of the study population

Figure 1. The solopath balloon expandable sheath is inflated to achieve an expanded outer diameter of 19Fr and expanded internal diameter of 16Fr.

Figure 2. A 14 Fr Impella breakaway sheath is inserted into the Solopath prior to advancing the Impella device.

Figure 3. The Impella device is inserted through the breakaway sheath and advanced over an 0.014 wire into the left ventricle with fluoroscopic guidance.

Figure 4. The Impella device is within the left ventricle as percutaneous intervention is about to proceed in the left main artery.

Figure 5. Initial femoral angiogram reveals iliac tortuosity and during inflation of the Solopath balloon expandable sheath, the tortuosity is alleviated.