Efficacy and Examination of an Alkaline Buffered Commercial Creatine Supplement- Kre-Alkalyn®, in Athletes

Creatine is used by the human body to perform muscular acts. It has therefore been established as a supplement for bodybuilders and other athletes. In addition, modifications to creatine have been made in commercial laboratories for the purpose of increasing the efficacy of this supplement. Here, we examine the commercially available buffered creatine, Kre-Alkalyn®, in several athletic populations including members of the Bulgarian Olympic weightlifting team. Several factors, including qualitative questionnaires and physiological tests, were performed to determine the efficacy of Kre-Alkalyn® when compared to placebo or traditional creatine monohydrate.

The purpose of this study was to compare the effects of Kre-Alkalyn® and Creatine Monohydrate on training-induced changes in strength and body composition of athletes including Olympic-level weightlifters. It is well established that the human body uses approximately 2g of creatine per day to perform activates of daily living. The average adult can store 120-140g of creatine in their body. Most of the body’s storage of creatine is in the skeletal muscles (95%, mainly within type II fast-twitch muscle fibers) while the brain, heart, liver, kidney, lungs, and spleen all store the remaining 5%. Creatine is taken by many athletes and bodybuilders in order to increase anaerobic performance. Some studies have shown that creatine ingestion affects the performance of muscles during maximal exercises [1], while other reviews remain skeptical-even suggesting egrolytic potential from creatine ingestion [2,3].

Modifications to creatine monohydrate have been designed by several companies to increase the bioavailability of the molecule. In several reports, a sodium bicarbonate buffered creatine, under the trade name Kre-Alkalyn®, has been shown to provide moderate increases in bioavailability [4,5]. The pH buffering systems, such as the one used in Kre-Alkalyn®, are thought to prevent the breakdown of creatine to creatinine before it enters the muscle. Kre-Alkalyn® has shown to serve a protective effect against cisplatin-mediated cellular toxicity [4]. However, debate exists as to whether creatine supplementation is ergogenic or ergolytic[6].

Several studies were conducted to assess the ability of Kre-Alkalyn®, and in some cases traditional creatine monohydrate, to increase fitness level, endurance, and physical well-being in trained athletes. 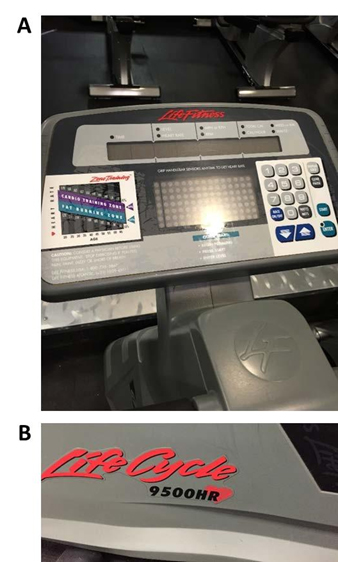 The qualitative findings suggested that energy level, endurance level, and physical well-being were increased in both adult cohorts ingesting Kre-Alkalyn® over a 30 day period. Subjects reported a rate increase in their energy of roughly 1.5 to 2 categories. For example, subject 1 reported a change in energy from a 3 (So-So) to an average rating over the thirty day study period of 1.17. Similar increases are shown for each category tested and for each subject in Table 2. Though qualitative and subject to reporting bias, these findings were suggestive of an underlying effect on metabolism and mood induced by bioavailable creatine.

Stamina and strength increases between placebo and Kre-Alkalyn® groups

Six subjects each were tested for endurance and stamina using the Life Fitness cycling system with either placebo or Kre-Alkalyn. The pre-test showed that both the placebo group and theKre-Alkalyn® group were at about the same endurance and stamina levels, capable of maintaining a level 5 (See Life Fitness user’s manual for details), at 100 rpm’s for 20 minutes. The placebo group made little progress during the 8 week test period, reaching a level 6, at 100 rpm’s for 20 minutes. In contrast, the Kre-Alkalyn® group reached a level 15, at 100 rpm by the end of the 8 week test period and was able to maintain this level for 40 minutes.

A full scale assessment of Kre-Alkalyn’s effects on physical endurance and training was conducted. Bulgarian weightlifters, between 17 and 18 years of age in peak physical shape, were asked to ingest either 7.5 grams of creatine monohydrate or Kre-Alkalyn®. During a 60 day trail, body weight was monitored, even though participating athletes were on strict diets due to their Olympic status of competition. Additionally, both groups appeared to be healthy without any side effects from daily creatine supplementation. Two participants dropped out of the study before completion due to personal injuries.

No significant differences in the creatinine clearance were seen between groups as quantified every 2 weeks during the eight-week testing period, but are suggestive of equivalent increases in creatine consumption between groups (Figure 3). Data is also suggestive that increased mg consumption does not lead to an increase in creatinine excretion (Figure 3). Blood tests remained within normal ranges and did not vary between groups during this period (Figure 4). Other metabolic blood work and examinations of physical health were not different between groups. The creatine monohydrate group showed an average increase over baseline of 8.39% of maximum weight lifted for the snatch, clean & jerk, high snatch, & back squat (not shown). The Kre-Alkalyn® group showed an average increase over baseline of 10.76% (not shown). No significant changes in body weight for either the creatine monohydrate group or the Kre-Alkalyn® group were noted. Blood and urinalysis findings were also unremarkable (see examples in Figure 4) as were tests of testosterone and lactate dehydrogenase (LDH). 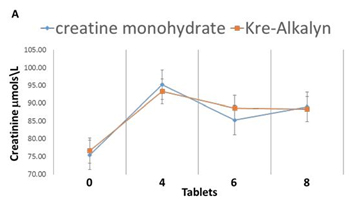 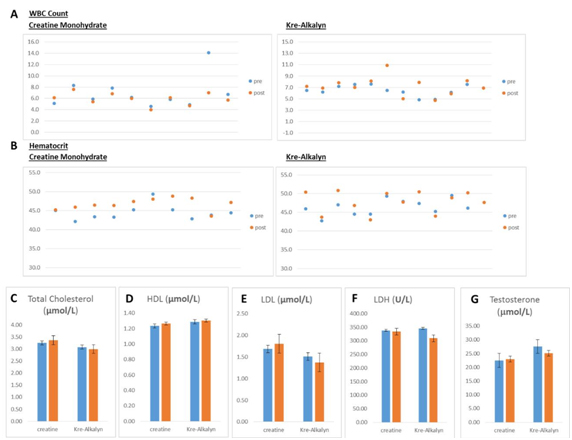 As noted above, qualitative reports indicated that ingestion of Kre-Alkalyn® led to increased feelings of well-being, endurance and energy level. Furthermore, a simple test of stamina and strength was conducted using cyclists who were provide with a daily dose of either placebo or Kre-Alkalyn® indicating an increase in endurance to 40 minutes, double controls, at a significantly higher intensity setting that controls. Kre-Alkalyn® therefore seemed to provide both a subjective and testable increase in strength and endurance when compared to controls over an 8 week test period.

These initial studies were the backdrop for a more significant study conducted using Olympic-quality athletes. Specifically, 24 members of the Bulgarian national weightlifting team finished a head to head comparison study to assess the positive effects of Kre-Alkalyn® versus the more ubiquitously available non-buffered creatine monohydrate. It should be noted that it is quite difficult for high-caliber Olympic-level athletes to produce considerable improvements in their muscular performance in such a short time-frame. Furthermore, these athletes were able to increase their average number of snatch, clean and jerk, high snatch and back squat numbers by 10.76% over baseline compared to only 8.39% for the creatine monohydrate group. There is additional evidence that increasing creatine supplementation may lead to more creatine bioavailability, since it is not lost as the creatine byproduct creatinine (Figure 3). However, creatine excretion wasn’t measured in this study, so it is possible that all athletes were excreting excess creatine.

During this study, there was no indication that creatine in its traditional formulation, nor in Kre-Alkalyn® led to ergolytic effects. Indeed, participants remained healthy during the 8 week period as noted through various physiological tests including no significant changes in the amount of lactate dehydrogenase (LDH) released, a measure of tissue damage [9], before and after the eight week study. Furthermore, no significant changes were seen in WBC, hematocrit, and cholesterol markers of health (Figure 4).

Overall, these studies indicate that Kre-Alkalyn® is a useful supplement for increasing stamina and strength for athletic performance, performing similarly to the well-studied creatine monohydrate, however more detailed analysis, longer testing periods and larger patient populations should be tested to bring these proof-of-concept studies to appropriate power.

©2015 Golini J.This is an open-access article distributed under the terms of the Creative Commons Attribution License, which permits unrestricted use, distribution, and reproduction in any medium, provided the original author and source are credited.