Severe acute respiratory distress syndrome (ARDS) complicated with disseminated intravascular coagulopathy (DIC) is a life-threatening disease in childhood for which there is few confirmed therapeutic strategies. Recombinant human soluble thrombomodulin (rhTM) has been widely used for the treatment of DIC as an anti-coagulant agent. In addition to anti-DIC effects, recent evidences demonstrated that rhTM could improve ARDS in adult patients via anti-inflammatory effects. On the other hand, the safety and efficacy of rhTM on pediatric ARDS with or without DIC are unclear. In this preliminary study, we administered rhTM for 6 days to two infants with pneumonia-induced severe ARDS (PaO2/FiO2 ratio ≤ 100 mmHg) with DIC, and investigated clinical course and changes in biochemical markers. After administration of rhTM, clinical symptoms and laboratory data improved in both infants and there was no adverse effect of rhTM. The infants were successfully treated and discharged without any complications.

Pneumonia is a leading infectious cause of death in childhood worldwide and 15% of all deaths in children under five years old [1]. Pneumonia can cause acute respiratory distress syndrome (ARDS) [2,3] and severe ARDS occasionally can induce disseminated intravascular coagulopathy (DIC). Severe ARDS complicated with DIC is one of the lethal conditions of the disease in intensive care unit and the effective treatments remains to be determined [4,5].

A 8-week-old Vietnamese infant girl, without a particular family history and a past medical history, was referred to a local hospital with 2 days history of cough, wheeze and mild fever. She was diagnosed as pneumonia and was medicated azithromycin on the day 3rd (the day of onset of the illness defines the day 1st). Over the next 48 hours, she was getting worse with dyspnea and high fever. She was sent to our hospital on the day 6th. Physical examination on admission showed an infant with weight of 5.7 kg; length of 53 cm; body temperature of 38.0ºC; heart rate (HR) of 150 beats/min; and oxygen saturation level (SpO2) of 60% in room air. At the night, she was tracheal intubated and was transferred to pediatric intensive care unit (PICU) on the day 7th, her blood pressure had dropped to 65/35 mmHg with HR of 154 beats/min. The first arterial blood gas analysis in PICU showed pH, 7.37; partial pressure of oxygen (PaO2), 36 mmHg; and partial pressure of carbon dioxide (PaCO2), 61 mmHg; and bicarbonate (HCO3-), 35 mmol/L, under the mechanical ventilation with 100% oxygen administration. The PaO2 to the fraction of inspired oxygen (FiO2) ratio (P/F ratio) was consequently 36 mmHg. Chest X-ray showed bilateral infiltration, with normal heart size (Figure 1). She was diagnosed as severe ARDS developed from pneumonia [11,12]. The Pediatric Risk of Mortality (PRISM) III score was assessed using parameters obtained during the first 12 hours of stay in the PICU and her PRISM III score was 10 [13] . Laboratory findings were as follows, white blood cell (WBC) count 28,000 cells/µl; red blood cell (RBC) count 297 × 104 cells/µl; platelet (PLT) count 271 × 103 cells/µl; aspartate aminotransferase (AST) 875 U/L; alanine aminotransferase (ALT) 325 U/L; blood urea nitrogen (BUN) 14.1 mg/dL; creatinine 24 μmol/L; CRP 18.1 mg/dL; fibrinogen 4.71 g/L; and prothrombin time (PT)16.1 seconds. No bacteria and fungi were detected in blood neither by culture nor by LightCycler SeptiFast Test (Roche Diagnostics GmbH, Manheim, Germany) which detected and differentiated up to 25 pathogenic microbial DNAs in blood samples using a multiplex polymerase chain reaction (PCR) system [14]. The genomes of respiratory syncytial virus (RSV) and cytomegalovirus (CMV) were detected in tracheal lavage fluid (TLF) by real time PCR assay. CMV-DNAs were detected both in TLF and blood and the copy numbers were 1000 copies/ml in either sample. She was treated as severe ARDS/sepsis developed from RSV pneumonia. 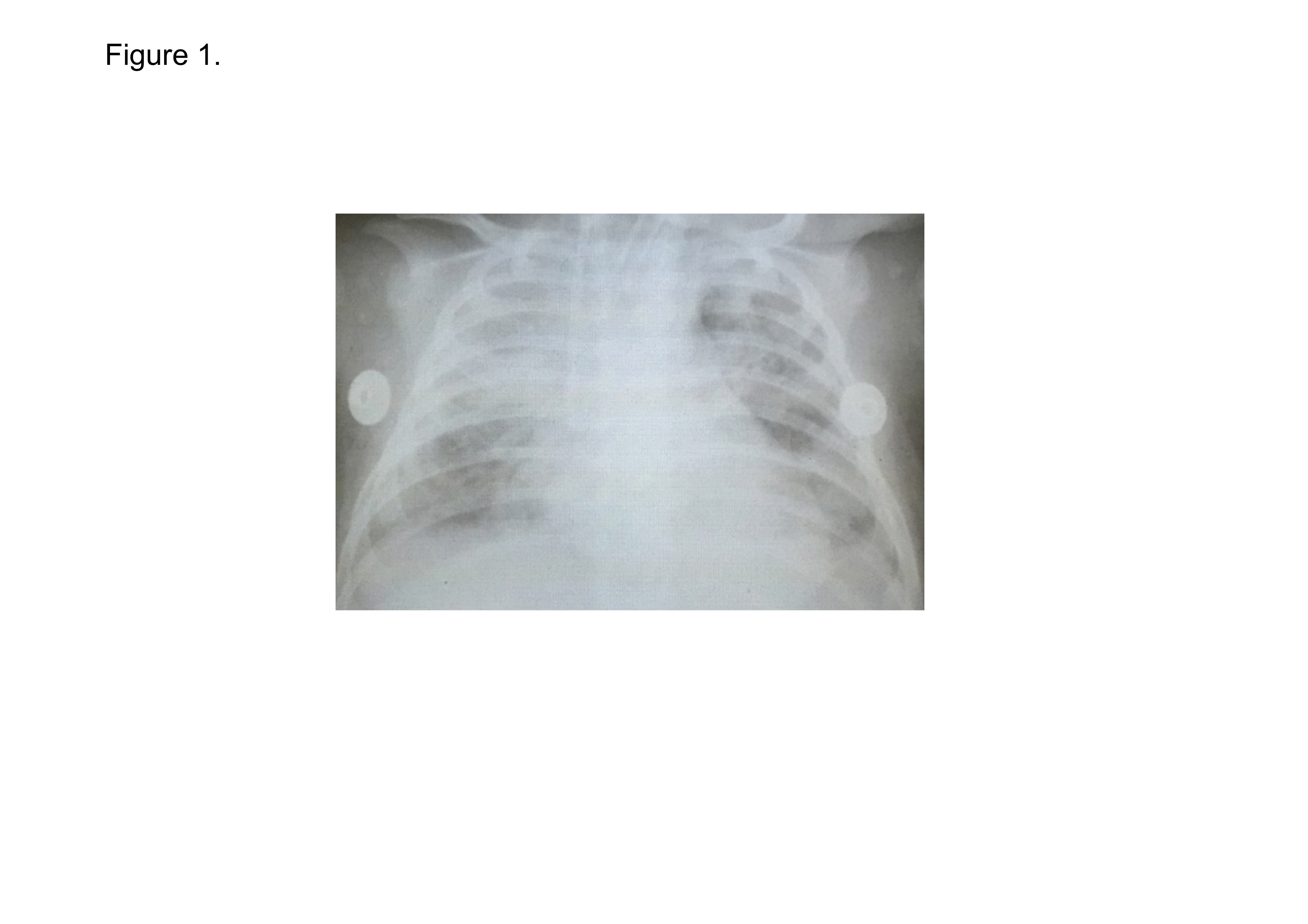 Figure 1. Chest X-ray on admission to PICU in Case 1.

To correct an insufficient circulation, dopamine hydrochloride was administrated and 1 g/kg of immune globulin was given intravenously for 10 hours for severe sepsis on the day 7th. As lung protective therapy, pressure controlled volume limited mechanical ventilation had begun according to a protocol, with 12 cmH2O PEEP and 5 - 8 ml/kg tidal volume [15]. PEEP and FiO2 were reducing gradually depends on the P/F ratio. For prevention of secondary bacterial infection, broad spectrum antibiotics, 60 mg/kg/day of imipenem/cilastatin (IPM/CS) and 20 mg/kg/day of levofloxacin (LVEX) were started from the day 9th. On the day 9th, International Society on Thrombosis and Haemostasis (ISTH) DIC score increased to 5 (PLT 55,000/µl; fibrinogen 4.83 g/L; D-dimer 1014 ng/mL; and PT 19.7 seconds), presenting a complication of DIC and the DIC score continued to increase for next 2 days [16]. Therefore, for the treatment of DIC, 380 U/kg of recombinant human soluble therombomodulin (rhTM) in 100 ml normal saline was administered as intravenous drip infusion for more than 30 minutes for 6 days from the day 11th. All necessary treatment that PICU doctors did was acceptable except administration of contraindication for co-administration of thrombolytic agents or tissue plasminogen activators or platelet aggregation inhibitors with rhTM. Hepatorenal function was almost normal throughout the rhTM administration. The DIC score and the P/F ratio had been improving gradually, and she was extubated on the day 15th.

On the same day, she had high fever (38.8 ℃). The TLF culture showed Acinetobacter infection and the CMV copy numbers increased to 2.3 × 105 copies/ml in blood, suggesting a complication of CMV disease. Colistin (CL), Amicacin (AMK) and ganciclovir (GCV) were started from the day 16th.  The fever went down and she moved from PICU to respiratory department on the day 17th.  The clinical course in PICU was shown in Figure 2 and Table 1. She was successfully treated of severe ARDS/sepsis with DIC and discharged from hospital on the day 28th. 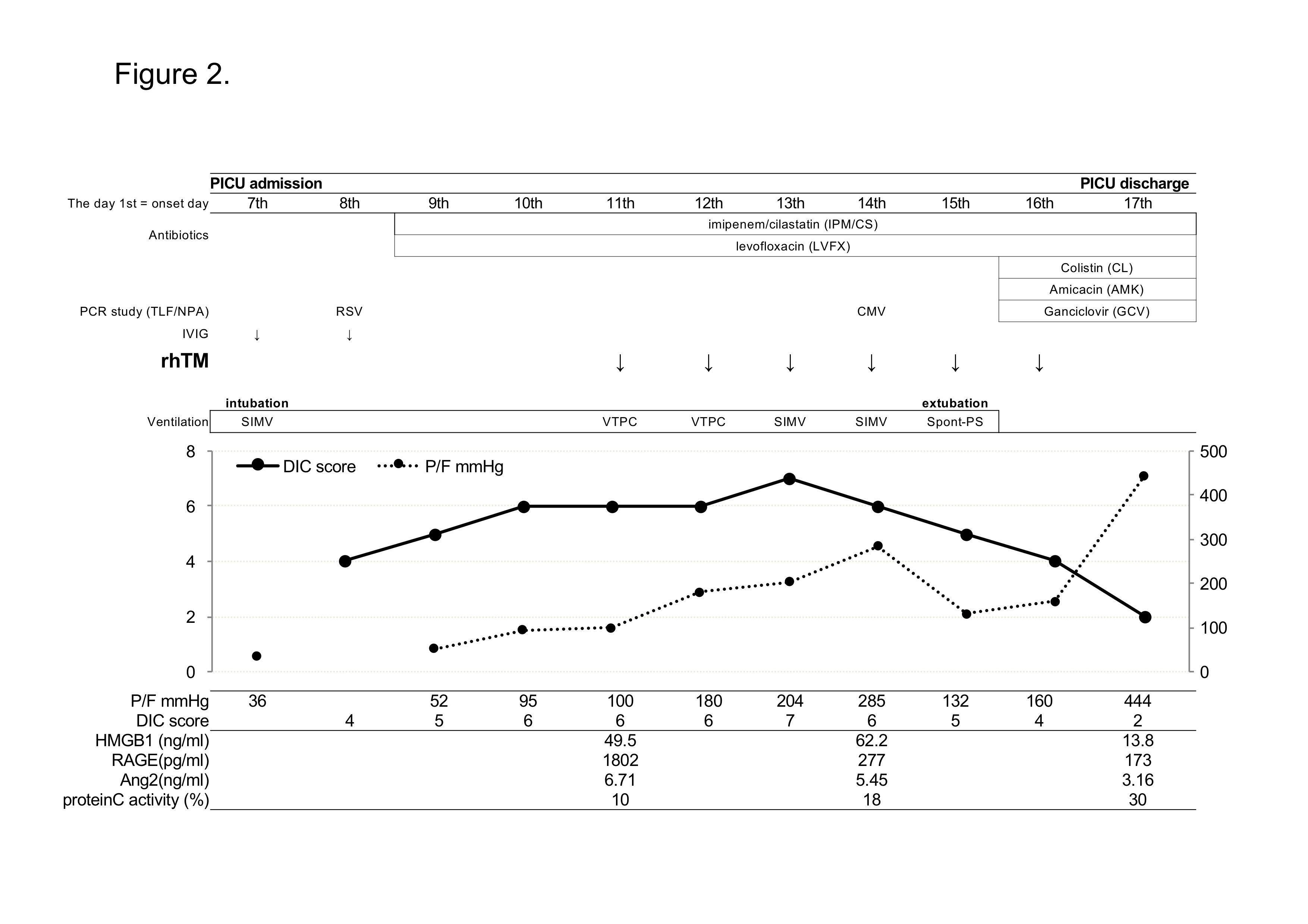 A 3-month-old Vietnamese infant boy went to a private clinic with 2 days of nasal congestion, cough, and mild fever. Though he had started antibiotics on the day 3rd, he was getting worse with high fever, wheeze and dyspnea during the next 4 days. After he went to a local hospital on the day 8th, he was admitted to an emergency department of our hospital on the day 9th. He had past history of recurrent pneumonia three times for 3 months. Physical examination on admission to emergency department showed an infant with weight of 5.0 kg; length of 52 cm; body temperature of 39.0 ºC; blood pressure of 54/34 mmHg; HR of 177 beats/min; and SpO2 of 85% in room air. PRISM III score was 9. He was performed tracheal intubation quickly and sent to PICU, immediately. The arterial blood gas analysis in PICU showed PaO2, 69 mmHg and PaCO2, 115 mmHg under the mechanical ventilation with FiO2 1.0, consequently P/F ratio was 69 mmHg. His chest X-ray showed bilateral infiltration without findings of heart failure (Figure 3). Laboratory findings were as follows, WBC count 24,000 cells/µl; RBC count 330 × 104 cells/µl; PLT count 445 × 103 cells/µl; AST 361 U/L; ALT 149 U/L; BUN 10.4mg/dL; creatinine 56 μmol/L; CRP 0.3 mg/dL; fibrinogen 1.79 g/L; and PT 17.9 seconds. No bacteria and fungi were detected in blood neither by culture nor by SeptiFast. Genomes of CMV (8.6 × 106/ml) and pneumocystis jirovecii were detected in TLF by real time PCR assay. Adenovirus, Human rhinovirus, Mycobacterium tuberculosis were negative.  He was suspected of CMV disease and Pneumocystis pneumonia (PCP). Administration of 10 mg/kg/day of ganciclovir and 480 mg/days of S-T combination (Sulfamethoxazole-Trimethoprim, SMX/TMP) were started. For prevention of secondary bacterial infection, administration of IIPM/CS and LVFX was initiated. Human immunodeficiency virus (HIV)-IgG was detected in plasma by ELISA and HIV-RNA was detected in plasma on the day 13th. CD4-positive T cell number was 1640/μl on the day 10th and 847/μl on the day 28th. He was treated as severe ARDS/sepsis developed from CMV disease and PCP with HIV infection. 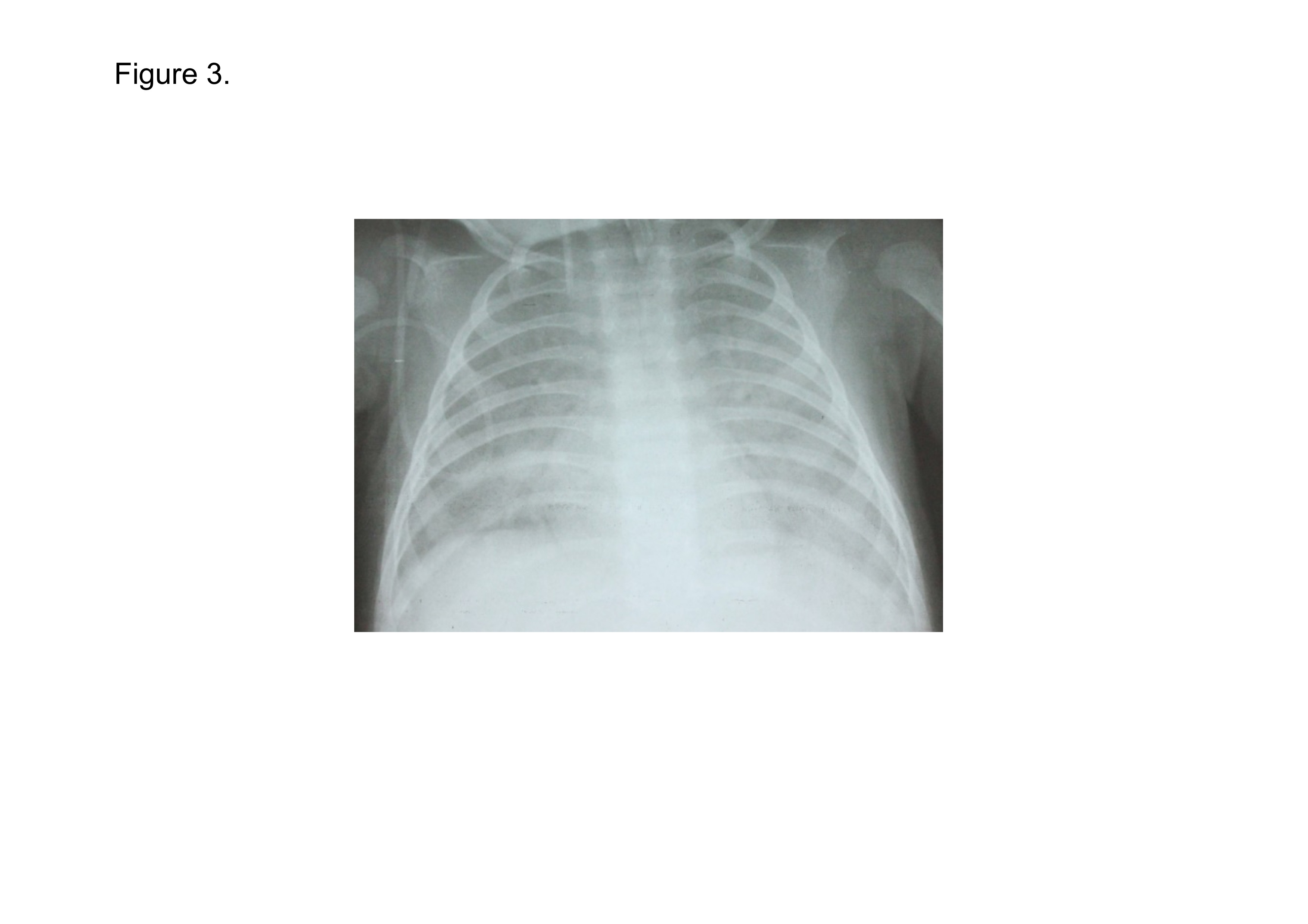 Figure 3. Chest X-ray on admission to PICU in Case 2.

On the next day of PICU admission (the day 10th), ISTH DIC score reached to 5 (PLT 132,000/µl; fibrinogen 0.75 g/L; D-Dimer 4840 ng/mL; PT 23.3 seconds), presenting a complication of DIC and administration of 380 U/kg/day of rhTM was started on the same day. In addition, to control of inflammation, 1 mg/kg of immunoglobulin was administrated intravenously for 2 days. The P/F ratio were improving gradually and he was extubated on the day 15th. DIC score and laboratory data of AST/ALT also had been improved during the stay in PICU (Figure 4, Table 2). He had recovered from severe ARDS with sepsis/DIC successfully and moved from PICU to AIDS control center (ACC) for the treatment of anti-retroviral treatment on the day 16th and discharged on the day 42th. 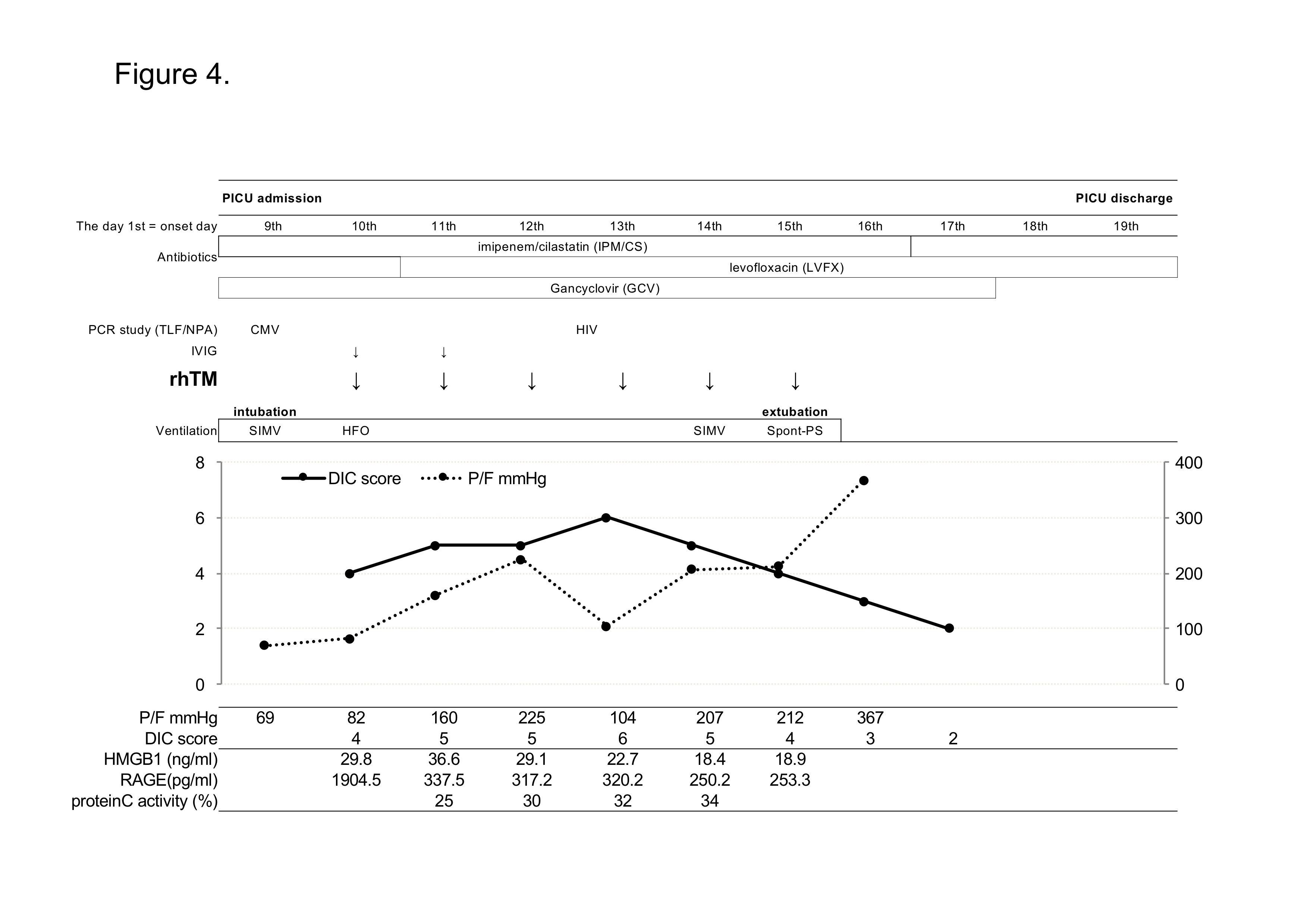 We reported 2 Vietnamese infants under 3-month-old with severe ARDS/sepsis with DIC, which was developed from RSV pneumonia and PCP, respectively. The infant in Case 2 was infected with HIV and was suspected of immune dysfunction. Severe ARDS is generally thought as one of the most lethal conditions of the diseases in pediatric intensive care field. In our hospital, a PICU-mortality in patients with severe ARDS/sepsis has been more than 50%. Therefore, the prognosis of these 2 infants were thought to be very severe on admission. We did a combination therapy including a lung protective support by a ventilator, medication of antibiotics and anti-viral drugs for pulmonary sepsis, high-dose IVIG therapy to control inflammation, and administration of rhTM for anti-DIC. Both cases were the first cases that rhTM had been administered to Vietnamese infant in Vietnam. RhTM is a new anticoagulant agent that has both anti-coagulatory and anti-inflammatory effects and was introduced clinically on April 2008 in Japan [6]. Recently it is suggested that rhTM improved not only mortality in patients with sepsis-induced DIC but also respiratory dysfunction in patients with severe sepsis resulting the marked improvement of lung injury scores after administration of rhTM [17,18]. We administered rhTM according to the standard formula of rhTM (380 U/kg/days, 6days) and succeeded to improve both DIC score and P/F ratio (Figure 2,4). It was unknown how much the rhTM administaration contributed to the improvement of P/F ratio in the presented cases.

We examined plasma levels of thrombomodulin, protein C activity, high mobility group box 1 (HMGB-1), and soluble receptor for advanced glycan endproducts (sRAGE) before and after rhTM administration. The rhTM is thrombomodulin-alfa and its pharmaceutical action in the human body is same as thrombomodulin [6]. The levels of thronbomodulin increased after rhTM administration and kept high concentration during rhTM therapy (data not shown). It is discussed that thombomodulin activates protein C and activated protein C had anti-inflammatory property [19]. In fact, protein C activity in Case 1 and Case 2 increases from 10% to 30% and 25% to 34%, respectively, before and after rTM administration. This suggested the efficacy of rhTM to increase protein C activity. HMGB1 has been reported to be one of the late mediators and one of the damage-associated molecular patterns (DAMPS) associated with innate immunity [20-22]. Thrombomodulin binds to HMGB-1, aids the proteolytic cleavage of HMGB1 by thrombin, and degrades HMGB-1 [23]. The plasma levels of HMGB1 was high before administration of rhTM, and it started to decrease a few days later than the administration start date (Figure 2 and 4). Increased levels of HMGB1 and sRAGE are reported to be associated with lung inflammations [24]. RAGE is reported to be a marker of Type I alveolar epithelial cell injury and plasma levels of sRAGE is significantly higher in patients with acute lung injury than healthy volunteers [25]. Though the plasma levels of sRAGE were high before rhTM administration in both cases (1802 pg/ml in Case1 and 1905 pg/ml in Case 2, normal: 170 pg/ml), after rhTM administration, the levels of sRAGE decreased rapidly (Figure 2, 4). This was not efficacy by IVIG but by rhTM, because IVIG and rhTM were administered on different day in Case 1.

Our research was supported by the Research Program on Emerging and Re-Emerging Infectious Diseases from the Agency for Medical Research and Development, Japan.

The authors state that they have no conflict of interest.

This study was approved by the biomedical research ethics committee of National Hospital of Pediatrics Research Institute for Child Health (NHP-RICH, Hanoi, Vietnam) (reference number: NHP-RICH-15-008) and ethical committee of National Center for Global Health and Medicine (NCGM, Tokyo, Japan) (reference number: NCGM-G-001853-00) and written informed concent was obtained from the parents according to the study protocol.

© Phuc PH. This is an open-access article distributed under the terms of the Creative Commons Attribution License, which permits unrestricted use, distribution, and reproduction in any medium, provided the original author and source are credited.

Figure 1. Chest X-ray on admission to PICU in Case 1.

Figure 3. Chest X-ray on admission to PICU in Case 2.