Methods: Drug containing lipid-based systems that could form SEDDS were prepared with vehicles including Labrafil®M1944CS and Labrasol with or without Capryol™90 or Solutol®HS15. The key quality attributes of SEDDS were determined in terms of size distribution and drug dissolution profiles. Other properties evaluated were critical micelle concentration (CMC), zeta potential and solubility profiles.

Results: SEDDS formed negatively charged dispersions of typically 170-250nm and their CMC were <110mg/L. All SEDDS achieved rapid and significantly higher drug release, which were maintained over 90min when compared to unprocessed drug powder. Dissolution enhancement and size distribution profiles of SEDDS stored at 25 and 40ºC were preserved. Enhancement effect of SEDDS was contributed to formation of stable nano-sized dispersions, high drug solubility in SEDDS and low CMC that withstood dilution by dissolution medium.

Conclusions: Lipid-based systems with Labrasol, Labrafil®M1944CS and Capryol™90 produced SEDDS that led to a significant dissolution enhancement of Indapamide regardless of storage conditions.

Drug particle that presents with limited aqueous solubility tend to exhibit poor dissolution profile. This can hamper oral drug absorption that has been related to issues of low and unpredictable bioavailability and lacking dose proportionality [1]. Hence dissolution enhancement for these drugs is crucial to avoid therapeutic failures. Key enhancement approaches include solubility improvement such as via salt formation and dissolution rate enhancement such as forming solid dispersions or self-emulsifying drug delivery system (SEDDS), each approach has its cons and pros despite showing enhancement for certain hydrophobic drugs [2-4]. Indapamide is a thiazide-like diuretic with antihypertensive effects. It is a weak acid and the partition coefficient for indapamide is higher than other diuretic agents including furosemide, hydrochlorothiazide and chlorthalidone [5]. It falls under Biopharmaceutical Classification System (BCS) Type 2 (low solubility and high permeability) [6]. Producing amorphous forms of Indapamide by spray drying [7,8], quench-cooling of the melt, cryogenic grinding and room temperature milling [9,10] have been shown to improve drug solubility against its crystalline form. And drug precipitation could be avoided by adding small amount of hydroxypropyl methylcellulose. Lipid-based systems that generate SEDDS have shown success with several marketed products being adopted [11]. This study aimed to investigate the feasibility of SEDDS as solubility and dissolution enhancing approach for Indapamide. In order to produce lipid-based systems, Labrasol with Hydrophilic-Lipophilic Balance (HLB) of 12 and Labrafil®M1944CS (HLB 9) have been chosen as the key components while CapryolTM90 (HLB 5) or Solutol®HS15 (HLB 14-16) as the third component. These vehicles and their mixtures have previously been reported to enhance drug dissolution profiles [12]. Effect of blending these vehicles in different drug to lipid ratios to produce lipid-based systems, which were suitable as SEDDS for Indapamide, were examined. Performances of SEDDS were analysed based on their size, charge, morphology, solubility and dissolution profiles. Furthermore, the critical micelle concentration (CMC) of SEDDS was determined. The stability profiles of SEDDS were also examined in terms of size distribution and dissolution profiles.

Lipid-based vehicle systems were prepared by blending Labrafil®M1944CS and Labrasol with and without CaproylTM90 or Solutol®HS15. Indapamide was dissolved in the lipids at a specific drug to lipid ratio at 60°C (Table 1). The mixture was cooled to 25°C and then vortexed until clear liquids were obtained. For sample characterisation, dissolution study using USP dissolution apparatus II (Caleva Ltd., Dorset, UK) was performed on unprocessed Indapamide powder, marketed generic tablets and SEDDS (all samples contained 5mg of drug). Each sample was placed in 900mL water (as dissolution medium) at 37±1°C and stirred at 100rpm. A 10mL sample was withdrawn at fixed intervals for up to 90min and an equal amount of distilled water was replaced. Samples were analysed for drug levels by a high-performance liquid chromatography (HPLC) assay (Figure S1). Solubility study was conducted by placing an excessive amount of drug powder in either individual excipients or lipid-based systems. Samples were mixed and equilibrated for 48h at 37oC. After centrifugation, appropriate amount of supernatants were diluted in up to 50 ethanol before HPLC analysis. Lipid-based systems (same quantity used as dissolution test) were diluted in water forming SEDDS, then size distribution and zeta potential were determined using Malvern Zetasizer Nano ZSP (Cambridge, UK) [13] while the morphology of SEDDS was examined by transmission electron microscopy (TEM) (Hitachi H700, Japan) after negative staining by 2% PTA and positive staining by 2% OST [14]. Surface tension values of diluted SEDDS were determined by a tensiometer (Attension Sigma 700/701, Sweden) attached to a platinum ring from 1g/L stocks [15]. Following this, the critical micelle concentration (CMC) values of SEDDS were determined. The dissolution and size distribution profiles were also determined after three- and six-months of stability tests for lipid-based systems stored at 40°C and 25°C, respectively. All experiments were repeated trice. One-way ANOVA was conducted to examine whether there is statistically significant difference among the groups and Tukey HSD was selected as Post Hoc test. The significance level used was 0.05.

Determination of drug concentration by HPLC: The drug levels of were analysed after a separation process by High-performance liquid chromatography (HPLC), using Agilent 1290 Infinity series LC system with a binary pump (G4220A). The HPLC system was attached to a reversed phase column (4.6 x 150mm, Hichrom 5µm, C8 type, Hichrom, UK). The mobile phase was made of acetonitrile/10mM phosphate buffer pH 3 at 38/62 (v/v).  Flow rate of the mobile phase was set to 1mL/min. The injection volume was 1µl and the run time was 7min for each sample. An UV-Vis detector (VWD G1314E) that was attached to HPLC was used to detect Indapamide at 242nm. Drug standards ranging between 1.12 and 6.72mg/mL were used.  Following integration of drug peak areas, calibration plot and its equation was obtained (Fig. S1). The limit of detection was 0.14mg/mL and limit of quantitation was 0.54mg/mL.

The lipid-based systems were then prepared by using different drug to lipid ratios (1/10, 1/20, 1/30) initially and stored at 25°C. Periodically, the samples were examined visually. Samples were excluded if they phase separated. Those remaining as clear or transparent liquids were considered as stable and were selected for further analysis (Table 1). The mean sizes of SEDDS were in the range of 170-250nm (Figure 2), indicating the formation of dispersed nanostructures. This is due to relatively high HLB values of these lipid-based systems and low free energy requirement for self-emulsification to occur [16]. SEDDS with 10% Solutol®HS15 (batch ID=S130), which is considered most hydrophilic, exhibited the smallest size (p<0.05) while SEDDS devoid of the third component (ID=B130) possessed the highest polydispersity index (PDI) with a less uniform size distribution. Hence, incorporating Solutol®HS15 or CapryolTM90 as co-surfactant that changed interfacial fluidity was found to be beneficial to self-emulsification process [16].

Aggregation of surface-active agents occurs when their bulk concentrations reach a critical point, which is referred to as CMC. The dispersed nanostructures of SEDDS following dilution of lipid-based systems are advocated to exhibit similar properties, where these droplets are stabilised by a thin layer of surfactants surrounding the oil cores (consisting dissolved drug molecules) that lowers the interfacial energy and induces either charge or steric effect [12]. Negative zeta potential values ranging from -29 to -36mV were observed for all SEDDS, where SEDDS with 10% CapryolTM90 (ID=C110) at drug to lipid ratio of 1/10 gave the most negative value and the values declined as drug to lipid ratios increased (Table S1). As Indapamide behaves as a weak monoprotic acid, it can contribute to small increment in zeta potential values as the amount of dissolved drug increased in SEDDS (5). Images from TEM showed that nanostructures in SEDDS were round to oval in shape after negatively stained with PTA, where the droplet appeared bright in contrast to the surrounding shell, which was darker. This observation was further confirmed by applying a positive stain using OST where oil cores of the droplets were very dark imparting higher contrast level against the shells (Figure 3) [14]. CMC values of SEDDS were in the range of 86-108mg/L (Figure 2), consistent with ranges previously reported [4]. The highest CMC was seen in SEDDS with the smallest drug to lipid ratio (1/10; ID=C110), which presented with the largest quantity of dissolved Indapamide. The lowest CMC was observed in SEDDS with 10% Solutol®HS15 (ID=S130) where droplet size of SEDDS was the smallest. When comparing the effect of lipid compositions, it was found that there was no significant difference of CMC values among SEDDS at the same drug to lipid ratio. Low CMC is associated to greater tendency to produce micelles for a given system. This may lead to a lesser risk of failure, as the system will be less prone to dilution effect that can result in drug precipitation [2,4].

Drug dissolution profiles of SEDDS alongside unprocessed powder and marketed tablets were presented (Figure 4). As expected, all SEDDS attained rapid and high drug release after exposure to the dissolution medium as opposed to unprocessed powder and marketed tablets where drug dissoluion occurred more gradually [17]. The overall drug release for unprocessed drug, marketed tablet and SEDDS were 47%, 91% and 97-98%, respectively, where dissolution enhancement from SEDDS was significantly higher (p<0.05). Percentages drug release of SEDDS were maintianed over the study period, confirming that SEDDS not only accomplished its solubilisation effect but also showed a ‘supersaturation effect’ as high level of drug re-precipitation was not observed in SEDDS [18]. This was not only contributed to blending Labrasol with other surfactants [19,20] but also high drug solubility with low CMC of these SEDDS for preparations containing 5mg of Indapamide, which was a standard dose for the marketed products.

Stability profiles of SEDDS were observed for up to 6 months under normal storage condition (25oC) and at high temperature (40ºC). The dissolution profiles of SEDDS at 3- and 6-months exhibited same patterns and they were not significantly different when compared to fresh samples when stored at 25oC (p>0.05) (Figure S2). At 40oC, similar pattern was observed except for SEDDS with 10% Solutol®HS15 (ID=S130) where the overall release was reduced to 91% possibly due to limited re-precipitation. Thus, dissolution enhancement by SEDDS was not compromised for most SEDDS. When comparing size distribution of the stored SEDDS, they were similar to their respective fresh samples, for instance, SEDDS with 10% Solutol®HS15 with the smallest size and SEDDS without the third component gave the highest PDI regardless of the storage temperatures (Figure S3&S4). Nonetheless, stored samples tend to form smaller droplets without affecting PDI patterns (p>0.05) partly due to aging or heat exposure. Hence, the stored lipid-based systems maintained their self-emulsifying capacity. 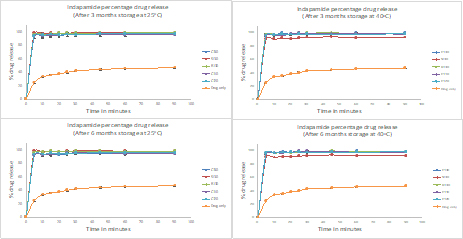 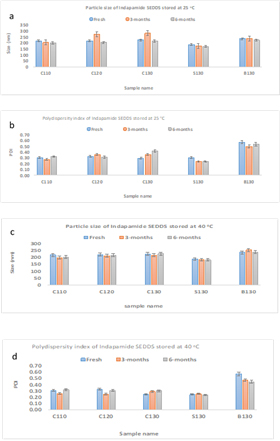 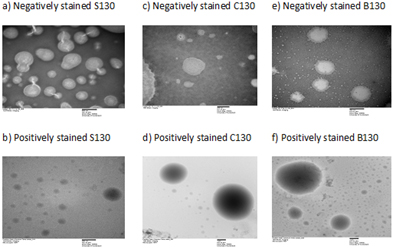 In this study, lipid-based system consisting of Labrasol, Labrafil®M1944CS and Capryol™90 has been considered as the best preparation as it can self-emulsify into SEDDS with small size distribution and with significantly enhanced Indapamide dissolution at the smallest drug to lipid ratio. Moreover, independent of drug to lipid ratios, the SEDDS remains stable for up to six months regardless of storage conditions. The dissolution enhancement was resulted from the ability of this lipid-based system to self-emulsify with formation of stable nano-sized dispersions, high drug solubility in SEDDS and low CMC of the dispersed system to withstand dilution by dissolution medium.

All the authors of this manuscript report no declaration of conflict of interest.

©2020 Saleh A. This is an open-access article distributed under the terms of the Creative Commons Attribution License, which permits unrestricted use, distribution, and reproduction in any medium, provided the original author and source are credited.

Determination of drug concentration by HPLC: The drug levels of were analysed after a separation process by High-performance liquid chromatography (HPLC), using Agilent 1290 Infinity series LC system with a binary pump (G4220A). The HPLC system was attached to a reversed phase column (4.6 x 150mm, Hichrom 5µm, C8 type, Hichrom, UK). The mobile phase was made of acetonitrile/10mM phosphate buffer pH 3 at 38/62 (v/v).  Flow rate of the mobile phase was set to 1mL/min. The injection volume was 1µl and the run time was 7min for each sample. An UV-Vis detector (VWD G1314E) that was attached to HPLC was used to detect Indapamide at 242nm. Drug standards ranging between 1.12 and 6.72mg/mL were used.  Following integration of drug peak areas, calibration plot and its equation was obtained (Fig. S1). The limit of detection was 0.14mg/mL and limit of quantitation was 0.54mg/mL.