Autism Spectrum Disorder (ASD) represents a significant risk factor for epilepsy with an estimated prevalence of epilepsy in patients with ASD ranging from 2- 46% [1-3]. Clinically, the association between epilepsy and ASD is well characterized in tuberous sclerosis and early infantile epileptic encephalopathies such as West Syndrome. The pathogenesis of epilepsy and ASD are largely unknown, however, the association of these disorders suggests a shared underlying pathophysiology, possibly one of dysfunctional neuronal networks. While there is basic and translational research underway investigating the pathogenesis of both epilepsy and ASD, reliable biomarkers or diagnostic tests are not available to clinicians attempting to tease apart the complex interaction of these disorders.

Electroencephalogram (EEG) is a widely used diagnostic tool for the evaluation of epilepsy and encephalopathy. In ASD, EEG findings vary widely with published frequencies of epileptiform EEG abnormalities in children with ASD ranging from 6-85.8% [4,5]. Epileptiform discharges represent regions of cortical hyperexcitability, which indicate increased risk for seizures. However, in the absence of clinical seizures, the significance of epileptiform discharges is controversial and unclear. The ambiguity of the relationship between EEG findings and ASD has led to guidelines that discourage screening EEGs at the time of ASD diagnosis in the absence of a clinical suspicion for epilepsy [6,7].

Several studies have investigated the predictive value of epileptiform EEG abnormalities and their correlation to developing epilepsy in patients with ASD. One small study showed an increased risk for clinical epilepsy in children with ASD with frontal epileptiform EEG abnormalities, suggesting that dysregulation in this region could contribute to epileptogenesis in children with ASD [8]. Another retrospective study of 130 patients with ASD concluded that epileptiform EEGs predicted subsequent onset of epilepsy [3]. However, there were still high rates of epileptiform EEGs in the non-epileptic group. Moreover, 18% of patients with epileptiform discharges did not develop seizures suggesting that EEG has a high false positive rate in prognosticating subsequent development of epilepsy in ASD. Additionally, the epileptic group had significant differences from the non-epileptic group including higher rates of cognitive impairment, a lower level of adaptive functioning, and higher rates of prescribed psychotropic medications. This may indicate that these patients had more severe ASD or that severe epilepsy is associated with more significant autistic features and lower cognitive functioning. These confounders complicate any direct clinical inferences made to the utility of EEG in ASD without clear seizures.

Overall, there is a lack of data regarding evolution of EEG findings and development of epilepsy in children with ASD. Additional data regarding the evolution of EEG findings in children with ASD may lead to better understanding of the correlation between EEG abnormalities, onset of epilepsy, and ASD [1,9]. We present our retrospective review of children with ASD who had serial EEGs for clinical evaluation. We specifically sought to define the prognostic value of EEG and its relation to presence of clinical seizures, language impairment, and history of developmental regression.

The study population was identified by querying the neurophysiology database at Children’s Health Dallas for patients with the clinical diagnosis of ASD who had two or more EEGs between January 2002 and May 2015. All patients met clinical criteria for the diagnosis of ASD as per the Diagnostic and Statistical Manual of Mental Disorders (DSM-IV or V) or as diagnosed by a clinician [10,11]. Medical records were systematically reviewed specifically focusing on patient demographics, medical history, neurological examinations, EEG findings, and anti-seizure medication management. While reviewing medical histories, researchers paid close attention to concurrent diagnosis of clinical epilepsy, the presence of profound language impairment, and history of developmental regression. Clinical epilepsy was defined as children with EEG confirmed seizures, a diagnosed clinical epilepsy syndrome, clinical seizures including convulsive seizures, focal seizures with or without altered awareness, or other generalized seizures such as atonic, tonic, absence, and myoclonic seizures. Children without spells or staring spells that were distractible or of uncertain significance were defined as the non-epileptic group. Profound language impairment was defined as patients who were nonverbal or only had a few single words. Moderate language impairment was defined as patients who spoke in phrases or short sentences. Normal or near normal language was defined as children with no apparent language deficits on examination. Developmental regression was defined as a loss of developmental milestones such as speech, social interaction, or ability to perform activities of daily living per DSM-V [10]. All variables, including the diagnosis of epilepsy and ASD was determined at the time of the chart review.

Descriptive analysis of the continuous and categorical data was performed using means, confidence intervals, proportions, and frequencies. Chi-square and Wilcoxon Rank Sum tests, as appropriate to the variable’s level of measurement and distribution, were used to investigate associations and differences between sub-groups. Multiple logistic regression was used to model binary outcome based on multiple prognostic factors. The statistical analyses were performed with SAS 9.4.

There were 108 patients with ASD were identified with 331 EEGs performed. 71% of the patients were male and 58% were diagnosed with epilepsy. 17% had history of developmental regression (Table 1). The median age of onset of seizures was between five and six years of age (Figure 1). 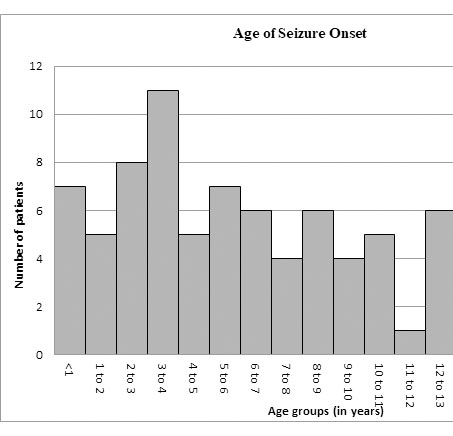 Initial EEG is a significant prognosticator of subsequent EEG findings

Although children with ASD and epilepsy had a higher occurrence of epileptiform EEGs (55.6%) as compared to children with ASD without epilepsy (45.6%), this difference was not statistically significant. A possible confounder is that our cohort had a high occurrence of epileptiform EEG abnormalities due to referral bias, as the reason for many of the children referred for multiple EEGs was likely due to a strong clinical suspicion for epileptic seizures. Additionally, it is possible that the study is underpowered to see a 10% difference between the two populations. Perhaps expanding the scope of this study to include more participants or addition of a control group (such as ASD with single EEG) could have unveiled a statistically significant association. Regardless, our data suggests that an abnormal EEG may not be a clear prognostic biomarker for epilepsy in patients with ASD. Utilization of video EEG monitoring, reviewing caregiver’s video recording of spells, and careful observation and documentation of spells concerning for seizures must play a critical role in making clinical diagnoses of epilepsy in children with ASD.

Several factors including age of onset of epilepsy, sleep/wake state, presence of specific epilepsy syndromes, and comorbid conditions contribute to the variable sensitivity of interictal EEGs in children with ASD. Although epilepsy is known to have a bimodal distribution of onset in ASD [13] the median age of epilepsy onset in our sample was 6 years old, seemingly skewed to the younger age of seizure or spell onset. Therefore, the age distribution of our sample may overestimate the presence of interictal epileptiform discharges (IEDs) observed in children with ASD and epilepsy as compared to the prevalence in the true ASD population. EEGs that include recordings in the sleep state are more sensitive for IEDs as compared to recordings in the wake state only. Additionally, certain epilepsy syndromes associated with ASD, such as Lennox-Gastaut Syndrome, are associated with higher frequencies of IEDs as compared to non-syndromic epilepsy. Our study did not control for sleep/wake state or epilepsy syndrome, which could confound our results and may explain our high rates of epileptiform discharges.

Children with profound speech impairment had a higher rates of epileptiform abnormalities (59.7%) as compared to those with normal or near normal speech (40.7%), but this difference did not meet statistical significance (p=0.2572). Syndromes such as Landau-Kleffner syndrome (LKS) and continuous spike wave of sleep (CSWS) suggest an association between language regression and frequent IEDs in sleep. However, it is unclear if IEDs are causal of language impairments in these disorders. Similarly, ASD is characterized by social and language dysfunction and one may hypothesize that higher IED burden in children with ASD may cause language dysfunction [18]. Alternatively, high IED burden and severe language impairment may be epiphenomenon indicative of greater neuronal dysfunction. ASD is a heterogenous disorder with multiple etiologies including idiopathic, structural brain abnormalities, genetic mutations, and metabolic disorders. Investigation of ASD using new technologies including advanced neuroimaging, whole exome, and whole genome sequencing are beginning to define causes of ASD. Differentiating molecular phenotypes and correlating clinical data in the future may further our understanding of the complex interaction between language dysfunction and IEDs in children with ASD.

Research reported in this publication was supported by the National Center for Advancing Translational Sciences of the National Institutes of Health under award Number UL1TR001105 (D.M.T). The content is solely the responsibility of the authors and does not necessarily represent the official views of the NIH.

©2018 Thodeson DM. This is an open-access article distributed under the terms of the Creative Commons Attribution License, which permits unrestricted use, distribution, and reproduction in any medium, provided the original author and source are credited.