We describe here a 17-year-old girl with a history of systemic lupus erythematosus presenting two episodes of erythema multiforme-like eruptions. A biopsy specimen showed superficial lymphocytic perivascular infiltrate, vacuolar alterations of the basal cells, and individual necrotic keratinocytes, which was consistent with erythema multiforme. These findings are most compatible with a diagnosis of Rowell syndrome. We also discuss the diagnostic difficulties in lupus patients developing bullous skin lesions.

Cutaneous manifestations are seen in about 80 % of patients with SLE and can occur at any stage of the disease, irrespective of the disease’s activity [1]. In addition to discoid lesions and malar rush which are included in the ACR criteria, there are a variety of other LE-specific and LE non-specific skin lesions [2]. Cutaneous lupus erythematosus (CLE) is divided into 4 subtypes: acute, sub-acute, chronic, and intermittent CLE [3]. The bullous eruptions in patients with SLE are rare [4]. A 2012 multicenter database analysis from the European Society of CLE (EUSCLE) found that the nonspecific lesions including bullous and Erythema Multiforme (EM) lesions were represented by less than 2% [5]. Bullous lesions in LE can be manifestations of Acute Cutaneous LE (ACLE), Bullous Systemic Lupus Erythematosus (BSLE), Bullous Subacute Cutaneous Lupus Erythematosus (SCLE) and Rowell’s syndrome.

Many other entities should be considered in the differential diagnosis: adverse drug reaction, blistering skin infections, and primary blistering disorders.

Rowell Syndrome (RS) is a rare entity consisting of EM lesions associated with lupus erythematosus. The original criteria of Rowell, described in 1963, consist of LE, EM-like lesions, speckled pattern of ANA, RF and saline extract of human tissue (anti-SJT) positivity which is now regarded as similar to anti-Ro [6]. There still is some debate over whether RS represents a separate entity [7].

We describe the case of a 17-year-old girl with systemic lupus erythematosus, presenting two episodes of erythema multiforme-like eruptions.

Systemic lupus erythematosus was diagnosed, and the patient was treated with prednisolone 60 mg daily. Over the following weeks the patient's symptoms improved and her prednisolone dose was slowly tapered.At that time hydroxychloroquine was added at a dose of 200 mg/day.

Four weeks later, she developed fever and bilateral conjunctivitis followed by painful erythematous lesions with a central blister,symmetrically distributed on the extensor sides of the extremities and the upper portions of the trunk. Typical target lesions were seen on the acral regions of the extremities, measuring about 1-2 cm in size (Figure 1). Erosions were noted on her lips and gingival mucosa. 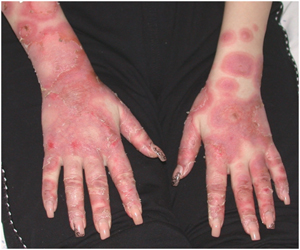 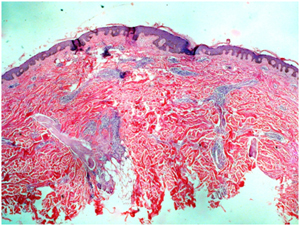 Figure 2. Lymfocytic perivascular infiltrate, vacuolar basal degeneration, and keratinocyte necrosis are of little help in distinguishing between EM and SCLE, because these changes may be present in both conditions.

A skin biopsy showed mild superficial lymphocytic perivascular infiltrate with few eosinophils, vacuolar alterations of the basal cells, and individual necrotic keratinocytes (Figure 2). Hydroxychloroquine was discontinued and the dose of prednisone was increased to 60 mg/day. Full remission of the lesions occurred after 2-3 weeks, leaving a residual hyperpigmentation. Over the next year, the patient experienced intermittent flares of SLE characterized by arthritis, facial discoid lesions and leukopenia. During this period, her treatment consisted of occasional use of NSAIDs, and prednisone 5–20 mg daily. Serial laboratory evaluations over this time revealed elevated levels of double-stranded DNA antibodies, and an increasing erythrocyte sedimentation rate. 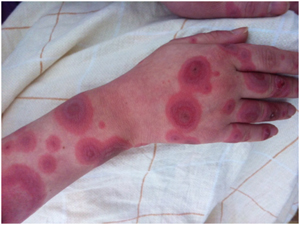 In August 2014, a second episode of widespread bullous eruption occurred accompanied by fever and arthralgia. The clinical picture consisted of typical EM target lesions almost identical with those in the first episode (Figure 3). The possible trigger factor was ciprofoxacine which she had taken for upper respiratory tract infection 3 weeks prior.

Disease activity score and laboratory data are included in Table 1. Except arthralgia further investigations showed no systemic involvement.The therapy was started with 60mg prednisolone/daily, with rapid resolution of cutaneous lesions in 3 weeks.

A patient with SLE displaying a bullous eruption presents a diagnostic dilemma. It is important that the physician eliminates the possibility of drug reaction, the association with primary blistering disorders, and considers the bullous forms of cutaneous lupus.

Blisters in LE may occur due to extensive vacuolar degeneration of the BM or due to antibodies of collagen VII [3]. Bullous lesions are included in the Dusseldorf Classification of CLE (2003) as LE-specific, LE-nonspecific bullous lesions and primarily bullous disorders associated with LE [3]. The modified Gilliam Classification divided bullous lesions into those that show or do not show LE specific histopathology [8].

Even though our case has some clinical similarities with BSLE, we exclude the diagnosis since BSLE demonstrates significant systemic disease activity. Histologically it is characterized by subepidermal bullae with predominantly neutrophilic infiltrate [9].

In this case, the skin and mucosal changes, and the histopathology were typical for EM, which lead to the diagnosis of Rowell syndrome. To date, over 71 patients with RS have been reported, but most of the cases do not fulfill all the clinical and serological criteria described by Rowell. Therefore in 2000 Zeitouni et al. redefined the criteria and proposed the expansion of the syndrome, including all forms of cutaneous lupus erythematosus [10]. Major criteria are lupus erythematosus, erythema multiforme-like lesions and speckled pattern of antinuclear antibody. Minor criteria are chilblains, positive anti-La (SS-B) or anti-Ro (SS-A) antibody and reactive rheumatoid factor. However, this expansion of criteria made the syndrome less specific.

In the last decade there have been many disagreements in regards to Rowell, and the existence of this syndrome has been questioned. Yachoui et al. states that RS represents a subset of SCLE with targetoid lesions, rather than a distinct entity [11]. Shadid et al. concludes that the simultaneous occurrence of clinical and immunological signs in RS is rather incidental [12]. In 2012, Antiga et al. reviewed all the 71 thus far published cases of RS and observed that the majority of cases should be considered as annular-polycyclic type of SCLE. They argued that a real association between LE and EM, present in about 20 patients, should be considered a mere coincidence that does not justify the framing of a separate syndrome [7]. The incidental appearance of EM in our patient should be taken into consideration. The basic factors causing EEM can be drugs or a respiratory infection.

SCLE was firstly described by Sontheimer et al. in 1979, as a different clinical subset of CLE which is characterized by papulosquamous and/or annular lesions in sun-exposed areas with mild or absent systemic involvement, associated with the human lymphocyte antigen (HLA)-DR3, and the presence of anti-Ro (SSA) antibodies [13]. The histological and clinical differentiation between SCLE and EM can be difficult. Herrero et al. found necrotic keratinocites histologically in 6 of 13 (46%) SCLE patients with vesiculo-bullous changes [14]. Also Mendoca reported overlap between SCLE and EM, from repeated biopsy of lesions previously read as EM which later showed elements of SCLE [15]. According to the characteristics of EM and SCLE [16] (Table 2) the differential diagnosis is based on clinical appearances, histopathology and serologic findings.

According to Orozco-Topete et al., patients with SLE have a higher risk of developing an adverse cutaneous drug reaction [17]. In the case described herein, a temporal relationship between administration of the hydroxychloroquine in the first episode, and the ciprofloxacine in the second episode, exists. Antimalarials, chloroquine and hydroxychloroquine, first-line treatment for patients with mild SLE, have been associated with a number of potentially serious adverse effects [18].

The literature describes four cases of patients with LE where the eruption appeared after the medicament was administered [19-22]. Aydin et al. presents a case in which hydroxychloroquine was a suspicious factor [20]. Aydogan et al. describes a case of a patient with an overlap of SLE and Sjogren syndrome whereby 2 months after starting hydroxychloroquine an EM-like eruption appeared [19].

In the second episode ciprofloxacin was suspected. The absence of prior reports decreases the likelihood, but does not eliminate the possibility that ciprofloxacin may be a possible trigger.

Although we favored the diagnosis of Rowell’s syndrome, we could not make a differentiation between EM and SCLE. The patient had drug exposure that complicated the picture. Regardless of the exact diagnosis, hydroxychoroqiune and ciprofloxacine were the likely cause, and the patient was advised to avoid them in the future. This case highlights the challenge of diagnosing bullous eruptions in patients with LE.

©2014 Katerina D. This is an open-access article distributed under the terms of the Creative Commons Attribution License, which permits unrestricted use, distribution, and reproduction in any medium, provided the original author and source are credited.

Figure 2. Lymfocytic perivascular infiltrate, vacuolar basal degeneration, and keratinocyte necrosis are of little help in distinguishing between EM and SCLE, because these changes may be present in both conditions.