Ameloblastic fibro-dentinosarcoma of the mandible: a case report

Ameloblastic fibro-dentinosarcoma and/or fibro-odontosarcoma (AFDS/AFOS) is an extremely rare subtype of odontogenic sarcoma, in which limited amount of dysplastic dentine (dentinoid) and enamel is observed [1].

This case report describes the occurrence of AFDS in a 25-year-old female.

A 25-year-old Chinese woman was referred to the Department of Oral and Maxillofacial Surgery affliated to Nanjing Medical University, with an approximate half-month history of a painful swelling of the right cheek, slightly higher skin temperature and numbness of the right lower lip. Oral examination showed a diffuse swelling from the first mandible right premolar to the second right molar measuring 2.5 cm X 2.5 cm, with the mobility and dislocation of the first right mandible second molars. The anti-inflammatory treatment was not effective. CBCT showed an extensive, ill-circumscribed, unilocular, radiolucent area extending from the mandible right first premolar to the second molar, approximately 3cm in diameter. General examination showed no evidence of distant metastasis. Routine laboratory findings were unremarkable.

Thus the patient received the surgery. Grossly, the resected mass was a 3.0-cm bone defect of the right mandible (Figure 1). Microscopic examination of hematoxylin-eosin slides showed a neoplasm composed of the epithelial and malignant mesenchymal components. There were large ameloblastic epithelial islands with stellate reticulum-like areas (Figure 2). The mesenchymal component were also composed of large pleomorphic cells and nuclei, hyperchromatic nuclei, and atypical mitotic figures. Some amount of dentinoid material was found in the sarcomatous area composed of spindle cells (Figure 3). Immunohistochemically, amelo-blastic epithelium showed positive for pan Cytokeratin but negative immunoreactivity for SMA and Desmin protein. Malignant spindle cells were weakly positive for SMA but negative for pan Cytokeratin and Desmin protein. The Ki-67 labeling index was higher in the mesenchymal component compared with that in the epithelial component. The post-surgical course of the patient was uneventful.

Figure 1. The resected mass was a 3.0-cm bone defect of the right posterior mandible. 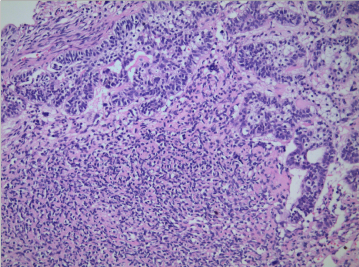 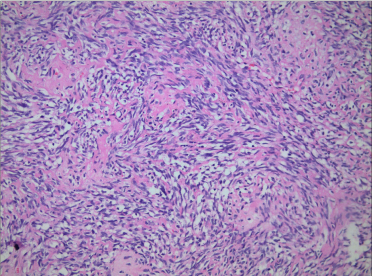 Figure 3. Some amount of dentinoid material was found in the sarcomatous area composed of spindle cells (HE×400).

To date, no more than seventeen cases of AFDS/AFOS have been reported in the English literature [1-3]. The present case should be the reported eighteenth one. There is a male predilection, the mean age of involvement is 27 years and the mandible in the posterior area is the more affected site [2-3]. A 4-year-old male presented with a painless mandibular swelling appearing 4 months ago [4]. The most common clinical features of AFDS are pain and swelling. The complaint of the reported young female patient was a painful fixed swelling at the right posterior region of the mandible.

Radiographically, AFDS/AFOS can show a uni or multilocular appearance with poorly circumscribed-demarcated outlines being associated with tooth and one or more dense opacities [5]. The present case showed irregular border and expansion and cortical bone perforation and the diagnosis of malignant odontogenic tumour should be suspected.

The diagnosis of AFDS/AFOS is made microscopically [2,6]. The presented case not only exhibited large areas of ameloblastic epithelium, and also contained the mesenchymal component showing increased cellularity with a sarcomatoid nature in isolated areas. The highly malignant cellular mesenchymal component with marked pleomorphism is essential for establishing diagnosis. There were also small areas with deposition of dentine material adjacent to spindle-shaped cells in the mesenchymal tissue. The combination of these features was the key to the diagnosis.

Immunohistochemically, intense staining of pan‑CK was observed in the epithelium, whereas the mesenchymal component were negative for pan‑CK in the reported case. The malignant mesenchymal part highly expresses proliferating cell nuclear antigen Ki‑67, which is negative or poorly expressed in the epithelial element, distinguishing the lesion from benign lesion. It is worth mentioning that malignant spindle cells were weakly positive for SMA but other mesenchymal component were negative for SMA.

Segmental resection with clear margins and long-term follow-up is the most recommended therapy for AFDS/AFOS [2,7,8]. Chemotherapy and re‑irradiation are recommended for AFDS/AFOS [2]. Our patient underwent a segmental mandibulectomy with the use of a vascularized free fibular flap as an osteocutaneous graft and selective neck dissection. A low mitotic rate, lack of necrosis and the dominant epithelial component are indicative of nonaggressive biological behavior. The patient showed no recurrence after 2 years of treatment without additional therapy.

This work was supported by the Nature Science Foundation of Jiangsu Province (Grants No BK20180669), educational research project of the Stomatological College of Nanjing Medical University (JX2019Y09), educational research project of Nanjing Medical University (2021ZC061), and the Health Committee of Jiangsu Province (Grants No M2020003).

©2022 Zhang W, Wu M, Ye J, Huan J, Jiang Y, et al. This is an open-access article distributed under the terms of the Creative Commons Attribution License, which permits unrestricted use, distribution, and reproduction in any medium, provided the original author and source are credited.

Figure 1. The resected mass was a 3.0-cm bone defect of the right posterior mandible.

Figure 3. Some amount of dentinoid material was found in the sarcomatous area composed of spindle cells (HE×400).