Multiple myeloma (MM) is a plasma-cell dyscrasia presenting with generalized neoplastic changes in bones, accompanied by impaired haematopoiesis and susceptibility to infections. To distinguish MM from other plasma cell dyscrasias, the diagnosis is based on histologic, serologic, and radiographic features: bone marrow clonal plasma cells; monoclonal protein in the serum or urine; and end-organ damage, evidenced by renal impairment, hypercalcemia, anemia, or lytic bone lesions. Sometimes, however, the clinical picture of MM is quite different from the classic manifestation, which can cause diagnostic difficulties, thereby delaying treatment. Importantly, symptoms of kidney damage may dominate over MM symptoms, and even preclude overt MM, and the diagnosis of MM often results from the workup of unexplained renal disease. Renal disease clinical presentation in MM includes acute kidney injury (AKI), nephrotic syndrome, proteinuria and/or haematuria, arterial hypertension and chronic kidney disease (CKD), occasionally, patients with MM present with renal tubular dysfunction [1-8].

LCPT is a unique entity which is less frequently reported as case reports and small case series. In LCPT the excessive LC, almost always of kappa type, are excreted through the kidney and reabsorbed in the proximal tubule cells, leading to tubular damage, sometimes resulting in the defects in acidification and concentration and, rarely, the features of complete acquired Fanconi syndrome (FS). Of interest, in many of the LCPT cases renal manifestations dominated in the clinical presentation, patients did not have typical features of MM, and the diagnosis was predicated upon thorough immunopathology assessment of renal biopsies material. Most of these patients present with moderate CKD, slowly progressing towards ESRD and rarely – to symptomatic myeloma, and according to the International Kidney and Monoclonal Gammopathy Research Group (IKMGRG) definition regarded as monoclonal gammopathy of renal significance (MGRS) cases [19-31].

As only very few series of LCPT have been published, the evidence for the treatment efficacy is very weak, and the results of the so-called novel anti-myeloma agents has not been evaluated in these patients. According to the recommendations of the IKMGRG treatment choices should be adapted to the degree of renal failure. Thus in patients with stages 1 to 3 CKD, chemotherapy should be considered to try to slow progression to ESRD, cyclophosphamide-, bortezomib-, or thalidomide-based regimens are the best options [31]. Treatment of LCPT patients, presenting with AKI is not described in the literature, however the study of LC-induced AKI in the patients with cast-nephropathy demonstrated substantial improvement of renal function, mainly in cases with less severe renal impairment [32].

Here we present two cases of MM, manifested with kidney disease, and diagnosed on the basis of immunopathology evaluation of renal tissue.

History of present illness: February 2015 during outpatient annual work-up proteinuria 1.8 g/L was found. December 2015 proteinuria increased to 5 g/L and he was referred to our clinic.

Bone marrow smear: 63.5% of plasma cells, including 2- and 3-nuclear forms and cells with flammeous cytoplasm.

Treatment and follow-up: patient was referred to the hematology unit for chemotherapy and received 6 courses of bortezomib-based chemotherapy. At the latest follow-up visit in August 2016 he was doing well, his Bence-Jones lambda protein excretion decreased to 0.9 g/24 hours, serum ctreatinine remained normal.

Hematologist consult ruled out the diagnosis of multiple myeloma, and patient was referred to our clinic.

Light microscopy: sections of formalin fixed paraffin-embedded tissue were stained with H&E, Masson’s trichrome, periodic acid-Shiff and Congo red. 20 glomeruli, 4 out of them totally sclerosed (Figure 4). The rest appear enlarged, without any proliferative changes, capillary walls thin, single-contour (Figure 5). Mild interstitial fibrosis and tubular atrophy, up to 15% of parenchyma, diffuse-focal interstitial infiltration with inflammatory cells in the areas of interstitial fibrosis. Few tubules with signs of epithelial dystrophy without any casts in the tubular lumen (Figure 6). Arteries and arterioles otherwise normal. Congo red staining was negative.

Treatment and follow-up: Patient received 4 courses of bortezomib-dexamethasone chemotherapy in our unit. At the latest evaluation October 2016 she is doing well, her serum creatinine decreased from 213 to 98 µmol/L, and immunochemistry showed the decrease of IgG-kappa secretion from 24.6 to 7.1 g/L (Figures 6 and 7), Bence-Jonce protein not detected neither in serum nor in urine. Hypogammaglobulinemia persisted. 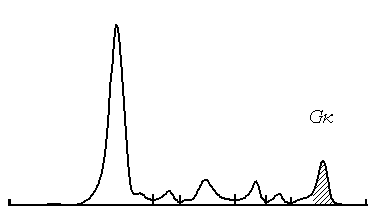 In both cases typical clinical features of MM, like ossalgia, anemia, hypercalcemia and bone lytic lesions were absent, patients presented with kidney disease, and only kidney biopsy immunopathology study gave a clue to the diagnosis. This is in agreement with the literature data, suggesting that the renal manifestations, mostly with moderate CKD and not obligatory complete FS, dominated as the clinical presentation in the majority of LCPT cases [19,24-26,29,30]. However, our cases demonstrate some peculiarities, making them rare even in the setting of LCPT, which is rare itself.

In the first case presented with unexplained new onset of severe proteinuria, routine work-up was not suggestive for myeloma: his total blood count, serum calcium, creatinine and total protein were normal, and serum electrophoresis did not show M-spike. Thus he could be suspected with non-glomerular proteinuria only because of the combination of massive proteinuria and normal serum albumin level. Therefore, kidney biopsy was performed to unmask the cause of proteinuria, and found tubular atrophy with LC lambda expression within tubular epithelial cells and very mild and unspecific focal glomerulosclerosis. That lead to the diagnosis of LCPT, and given the lack of MM signs and symptoms we considered the patient as MGRS case rather than MM. Surprisingly, his bone marrow smear showed 63.5% of plasma cells, and immunochemistry detected massive Bence-Jones protein lambda almost completely excreted in urine, which explained his normal serum protein and the absence of M-spike on standard serum electrophoresis. Severe plasma cell bone marrow infiltration, significant Bence-Jones protein secretion with biopsy-proven end-organ damage, and secondary immunodeficiency altogether fulfilled the criteria of MM. The absence of bone lytic lesions and anemia, as well as the absence of FS clinical and laboratory features in this case might be explained by the early diagnosis. The most unusual in the case 1 is the type of LC, as the association of the LCPT with lambda LC is exceptionally rare described in the literature so far.

The second case presented with 9-years history of moderate, slowly progressive renal dysfunction without significant proteinuria. Already 1.5 years before the kidney biopsy she was found with elevated total serum protein and M-spike, confirmed by detection of significant IgG kappa and mild Bence-Jones protein kappa secretion without urinary excretion of the latter. As far as she had no bone lytic lesions, anemia and hypercalcemia, and her bone marrow biopsy didn’t find plasma cell infiltration, MM diagnosis was not proved, even though she had monoclonal gammopathy, impaired kidney function and immonideficiency. She was suspected with MGRS, and kidney biopsy indeed revealed paraprotein-induced renal damage with LCPT and focal glomerulosclerosis. To differentiate MGRS and MM we ordered bone marrow iimmunohistochemistry, which provided the evidence for MM. Given FS clinical features were absent we regarded her longstanding kidney function impairment as a result of glomerulosclerosis of 20% of glomeruli secondary to the tubular damage. However, her kidney function completely recovered under hemotherapy, meaning that she had AKI on the top of her CKD, which is most unusual. Our interpretation is that the patient had a long course of smoldering myeloma with LCPT and recent evolution towards MM with exacerbation of kidney damage. The latter is suggestive for cast-nephropathy rather than for LCPT, but tubular casts were not found in her biopsy. There were no other reasons for AKI beyond LCPT, as she was not taking analgesics for many years before biopsy, didn’t receive contrast-media, antibiotics or any other nephrotoxic agents and had no signs of volume depletion.

Finally, in both cases treatment with the bortezomib-based chemotherapy regimens was successful and lead to hematologic and organ remission.

We have to thank doctors Alla Kovrigina, Eugeny Filimonov and Nuriett Khuajeva for their help in the diagnostics and treatment of our patients.

©2016 Zakharova EV. This is an open-access article distributed under the terms of the Creative Commons Attribution License, which permits unrestricted use, distribution, and reproduction in any medium, provided the original author and source are credited.