Department of Family and community Medicine, College of Medicine, University of Dammam, KSA

Small proportion of malaria infected individuals develops severe clinical phenotypes while other doesn't. Cerebral malaria (CM) is a selective phenotype of severe malaria that may clusters in certain families. The main purpose of this study was to localize the gene(s) that control(s) the susceptibility to cerebral malaria in a large inbred Sudanese family with sex members having CM.  A total of 58 microsatellite markers were typed in the family. Linkage analysis was done by two-point linkage analysis based on a recessive model under 50% of penetrance. There was no markers with a lod score ≥ 3.0 which is the criterion for significant linkage in families. However, one marker (D3S1580) on chromosome 3 with maximum lod scores of 1.40 at recombination fraction (θ at 0.00).  This may indicated that a suggestive or inexclusive linkage of cerebral malaria to chromosome 3q27-29 region.

Cerebral malaria (CM) is a complex disease which results from interaction involving both host and environmental factors, including parasite factors. Early studies of malaria therapy for neuro-syphilis suggested that there was significant inter-individuals variation even in the absence of any previous exposure [1]. Ethnic differences in malaria susceptibility supported a role for host genetics although, The Susceptibility/resistance genes and alleles vary markedly from population to another so that major resistance alleles in one region are often absent from another. Further, genetics of the parasite vary from one region to another. Whereas twin and adoptee studies provided strong evidence that host genes influenced other diseases [2]. Susceptibility/resistance for malaria is highly polygenic were host genes were shown to control blood infection levels and regulate anti-malarial immune responses thus, influence the outcome of malaria infection [3,4].

There is a strong evidence for association between both HLA class I and II alleles and resistance and susceptibility to P. falciparum malaria. The higher frequencies of HLA-B35 in Sardinia suggests it’s protective against malaria [5]. Other studies in West Africa indicated that the HLA-B53 and the HLA class II haplotype DRB1*1302-DQB1*0501 both protect against severe malaria but, do not appear to protect against mild forms of the disease [6]. Furthermore, their frequencies are significantly higher in West African population than in Caucasian or Asian populations [6].

Considering malaria phenotypes, there still no satisfactory explanation for the fact that small proportion of individuals infected with plasmodium falciparum develops CM while other are remain asymptomatic or characterized only by mild symptoms. Many host genes are involved in the control of the internal environment which the parasite faces and the major disadvantage of being parasitized should favor the survival of those host alleles that confer some protection against the parasite. Considerably, more evidences are available to indicate the important of host factors in determining the clinical presentations of malaria infection [10]. The full knowledge of these factors is important not only to understand how the disease evolves within an individual, but is also of great important to understand, from an epidemiological point of view, how it behaves in a given population.

The study was carried out in three hospitals located in cities of Wad Medani, Sinnar and Singa in central Sudan. Most of severe malarial cases in this area are admitted into one of these three hospitals. 30% of all admitted patients are due to severe malaria [10]. These cities lie along the Blue Nile; Wad medani lies about 184 kilometers south to Khartoum, the capital of Sudan, within the largest irrigated Gezira Agricultural Scheme, Sinnar lies immediately down the Sinnar dam which irrigates Gezira Agricultural Scheme while Singa lies about 120 kilometers down Damazein dam and is bypassed with many canals originated from the dam (Figure 2). Thus, the whole area is a continuous breeding focus for the malaria vector, Anopheles mosquito. This area is endemic for P.falciparum with high seasonal incidence during the rainy season from August to November. A second peak of transmission follows during January to March. Thus the data was collected during the rainy seasons and the second peaks of transmission.

The study subjects belong to 12 different tribal stocks, more than 67% of them belong to only four tribal stocks namely; the Johayna tribal stock (22.8%), Nigerian stock (17.3%), Gaalian stock (16.7%), Nuba stock (11%) (Figure 3). 123 (30%) were offsprings of consanguineous families, either first degree cousins, second degree cousins or far relationship. 100 (24.44%) were clustered in only 42 families which were clustered in only three tribal stocks. 60 (60%) were offsprings of 25 consanguineous families and 6 (6%) were clustering in only one large inbred family (Figure 1).

Ethical approval was obtained both from the Federal Ministry of Health in Khartoum and the University of Gezira Research Committees. Consent was taken from the guardians or parents of all suspected cerebral malaria children admitted to the participating hospitals. Families who gave their consents to participate in the study were followed up in frequent visits. Any participant in the study was free to leave the study at any time.

Definition of Cerebral Malaria (CM) as a clinical phenotype:

Cerebral malaria (CM) is defined as unrousable coma in a child that persisted for more than 30 minutes after any convulsions in the presence of asexual stages of P.falciparum parasite found on thick blood film for which no etiological explanation other than malaria can be attributed. This definition excludes patients suffering from post-ictal coma lasting for less than half an hour after a convulsion, as well as patients suffering from hypoglycemia who had regained consciousness immediately after receiving intravenous glucose. Also, it excludes patients with malaria parasitaemia when coma can be attributed to a concurrent disease such as meningitis, encephalitis, intoxication, etc [11].

The main purpose of this study was to localize the gene(s) that control(s) the susceptibility to cerebral malaria in a large inbred Sudanese family with sex members having CM. Family studies have proved to be the most appropriate type of studies to detect genes conferring susceptibility to disease. We selected a large consanguineous family with 6 affected children for linkage analysis (Figure 1). Using ABI PRISM 310 Genotyper, a total of 58 DNA microsatellite markers selected from ABI PRISM®Linkage Mapping Sets were typed in the large inbred family.

For linkage analysis, Two-point analysis was using FASTLINKE package that uses MLINKE program [12]. The pedigree and phenotypic data were processed by a series of preparatory programs in the analytic LINKAGE package.

Linkage analysis for the inbred family

In this study a total of 58 microsatellite markers were typed in the big inbred consanguineous family (Total members of 37). Family 13 was excluded from the analysis by the incompatibility of the mother. Linkage analysis was done by two-point linkage analysis based on a recessive model under 50% of penetrance. There was no markers with a lod score ≥ 3.0 which is the criterion for significant linkage in families proposed by Lander and Kruglyak [13].

Two-point lod scores of CM of markers in chromosome 3

Figure 2. Co-segregation of the genetic markers and CM in chromosome 3 in family.

Figure 3. Co-segregation of the genetic markers and CM in chromosome 3 in family. 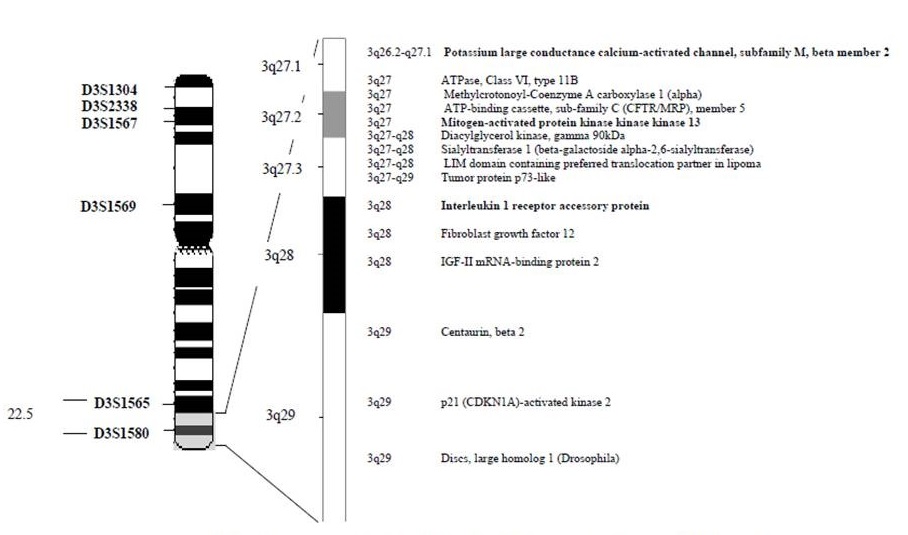 The lod scores for the different theta values obtained for the seven markers that were genotyped for 5q31-33 region (Table 2) clearly indicate that there is no linkage between this region and CM phenotype in this inbred family.

There was one marker (D3S1580) with maximum lod scores of 1.40 at recombination fraction (θ at 0.00) which is the criterion for suggestive or inexclusive linkage of complex inheritance (Table 2) [13-15]. D3S1580 marker is located in 3q27-q29 region which contains several orthologous genes (Figure 3). Two of them, are encoding molecules that play important role in signal transduction and regulation of many cellular processes and gene expression and that may be related to the pathophysiology of CM.

Interleukin-1 receptor accessory protein (IL1RAP) is a transmembrane protein that encoded in the chromosomal region 3q27-29 is a possible candidate gene that controls the susceptibility to CM. It is required for IL-1 signal transduction. The IL-1 system is composed of IL-1 alpha and IL-1 beta, two forms of precursors, two distinct receptors, two soluble fragments of the extramembranous regions of these receptors, and a natural antagonist of IL-1 receptors (IL-1 ra) which could be secreted or remain intracellular. In vitro treatment of cells with IL1 induced the formation of a complex containing IL1RAP and type I IL1 receptor (IL1RA). Interleukin-1 receptor-associated kinase (IRAK) recruits to this complex through its association with IL1RAP and overexpression of mutant IL1RAP proteins lacking the intracellular IRAK-binding domain prevented the recruitment of IRAK to the receptor complex [20].

Potassium channel, Calcium-activated large conductance subfamily, beta member 2 (KCNMB2). Calcium-activated large conductance subfamily have several roles in cellular metabolism and excitability [21]. Potassium currents play a critical role in action potential repolarization, setting of the resting membrane potential, control of neuronal firing rates, and regulation of neurotransmitter release [22]. Coexpression of KCNMA1 with KCNMB2 induced fast inactivating currents that could be increased by voltage and intracellular calcium and this coexpression lowered the sensitivity of KCNMA1 to change in the affinity of the channel for Ca(2+) [23-25]. Increase in global Ca(2+) in small cerebral blood vessel may leading to increased arterial tone in experimental animal [26]. The involvement of KCNMB2 in many ways in electrolyes balance, indue release of neurotransmitters  and arterial tone as mentioned indicated that  KCNMB2 may be involved in the control of susceptibility to CM. The KCNMB2 gene was mapped to 3q26.2-q27, in close proximity to the KCNMB3 gene [25]. The KCNMB2 weakly expressed in smooth muscle tissues and in heart, brain, and fetal lung.

These findings pointed out that; this region may play, even a minor, effect in development of cerebral malaria and further studies in this region by typing of additional markers in this big inbred family or more other families will be needed to investigate the linkage of this region with CM.

Absence of linkage between Cerebral Malaria and 5q31-33 region

Lod scores for the different theta values obtained for the seven markers that were genotyped for 5q31-33 region as shown in (Table 3 15). This indicated that no linkage was found between CM and the chromosomal region 5q31-33 in the family. contains chromosomal region 5q31-33 numerous genes encoding immunological molecules such as cytokines, growth factors, and growth-factor receptors which are involved in the control of immunity to P. falciparum blood stages [9,8,27,28]. This region was reported to be linked with control of P. falciparum parasitaemia [6-8,26]. Moreover, the importance of this region in immune regulation is highlighted by its linkage to plasma immunoglobulin E (IgE) levels [30,31]. Comparison of the levels of total IgE or IgE anti-malaria antibodies in patients with uncomplicated malaria with those in patients with the severe form of the disease [32] indicate that these levels are significantly higher in the cases with severe disease [33].

The absence of linkage of this region with CM indicates that anti-disease immunity and anti-infection immunity may be under control by distinct and different genetic factors. In addition P. falciparum parasitaemia is not always correlated with the severity of the disease [34]. Furthermore, population differences in both the host and the parasite may contribute to the controversy of these results.

© 2016 Mergani A. This is an open-access article distributed under the terms of the Creative Commons Attribution License, which permits unrestricted use, distribution, and reproduction in any medium, provided the original author and source are credited.

Figure 2. Co-segregation of the genetic markers and CM in chromosome 3 in family.