Sudden cardiac death: the dark side of exercise!

The authors report the case of an apparently healthy 57-year-old male who died sudden and unexpectedly while running on a treadmill in a gymnasium. Postmortem examination revealed an “Ischæmic Cardiopathy”. Attention is drawn to the risk of exercise (especially if strenuous and non-regular) triggering Sudden Cardiac Death in adults, namely middle-aged or elderly, with or without known underlying pathology.

Sudden Cardiac Death (SCD) is defined as “a natural, unexpected fatal event, with a cardiac underlying cause, occurring instantly or within 1h from the onset of symptoms in an apparently healthy subject or whose disease was not so severe as to predict an abrupt outcome” [1]. When not witnessed, it is assumed sudden if “the deceased was in good health 24h before death” [1]. Sudden Adult Death is the one occurring in persons aged ≥35 years [2] and Sudden Young Adult Death corresponds to the one happening in persons aged ≥18 to <35 years [3]. In non-selected populations, the incidence of Sudden Cardiac Death ranges 0.001-0.002% per year [4]. In athletes, SCD is rare (1: 50,000-100,000 annually), yet it is esteemed to occur 2 to 4 times more often than in non-athletes [4]; defining Athlete as “who participates in individual or collective sports (any age) as well as training programme of systematic and regular competitions” [4]. Variations in athletes’ SCD epidemiology and cause exist due to age, gender, and populational affinity of subgroups, due to individuals’ physiological characteristics or eventual known or unknown co-morbidities, as well as due to type and schedule of exercise / training / sports modality [5]. The authors report and discuss a case where exercise triggered unexpected sudden death of cardiac aetiology in an apparently healthy middle-aged male.

A 57-year-old male, with no relevant personal or familial pathologic antecedents and no addiction habits, died unexpectedly while running on a ‘gymnasium treadmill’. Unsuccessful resuscitation manœuvers were performed for 20 minutes. Afterwards, witnesses told that he had been practicing an excessive physical activity for about 1 hour and his wife reported that, for 2 days, he had been exercising far beyond the usual. A complete postmortem examination was performed.

Body of a middle-aged male with normal height and weight for age and gender. External Habitus examination showed no traumatic or other significant lesions. Internal Habitus examination revealed generalized and severe vascular congestion of tissues and organs. The heart presented increased weight (450g), normal shape, no congenital malformations and, in section, macroscopic white and firm myocardial foci/areas and white-yellowish eccentric atherosclerotic lesions, occluding 50-75% of coronary arteries lumen. Organ samples were procured for microscopic examination. They were fixed in 10% formalin and embedded in paraffin. Microtome sections were stained with haematoxylin/eosin (H/E). Additional special stains [Masson Trichrome (MT), Elastic van Gieson (EvG)] were performed on the heart samples, for better interpretation. Photography of the histological slides was done using LEICA DM1000 LED microscope and image acquisition system LEICA ICC50 HD camera plus LAS EZ v2.0.0 for Windows software. Histopathological evaluation confirmed the generalized vascular congestion of all the organs and showed myocardial fibres hypertrophy, replacement fibrous scars (Figures 1 and 2) and thick walled intra-myocardial arteries at the edge of the scars (Figures 3). It also showed the atherosclerotic plaques to be type IV lesion of “American Heart Association” (A.H.A.) Classification [6,7] (Figures 4).  Toxicological tests in the blood, from the heart and femoral vein, were negative for alcohol, drugs and medication. The final diagnosis was that of a “natural cause of death, sudden and unexpected, due to Ischæmic Cardiopathy”. 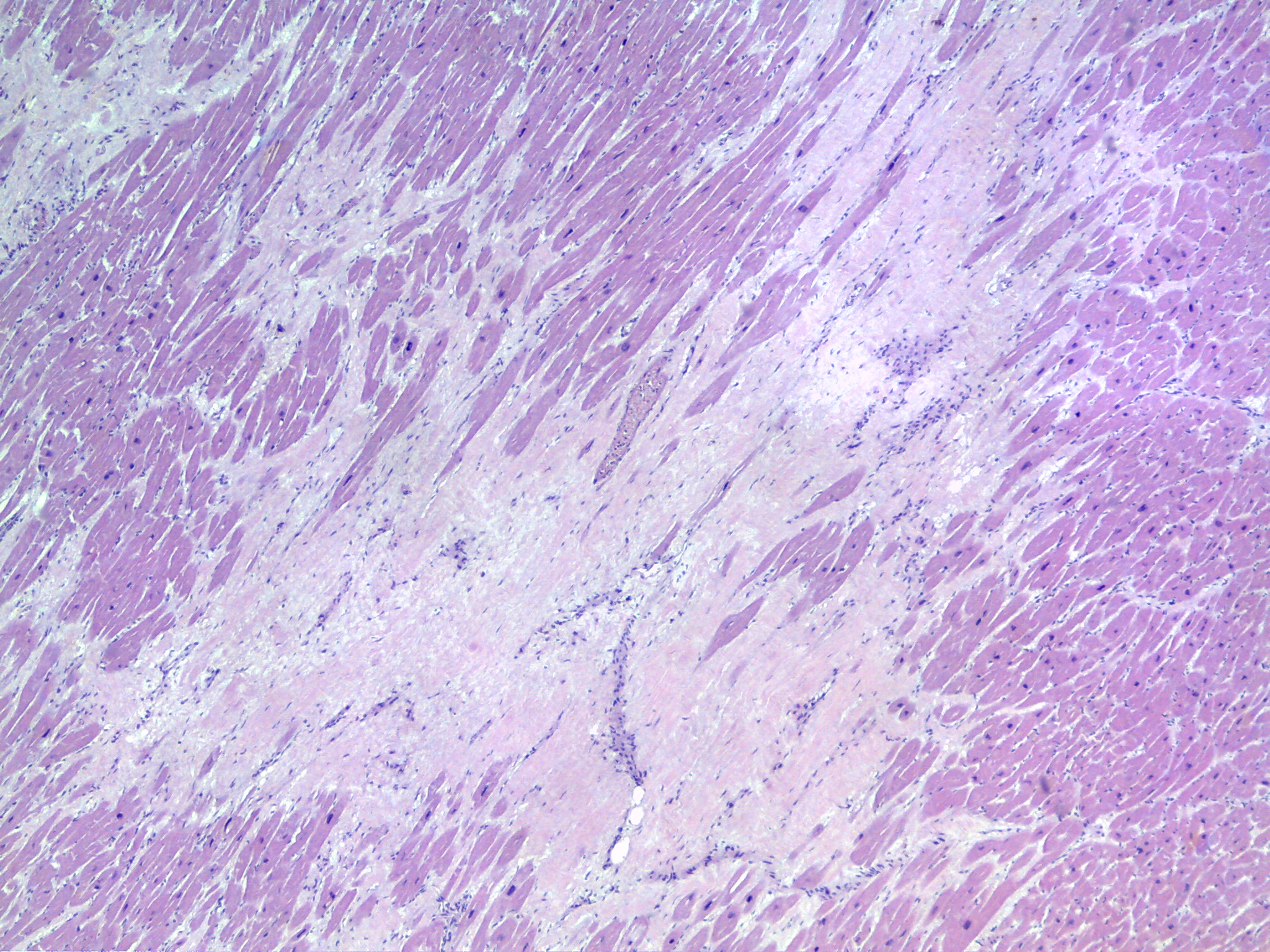 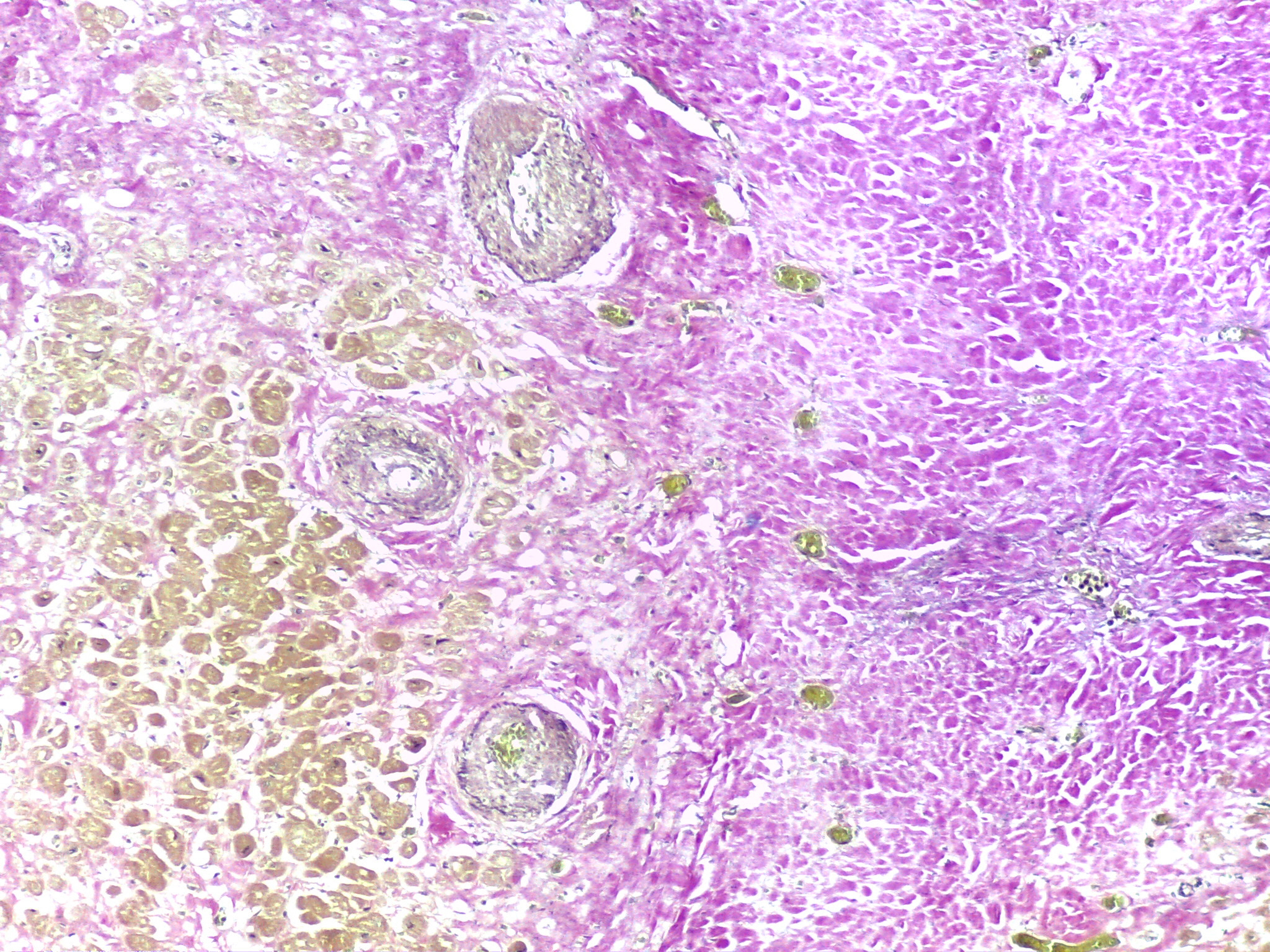 Figure 3. Area with thicken-walled arteries at the interface between the fibrous scar (right) and the adjacent myocardium (left) [EvG x100] (source: INMLCF, I.P.). 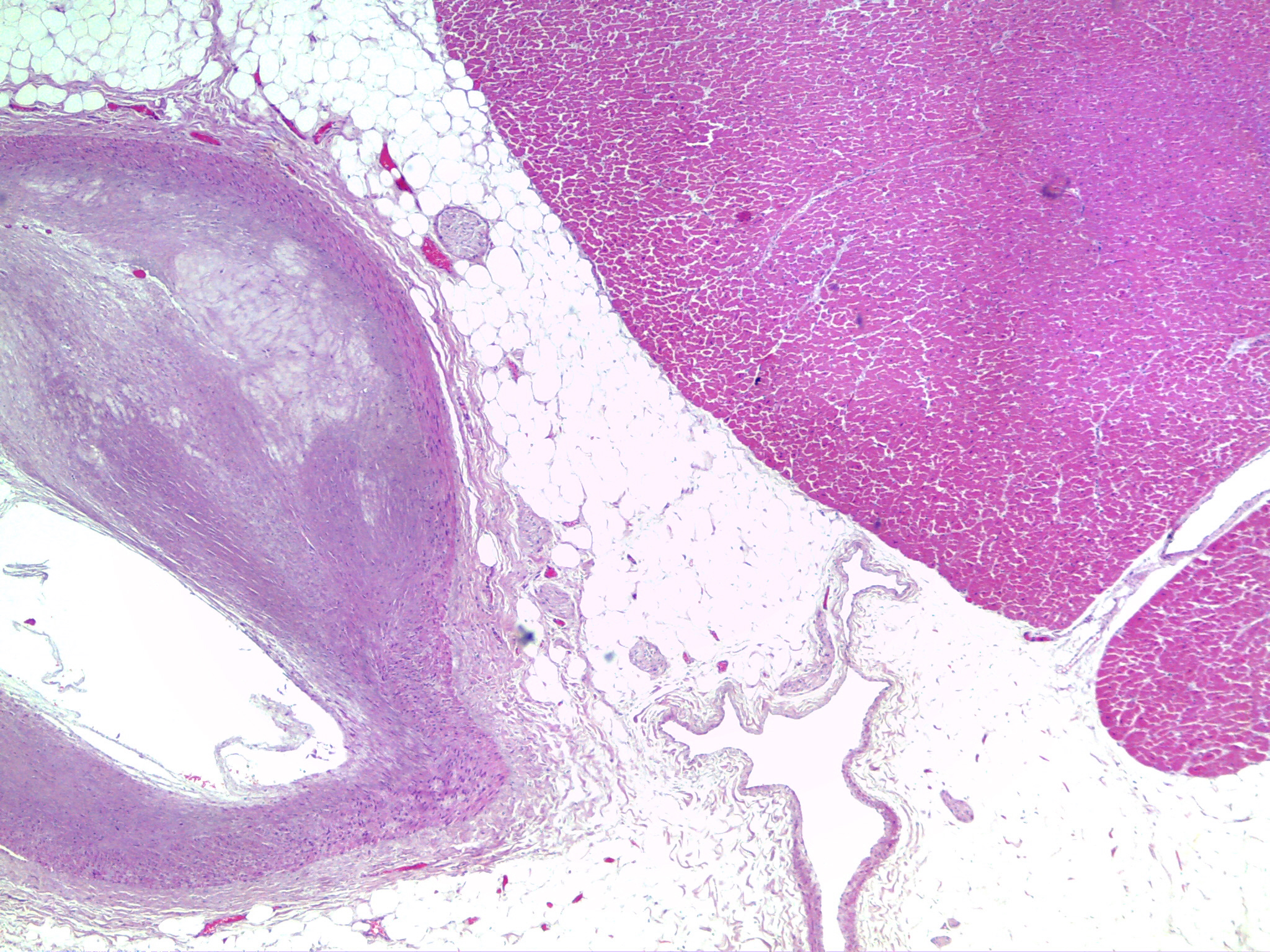 This case belongs to a series of 1141 autopsies performed during one year (2011) in a Medico-Legal Institution that serves a territorial area of 29.206 Km2 with a population of 2.595.540 inhabitants.

Physical Activity, either due to profession, to hobbies or to sports practice is beneficial for health, leading to morbidity (cardiovascular, respiratory, endocrine, neurological, musculoskeletal, oncological, etc.) reduction and, thus, mortality decreases [8]. A classical example is the study performed by Morris et al., that showed 50% less coronary artery disease in physically active professionals [9]. This is very important when we realize that cardiac arrest and sudden death of adults, more frequent in males and increasing with age (middle-age, elderly) [2], are mostly due to cardiovascular pathology, particularly Atherosclerotic (Ischemic) Coronary Heart Disease [10], which ranges from 50,1% to 60% in the western world including Portugal [2-11,12]. Yet, we must keep in mind the “sports (exercise) paradox”, meaning that ‘vigorous, acute and transient’ physical activity may, on the contrary, be responsible for Sudden Cardiac Death [13], as happened to the victim reported. In fact, strenuous when compared to moderate-intensity exercise was related to a 5 to 7 times higher possibility of unexpected death [14]. Ninety per cent of SCD in sport occur in males and >90% in recreational athletes [8], matching our victim’s pattern. The major cause underlying Sudden Cardiac Death in older athletes (>35years) is Atherosclerotic (Ischæmic) Coronary Heart Disease – acute or chronic – and its complications (80%) [4, 5]; growing from percentages around 43% in the older young adults [3,5]. In the present case, the mechanisms proposed for the exitus letalis are: 1) “decreased blood flow” due to atherosclerotic reduced lumen of the epicardial coronary arteries and reduced lumen of the aging and/or chronic ischæmia-induced thicken-walled intra-myocardial arteries; which in a setting of physical effort would be insufficient for the myocardial work-load needs, leading to ischemia and/or arrhythmia. 2) “Arrhythmogenic foci” corresponding to the replacement fibrous scars, which interfere with the normal electric cardiac conduction. 3) “Impaired Cardiac Function” due to myocytes hypertrophy and myocardial replacement fibrous scars. Now-a-days, cardiovascular screening of young, especially competitive, athletes is viewed as a medical duty; yet, a pre-participation health evaluation, an adequate choice of sports modality and/or exercise intensity, followed by regular medical re-examination of older practitioners is far from sufficient, whether the individual is apparently healthy or presents a known – but stable – cardiovascular disease [14-17]. Many practitioners engage exercise programs without searching for medical screening or counselling.

In conclusion, the authors draw attention to the following important issues:

The authors declare no financial interests or other conflict of interest in relation to the work submitted.

© 2016 Gouveia RHD. This is an open-access article distributed under the terms of the Creative Commons Attribution License, which permits unrestricted use, distribution, and reproduction in any medium, provided the original author and source are credited.

Figure 3. Area with thicken-walled arteries at the interface between the fibrous scar (right) and the adjacent myocardium (left) [EvG x100] (source: INMLCF, I.P.).