Overweight and obesity are the fifth leading cause for global deaths. At least 2.8 million adults die each year as a result of being overweight or obese. In addition to adult obesity, child obesity is a major problem in many developing countries. Overweight and obesity are the major risk factors for diabetes type ii, heart disease, stroke and some types of cancers.  Like many countries adult and child obesity is on the rise in Saudi Arabia. In this study we decided to study the percentage of obese people among school aged adolescent children and the adult population of hail region of Saudi Arabia. Percentage of overweight and obese people is rising in Saudi Arabia. BMI was measured for all of our subjects additionally questions were asked regarding their family history such as how often they exercise, watch TV, how often they eat red meat, prevalence of colon cancer (due to inadequate vegetable consumption), preference for sweets, etc. Our results show that 48% of male children were obese or overweight, 46% normal and 6% underweight. Among female children 20% were overweight and 13% were found to be obese. Obesity rates were shockingly high (73% obese) among adult Saudi population.  We found 58.4 % adults to be obese and 15.4% were severely obese.  9.9% adults were found to be overweight.

Obesity is growing rapidly in many countries. According to the World Health Organization (WHO) in 2014, there were more than 1.9 billion adult overweight people in the world (WHO 2015 update). WHO further adds that in 2014, 39% of adults aged above 18 were overweight and 13% were obese. Prevalence of obesity has increased in children and the adolescent population of developing countries (23.8% of boys and 22.6% of girls) [1]. Similarly prevalence of overweight and obesity also increased among children and adolescent population of developing countries from 8/1% to 12.9% in boys and from 8.4% to 13.4% in girls [1].

Like many developing countries obesity is growing at alarming rates in Saudi Arabia [2-4]. For many years USA was considered the fattest nation however according to united nation’s latest list on obesity, in 2015 Mexico has surpassed USA in world obesity ranking (WHO world fact sheet 2015). According to 2015 CIA world fact book Saudi Arabia ranks 17 with average adult obesity prevalence rate of 33%. According to Saudi health officials obesity is one of the leading causes of preventable deaths in Saudi Arabia. Globally about 2.8 million people die per year due to overweight or obesity related illnesses (WHO, Global health observatory data).

Obesity (high BMI) is considered a major risk factor for many serious illnesses and death all over the world. If not controlled, it can lead to many health problems such as hypertension, hyper-lipidemia, heart disease, sleep apnea, osteoarthritis and diabetes.  However according to other studies high abdominal circumference is more closely associated than BMI as a risk factor for type 2 diabetes [5].

With the global increase in life expectancy of individuals in all age groups, obesity can now lead to many years of unwanted disability and dependence on other family members and friends for daily activities. Hence, the increased cost of obesity treatment and its consequences will put a major burden on the resources of family members and the respective Governments.

Since data is not available or is scarcely available we decided to study the obesity in adults as well as in male and female high school children of Hail region in Saudi Arabia. Our subjects were selected randomly. Since data on obesity is hard to come by we decided to compare the adult obesity rates with the child obesity rates in Hail region of Saudi Arabia. We decided to compare obesity rates between young adults (under 18) with the adult population. Obesity is defined as an adult with the body mass index (BMI) of 30.00 or over. The BMI of our subjects was calculated by recording the subject’s weight (in kilograms) and dividing this number by subjects squared height in meters.

Since obesity does not discriminate between genders or socioeconomic status of people,  in this study we followed up a cohort of 101 male (mean BMI 33.7) and 50 female adults (mean BMI 36.4), 102 male children age range 13-18 and 119 female children age range 10-18 years. A questionnaire was distributed among randomly selected adult male and female subjects (n=151) and local area high school students (n=181, 102 males and 119 females). The data was also collected on smoking habits, weight and height (to calculate BMI), history of diabetes or cancer in the family, daily physical activity, hours spent watching television or online (chatting and texting) and the sleeping habits of students. Statistical analysis was done (using SPSS software) on the data collected and expressed in the form of pie charts and bar graphs (histograms) using Excel Microsoft window program. 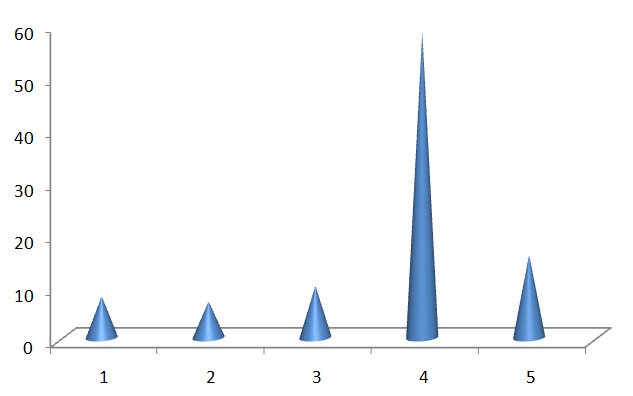 Next we wanted to survey area male high schools for prevalence of obesity. We randomly selected 102 male children. The age range of our subjects was between 13-18 years. 19% of the male children were overweight and 29% were found to be obese with their BMI at 30 or above. 46% of our subjects had a BMI in normal range (18-24). We also found 6% of the children to be under weight (BMI below 18) (Figure 3 and 5). In summary, like adult population male school children also had a very high prevalence of obesity. Altogether 48% of male school children were either overweight or obese (Figure 3).

Next we surveyed area female high schools for prevalence of obesity. We randomly selected 119 female children. The age range of our subjects was between 10-18 years and BMI range was from 12.6-39.2.  33.6% of our female school children of Hail region were found to be overweight or obese.

20.2% of the female children were overweight and 13.4% were found to be obese with their BMI at 30 or above. More than half (52.1%) of our female subjects had a BMI in normal range (18-24). We also found 6% of the children to be under weight (BMI below 18) (Figures 3 and 5). In summary, like adult population female school children also had a very high prevalence of obesity. Altogether 34% of female school children were either overweight or obese (Figure 4). 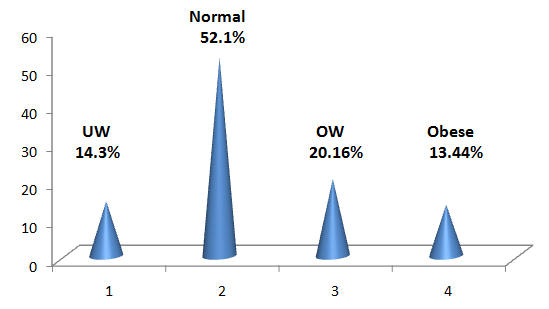 Obesity has been a global problem for many decades. According to some studies sedentary life styles and increased availability of low-cost high energy foods (Figure 1 a, b, c) plays an important role in rising rates of obesity [6].

In 2014, 39% adults (18 and above) were overweight and 13% of the world’s adult population (11% men and 15% women) were obese [7]. According to international standards a person with BMI of 25 or greater is considered an overweight while the BMI of 30 or above is considered an obese. BMI provides a measure of overweight and obesity among populations. Overweight and obesity can be defined as abnormal or excessive fat accumulation [7] that may impair an individual’s health. If not controlled it may lead to various health complications such as diabetes, cardiovascular disease and many types of cancers.

According to recent studies [1] prevalence of overweight and obesity has increased in children and adolescents in developing countries. According to this study in developing countries, 23.8% of boys and 22.6% of girls were overweight or obese in 2013 [1]. In comparison to child obesity in adult population prevalence of obesity in men in Tonga and woman in Qatar, Libya and Tonga exceeded 50% [1].

Like many neighboring countries, obesity is also growing rapidly in Saudi Arabia [8]. In this study we decided to study obesity in every age group and gender in Hail region of Saudi Arabia. First we looked at prevalence of obesity in adult Saudi population. We found 9.9% of Hail adult population to be overweight, and 58.4% of the adults were obese. In addition 15.84% subjects were found to be severely obese. Therefore, our results suggest that more than 73% of our randomly selected adult population of Hail region were either overweight or obese. As compared to global adult obesity prevalence of 13% we found shockingly high rates of obesity (fourfold higher) prevalence (58.4%) in Hail population.

Like many developing countries including Saudi Arabia, has adopted a Western lifestyle, which is characterized by daily consumption of very high calorie food intake (burgers and deep fried food and high sugar drinks) (Figure 1) and too little or no time for physical activity to burn those calories. Additionally, too much dependence on digital media such as watching television, browsing the internet and excessive use of smart phones and computers also contributes towards obesity problems. As a result obesity is becoming the leading cause of death in many countries including Saudi Arabia.

Saudi Arabia was ranked 17th in the world in adult obesity prevalence with 33% of its adult population was categorized as obese (According to CIA world fact book (2015), however our results differ significantly from this report.

Obesity is growing in Saudi Arabia in every age group and gender at an alarming rate. This rapid rise of obesity is a cause for concern for Saudi officials. Unless drastic steps are taken this problem will be a great financial burden on respective government. Serious steps should be taken to control rising obesity in every age group. Need to raise awareness in general population and in schools about health complications associated with obesity and the importance of daily exercise. Steps must be taken to regulate the type of foods that is offered to school children. More nutritionists should be hired in schools to raise awareness about obesity.

©2015 Farshori MPQ. This is an open-access article distributed under the terms of the Creative Commons Attribution License, which permits unrestricted use, distribution, and reproduction in any medium, provided the original author and source are credited.