In the past this tumours were more frequent in woman in a proportion of 2:1 affecting preferably patients over 50 years old. In the last 30 years the incidence has increased up to 96% in males and 36% in females. This increase has been more frequent in men that have sex with men, with numbers near the ones for cervical cancer before cervical cytology was stablished as screening method [3-6].

Recently research about A.I.N., that share many characteristics with Intraepithelial cervical neoplasia (I.C.N), as a pre-inveasive stage of A. E.C., as I.N.C. with cervical cancer. There exist a few registries in the world about the A.I.N., and less in México [7,10].

This study was a case series descriptive study, prospective and unicentric. This work was developed from March to July 2014 in the General Regional Hospital No. 1. “Carlos MacGregor Sánchez Navarro”, a second level of attention hospital in México City. The study was registry and authorized by the ethics commite with clinical registry number F-2014-3609-13.

From March to July 2014 patients included in the CLISIDA program, a program to follow up patients with H.I.V. infection, were refered to the colon and rectum consultation for an evaluation. Paients fulfilling the inclusion criteria and after explaining the objectives of the study, benefits and risks, patients were asked to sign an informed consent.

Data was collected in an Excel 2007 data base and analised with descriptive statistics including medium, average, percentages and frequencies. Comparative test was not performed by the study design.

A total of 113 patients fulfill the inclusion criteria and were included in the mentioned time period. The total of this were men, with average age of 43 years (24-74 years). H.i.v. Diagnosis were reviewed with file registry and for this data the average time of disease evolution was 9.7 years (a month to 30 years) (Table 1).

About sexual behavior and sexual habits, the average of sexual partners was 50.1 for patient (1 to 1,200). The use of condom was reered in all sexual intercourse with men in 76% of times, 24% refer to use it in some ocations and none refer not to use it (Table 1).

Table 3: H.I.V. stage at the present time of study. 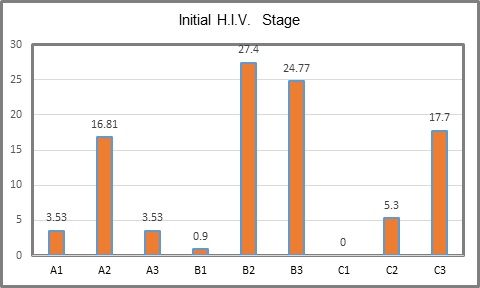 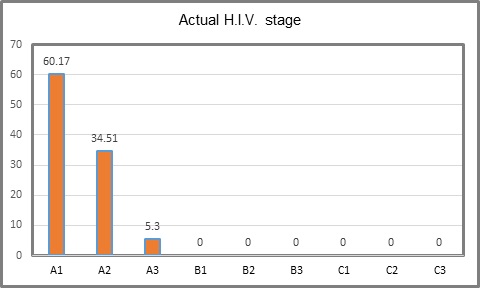 Figure 2: H.I.V. stage at the present time of study.

Our study was developed in a second level of attention hospital “Dr. Carlos MacGregor Sánchez Navarro” from the Mexican Institute of Social Security, a hospital that have the service of a program called CLISIDA, which offer attention to 1,800 patients with H.I.V. and A.I.D.S., considering it as a national reference center. It is important to mention that there is no clinical guidelines or protocols about the screening of H.P.V. or precancerous lessions in seropositive patients. As refered in the international guidelins published by England, they recommend the realization of clinical guidelines and protocols according to each hospital needs specially in reference centers [12].

In 2012 a review and systematic analysis was published in Lancer about Global burden of cancers attributable to infections in 2008, considereing many infectous agents as carcinogenics, and based in GLOBOCAN 2088 statistics, it was reported that from the 12.7 millions of new cancer cases that year, 16.1% could be attributable to infectous agents, meaning around 2 millions of new cancer cases [18].

Other important point is the difference in stage presentation between our patients and the ones presented by the mentioned study in Nationa Medical Center La Raza, with a prevalence of H.I.V. stage C3 in 65.2%, and 60.17% of A1 stage in our center. We consider that this is secondary to the good pharmacologic control and education of patients in our group center CLISIDA, both diminishing infection rates.

Actual viral charge is 930.52 copies/ml average in our population, and in 80.53% of patients it is undetectable, with a range from 0 to 47,600 copies/ml, reflecting viral suppression and adequate antiretroviral therapy as mentioned by 2008 Europe guidelines [1,5]. None international study analize the H.I.V. clinical stage as a risk factor to H.P.V. infection, and for this reason we suggest this analisis in future protocols.

©2016 Carreño Lomeli MA. This is an open-access article distributed under the terms of the Creative Commons Attribution License, which permits unrestricted use, distribution, and reproduction in any medium, provided the original author and source are credited.

Table 3: H.I.V. stage at the present time of study.

Figure 2: H.I.V. stage at the present time of study.