Onychomadesis is asymptomatic separation of the nail plate from the nail matrix, beginning at its proximal end, possiblydue to atemporary nail matrix arrest. Here we describe a 13-month-old girl with onychomadesis on her hands, following Gianotti-Crosti syndrome.

Beau’s lines and onychomadesis fall along a spectrum of nail dystrophies that occur secondary to nail matrix arrest (NMA).Beau’s lines are transverse, band-like depressions extending from one lateral edge of the nail to the other[1].  Onychomadesis is considered an extreme form of Beau’s line with subsequent separation of theproximal nail plate from the nail bed[2].

Here we describe a 13-month-old girl with onychomadesis on her hands, following Gianotti-Crosti syndrome.

A13-month-old girl was referred for evaluation of a rash that had been present for five days. Past history revealed an episode of watery diarrhea and fever, treated symptomatically,two weeks before the onset of the skin lesions. The rash had begun on the cheeks and upper extremities and spread to affectthelower extremities.

Examination revealed an otherwise healthy, active child. Multiple erythematous papules were note on her face, and onboth upper and lower extremities(Figure 1).Several papulovesicleswere also present on her gluteal region (Figure 2). There were no lesions on thepalms and soles. No hepatosplenomegaly or lymphadenopathy was detected. 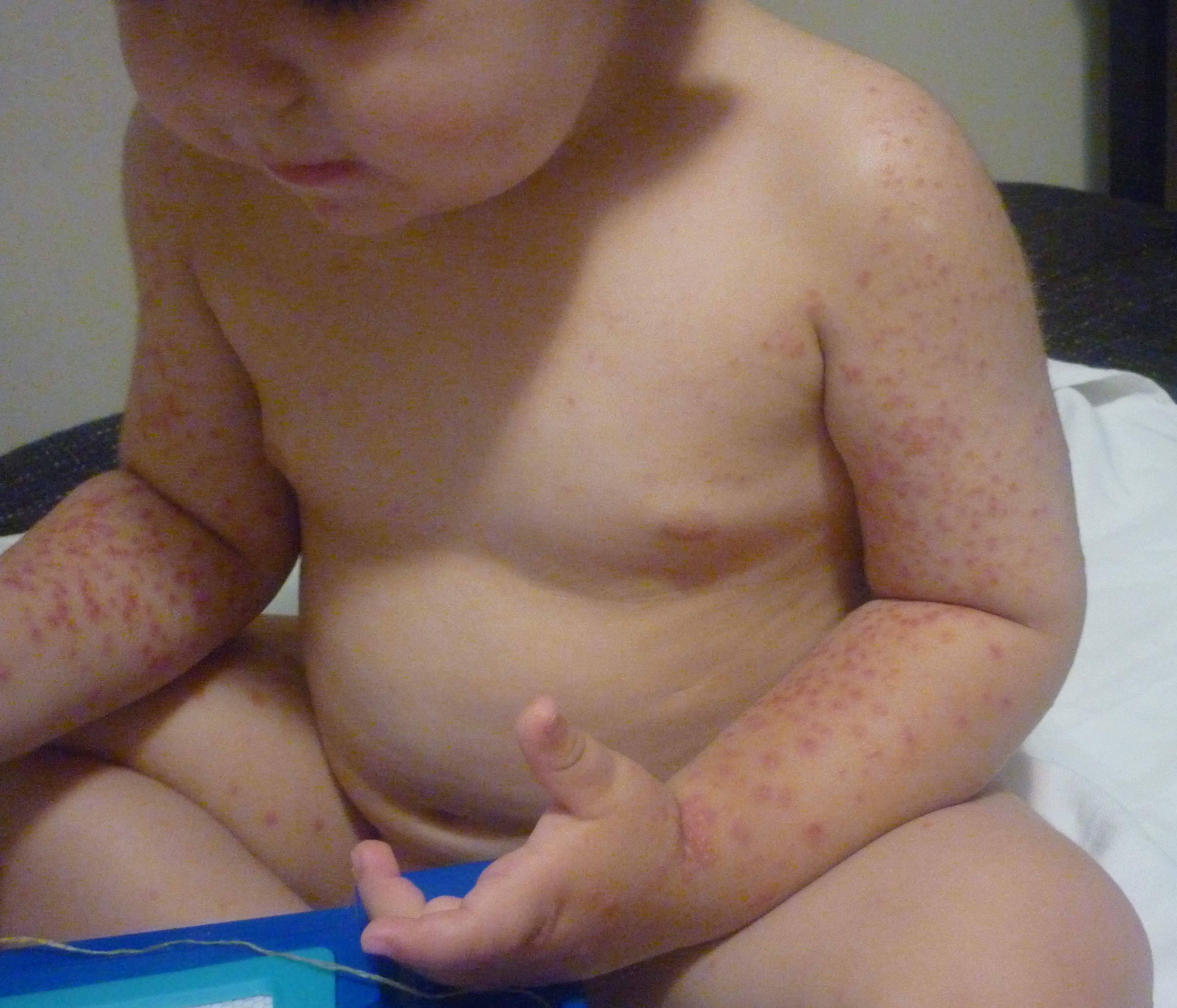 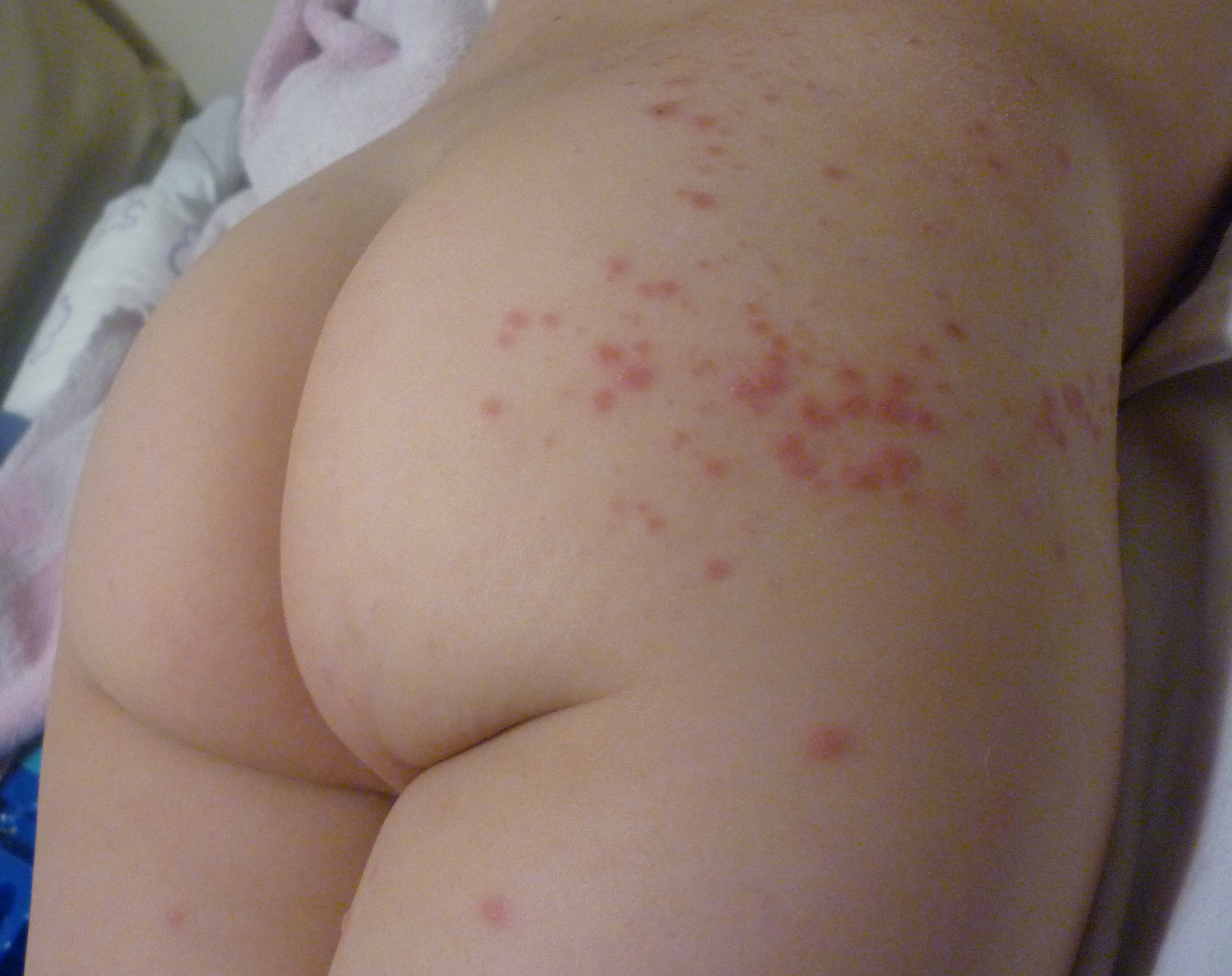 A diagnosis of Gianotti-Crosti syndrome was made and acausative role of a gastrointestinal viral infection was suggested. Routine hematology and serum chemistry revealed no abnormalities. Serology tests for hepatitis A, B, and C virus were negative.  We did not performadditional bacteriological and virological tests. A complete regression of theskin lesions was seen after 6 weeks, during the regression of the skin rush, changes on her fingernails were noted.

Upon examination, painless, palpable grooveswere noted on thenails, onthemiddle and indexfingerof theright hand (Figure 3), as well as thethumb, middle and ring finger of her left hand (Figure 4). The grooves were 2 to 3mm in width, and wereat a similar distance from the proximal nail fold. There were no signs of periungual inflammation. Potassium hydroxide preparationwas negative. A diagnosis of onychomadesisfollowing GCSwas made. During the follow up, two fingernails developed complete nail shedding (Figure 5). A spontaneous complete healing of the nailswas observed after 2 months.

Figure 3. Beau's lines on the middle and index finger of the right hand.

Figure 4. Beau’s lines on the index finger, thumb and middle finger on the left hand.

Gianotti-Crosti syndrome (GCS), or popular acrodermatitis of childhood is a distinctive self-limiting rashwith acharacteristic acrally distributed papulovesicular eruption. GCS is considered a cutaneous response to various immunologic triggers. The original cases, described by Gianotti in 1955, were associated with hepatitis B virus infection, but other viruses such as EBV, CMV, coxsackievirus, hepatitis A virus, parainfluenza virus, respiratory syncytial virus, rotavirus, mumps, parvovirus and molluscumcontagiosum have been reported to be associated with GCS[3]. Bacterial infections, as well as immunizations[4], havealso beenimplied in theetiology of this condition.

Beau’s lines and onychomadesis show strong associations with viral infections in childhood.   Hand, foot and mouth disease (HFMD), followed by onychomadesis was first reported in 2000 in 5 children in Chicago[5].Isolated onychomadesis cases following HFMD have been described in the France [6], Spain [7] and also Finland [8]. More recently, varicella related cases have been observed [9,10].

It is unclear whether the NMA resulted froman inflammation spreading from skin lesions around thenails, or whetheraviral infection had severe systemic impact on the general condition of the children.The detection of Coxackie virus in the shedded nail particle, following HFMD, suggests that the viral replication itself may directly damage the nail matrix[11].

In thepresent case, acute diarrhea and fever preceded GCS for 2 weeks, and onychomadesis for 5 weeks. Both can be consideredas late manifestations of aviral gastrointestinal infection.

Although there was a suspicion of viral etiology of GCS and onychomadesis, we did not perform serological tests because the patient would not have anyadditional benefit from them.Nevertheless, an etiologic diagnosis may only be reached in less than half of the patients, even using a large range of microbiological investigations[12,13].

GCS and onychomadesis remains an enigmatic reaction to different agents, and both conditions can be regarded as arare and late complication of a viral infection in young children.

©2016Katerina D. This is an open-access article distributed under the terms of the Creative Commons Attribution License, which permits unrestricted use, distribution, and reproduction in any medium, provided the original author and source are credited.

Figure 3. Beau's lines on the middle and index finger of the right hand.

Figure 4. Beau’s lines on the index finger, thumb and middle finger on the left hand.