Seizure is a non-specific symptom of an underlying physiologic abnormality. It can be due to abnormal brain activity, as in epilepsy, or other causes. Here we describe a case of a man presenting with new onset seizure, with the underlying cause discovered at autopsy to be advanced cardiovascular disease. This case highlights a clinically-significant etiology of new onset seizure in adults, and draws attention for its consideration in the evaluation of a patient presenting with unexplained seizure.

Seizure is a physical convulsion in response to an underlying physiologic abnormality. The classic etiology of seizures is the epileptic seizure, caused by abnormal excitation patterns in the brain. Non-epileptic seizures can be caused by a number of abnormalities. These include a number of metabolic abnormalities, endocrine dysfunction, cerebral anoxia, trauma and drug toxicity or withdrawal. Upon diagnosis, age is critical to identifying the cause of seizure. In children, the probability of an epileptic etiology of seizure is of greater concern. For adults, consideration is first to rule-out the non-epileptic causes because the initial presentation of epilepsy typically occurs during childhood. In the vast majority of cases, a new onset seizure in an adult that does not persist into status epilepticus is not an emergent problem [1]. Herein, we present a case of a new-onset seizure as an initial symptom of advanced cardiovascular disease.

A 47-year-old African-American man with a history of untreated hypertension and a pack per day smoking history presented to the emergency department (ED) after being found convulsing by his family. He reported feeling light-headed and short of breath prior to passing out. While unconscious, the patient was observed by family to convulse for about five minutes and he was gasping for breath. Complete blood count and complete metabolic panel were unremarkable aside from a blood glucose of 173 mg/dL. On physical exam, he had a blood pressure of 141/85 mm Hg and mild congestion. Chest x-ray was normal and a head computer axial tomography (CT) scan showed mild maxillary and ethmoid sinusitis. The patient was discharged after three hours of observation without seizure activity with referrals for further workup with a neurologist. Less than two hours after discharge, Emergency Medical Services to a second seizure call. They arrived on the scene to find the patient in ventricular fibrillation that converted to ventricular tachycardia and then pulseless electrical activity through the course of the Advanced Cardiac Life Support protocol. Resuscitation continued through transport to the hospital where a chest x-ray showed slight enlargement of the heart. Resuscitation attempts were discontinued after over an hour and the patient was pronounced dead. The case was referred to the coroner.

At autopsy, no underlying brain abnormality was found, grossly or microscopically. Moderate to severe atherosclerosis was apparent in the coronary arteries (Figure 1) and aorta, with focal mild atherosclerosis affecting the cerebral arteries (Figure 2). Cardiomegaly was also noted. Microscopic examination revealed coronary artery atherosclerosis (Figure 3) along with myocyte hypertrophy, interstitial fibrosis and myxoid change of the mitral valve. Postmortem toxicology testing was negative. The cause of death was hypertensive and atherosclerotic cardiovascular disease with the seizure activity interpreted as likely due to cardiac arrhythmia. 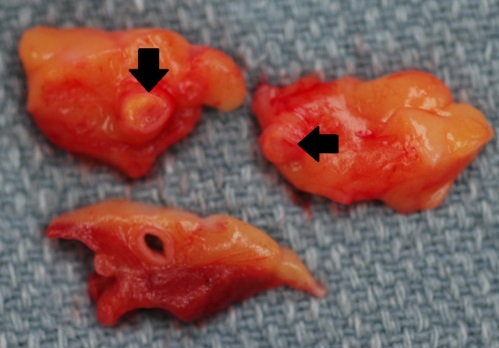 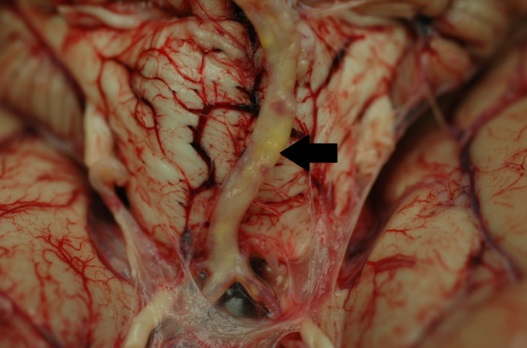 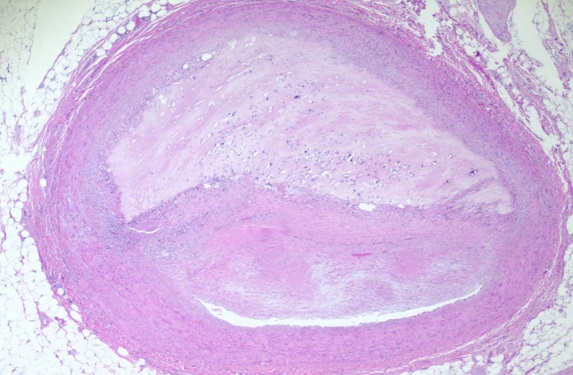 Figure 3. Microscopic section of coronary artery atherosclerosis. Note the presence of a thin, slit-like lumen evident at the lower portion of the image. The plaque has classic features, including a “necrotic” center with cholesterol clefts and microcalcifications, and a fibrous cap, separating the necrotic center from the lumen (Hematoxylin & Eosin stain; 20X original magnification).

The patient initially presented with a seizure that was most likely related to underlying cardiovascular disease. Though not a commonly recognized presentation of cardiovascular disease, it is a phenomenon recognized commonly within the forensic pathology community. A number of case reports in the literature document seizure activity due to cardiac arrhythmia. One case documented a 78-year-old man who had several bouts of seizure with unknown etiology. The work-up was negative until physicians performed a simultaneously electroencephalogram (EEG) and electrocardiogram (ECG) and saw that during a seizure, the patient experienced asystole for about 30 seconds before returning to sinus rhythm and regaining consciousness [2]. Another group reported four patients who were all diagnosed with epilepsy. When simultaneous EEG and ECG was performed, it was demonstrated that the seizures coincided directly with cardiogenic syncope due to arrhythmia [3]. Another case demonstrated seizure in a man immediately following the development of atrioventricular block [4]. These serve to demonstrate that, although this is not commonly recognized, it is certainly a phenomenon that exists.

Evaluation of seizure in the ED for patients who are not in status epilepticus, involves the performance of basic laboratory studies for evaluation of metabolic disturbances and potentially performing a head CT to evaluate for mass lesions. In a large multi-center study looking at patients with a chief complaint of seizure, 83% received basic laboratory testing and 35% received CT scans [5]. The study did not report anyone receiving evaluation for potential cardiac causes of seizure. Given that the phenomenon reported here is relatively uncommon, it probably does not warrant strong consideration in every patient presenting with a first-time seizure. However, the patient presented in this report had significant risk factors for atherosclerotic heart disease, including untreated hypertension, hyperglycemia, a pack-per-day smoking history, and African-American ethnicity. In patients, such as this man, the consideration of cardiovascular disease and associated arrhythmia as the underlying cause of the seizure should be considered. Previous authors reporting on this topic have suggested that the presence of atypical symptoms prior to seizure activity could suggest a cardiogenic cause of seizure [6]. Such atypical symptoms include palpitations and light-headedness, and nausea. Other work found that as many as 40% of patients with seizures not clearly due to epilepsy, or resistant to adequate anti-epileptic therapy, had an identifiable cardiovascular etiology [7]. Their evaluation included tilt-table testing and carotid massage with continuous EEG and ECG monitoring. This work-up is clearly not feasible in an ED setting or even in all patients with seizure activity. However, in atypical seizure patients with cardiovascular risk factors such a work-up should be considered because failure to recognize the important association between underlying cardiovascular disease and seizure activity can result in death, as in the case presented.

In this particular case, the presumption is that the seizure activity was related to an underlying cardiac arrhythmia, which was secondary to hypertensive and atherosclerotic heart disease. In addition to hypertension and atherosclerosis, there are a number of other cardiac conditions that can cause cardiac arrhythmia. Any type of ischemic cardiac event can cause an arrhythmic episode. Diseases causing cardiac enlargement such as hypertension, valve disease, dilated cardiomyopathy or hypertrophic cardiomyopathy can also trigger arrhythmias. All of these as well as congenital arrhythmic processes have the potential to present with seizure activity.

Seizure activity is a concerning symptom in any patient in that it can be indicative of underlying neurologic or metabolic abnormalities. Typically, evaluation of new-onset seizure in the ED involves observation, evaluation of metabolic disturbance, and potentially CT imaging of the head. Forensic pathologists are aware of numerous cases of sudden cardiac death preceded by “seizure activity”. Clinicians should be aware that seizure-activity may be the first indication of an underlying arrhythmogenic cardiovascular disorder in their consideration of subsequent work-up.

Each of the authors have met the criteria accepted to be considered as authors of the manuscript.

All the authors declare that they have no conflicts of interest relevant to the manuscript submitted.

© Beam NW. This is an open-access article distributed under the terms of the Creative Commons Attribution License, which permits unrestricted use, distribution, and reproduction in any medium, provided the original author and source are credited.

Figure 3. Microscopic section of coronary artery atherosclerosis. Note the presence of a thin, slit-like lumen evident at the lower portion of the image. The plaque has classic features, including a “necrotic” center with cholesterol clefts and microcalcifications, and a fibrous cap, separating the necrotic center from the lumen (Hematoxylin & Eosin stain; 20X original magnification).