Morphine before hydromorphone – results of a quality improvement

The increasing use of hydromorphone over morphine as a first line agent in hospitals has raised concerns. Evidence in the literature does not support this change in practice. A quality improvement initiative was undertaken to educate prescribers, nurses and pharmacists on best practices supported by evidence in the literature and growing safety concerns as they relate to the choice of hydromorphone as a first line analgesic.

The “Morphine First” quality initiative was rolled out by providing education, resources and support with expert consultation. Ongoing monitoring of opioid use was performed and feedback was provided to frequent hydromorphone prescribers. Our primary outcome measures were the pattern of morphine and hydromorphone use, safety reports, naloxone administration and patient satisfaction with pain management.

Education, resources, support with expert consultation, monitoring usage, and feedback to frequent prescribers of hydromorphone was successful in leading to increased use of morphine as a first line agent. During this change there were fewer opioid safety reports, less naloxone use and improved patient satisfaction scores for pain control.

Calls from the Joint commission and Agency for Health Care Policy and Research to address pain were answered with an increase in the use of opioids to manage pain [1,2].  The unintended consequences of this response have been a trend to more opioid-related adverse effects and a rise in unintentional overdose deaths attributed to prescription opioids [3].

In 2012, the Massachusetts State Board of Medicine issued an alert calling for organizations to curtail the use of Hydromorphone due to safety concerns with that drug [4]. This joined other national and international reports raising concern about hydromorphone [5,6].  Responding to that call, Massachusetts General Hospital (MGH) reviewed internal data and recognized a changing pattern of utilization whereby hydromorphone appeared to have replaced morphine as a first-line, first choice analgesic. Over a 7 year period, there has been a 5-fold increase in the relative amount of opioids used at MGH that paralleled the growing popularity of hydromorphone, which is 5 times more potent than morphine (Graph 1).

This is supported by the US aggregate production data of opioids which shows almost a 262% increase in the production of hydromorphone from 2003 to 2013 while production of morphine has increased by about 190% [7].

Our data also followed the pattern that raised concerns by others such as the Massachusetts State Board of Medicine [4], about increasing adverse events being reported related to hydromorphone.

The move to hydromorphone as first line first choice analgesic is not well supported by evidence in the literature. Hydromorphone at equianalgesic doses has a similar efficacy and incidence of side effect as morphine [8-10]. Prescribers may overmedicate with hydromorphone however, given a general lack of knowledge regarding its potency and its narrower therapeutic window compared with morphine [11].

Based on a review of internal data and published research, our hypothesis was that increasing use of hydromorphone as the first line analgesic had directly contributed to the escalating use of opioids in the hospital and the rising adverse events. Our quality improvement project proposed to switch the culture back to using morphine as the first line first choice agent for moderate to severe pain. We monitored outcomes such as overall opioid use in the hospital, reported adverse events and patient satisfaction.

This quality improvement initiative was undertaken from June 2013 and evaluated through December 2013 at a 900-bed adult urban tertiary academic medical center with more than 50,000 discharges. This effort was compliant with the Health Insurance Portability and Accountability Act. This project was undertaken as a Quality Improvement Initiative, and as such was not formally supervised by the Institutional Review Board per their policies.

From May through June of 2013, the center for quality and safety provided baseline data on the increasing use of hydromorphone over morphine and the related increase in safety event reporting for hydromorphone. A quality improvement intervention to encourage the use of morphine as the first line analgesic was proposed to the chiefs council, which comprises the chairs of all departments and hospital leadership and their feedback was incorporated into the rollout.

The Quality initiative was rolled out by providing education, resources and support with expert consultation. Ongoing monitoring of hydromorphone use was performed and feedback provided to frequent prescribers.

Education was provided through departmental leadership and lectures at departmental conferences by an expert group. An online educational module was made available. Ordering templates were modified to make morphine the first line analgesic recommended. Equianalgesic dose conversion cards were provided to all trainees and prescribers.

Expert consultation with the pain services was made available 24/7. Further we monitored use of hydromorphone and morphine and provided feedback to high prescribers.

Naloxone use was a proxy measure of safety.  If naloxone was used on the same day at any time after the patient received an opioid, it was considered a rescue drug.

Statistical analysis was performed by using the Pearson χ2 test, used to analyze proportions. A difference with P<.05 was considered to be significant.

When we compared PCA use, which we used as an index indicator of change, our results showed hydromorphone use decreased by 23% and morphine use increased by 54% over the study period (p<0.01) (Graph 2).

The composite HCAHPS patient satisfaction scores for pain control increased from 72% in the first half of the year before the initiative started to 73% in the latter half of the year (Graph 5).

Of interest the rescue drug use (naloxone) in the hospital decreased from 1.2% on the first half of the year to 1.1% in the second half of the year (p=0.2). While the difference was not statistically significant, it was an encouraging decrease in use .

We evaluated the primary outcome measures for the quality initiative, hydromorphone and morphine use, safety events and patient satisfaction. There was a reasonable increase in the use of morphine over hydromorphone in response to the educational initiatives and resources and support provided.

Our secondary review of the rescue drug use in the hospital showed a modest decrease. While this is not significant statistically, it was encouraging.

Limitations of our study include the limited study period of 6 months. There should be ongoing review to sustain the benefits achieved. Further, this was rolled out with education as the primary method and not policy. Sustainable results through education alone are challenging and time intensive.

Education, provision of resources, support with expert consultation and review and feedback of performance for high hydromorphone prescribers was successful change back to increased use of morphine as a first line agent. This change has improved our outcomes as far as reduced safety reports for hydromorphone, decreased naloxone use and improved patient satisfaction scores for pain control.

©2016Gulur P. This is an open-access article distributed under the terms of the Creative Commons Attribution License, which permits unrestricted use, distribution, and reproduction in any medium, provided the original author and source are credited. 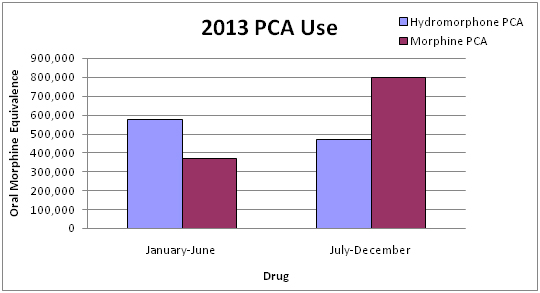 Graph 3. Hydromorphone and morphine use. 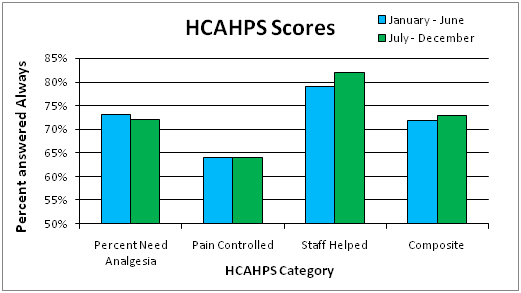