Aphthae are the most frequent inflammatory lesions of the oral mucosa. Adverse drug reactions can represent a challenging differential diagnosis and should be considered as a possible cause. A wide spectrum of drugs can induce oral ulcerations and the most commonly culprit are cariological therapies [1]. The iatrogenous lesions usually resist to conventional treatments while they completely recover following the suspension of the responsible drug. Here we report a case of recurrent aphthous stomatitis due to irbesartan.

A 59-year-old woman complained for a 5-year history of recurrent episodes of major aphthous ulcers of the mouth. Her past medical history was unremarkable except for a mild hypertension well controlled with irbesartan at a dose of 300mg dayˉ¹ dating from 5 years. Upon examination the patient showed a 3-cm irregular oval ulcer on the free gingiva, covered by grayish fibrinous exudates, surrounded by a bright red halo, and a smaller lesion on the upper lip (Figure 1a and 1b) in absence of genital aphthae or any other cutaneous manifestations. 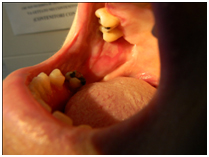 Figure 1a. Irregular oval aphthous ulcer on the oral mucosa in the free gingiva, covered by a grayish fibrinous exudate and surrounded by a bright red halo 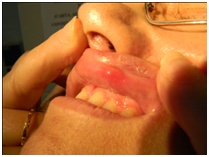 Figure 1b. Small aphthous ulcer on the upper lip mucosa surrounded by an area of erythema and edema

Laboratory investigations showed unspecific modifications, none indicative for Celiac disease or Behçet disease. Biopsy from the oral mucosa was unspecific and not consistent for the diagnosis of lichen or lichenoid eruption. We initially diagnosed this condition as a common major aphthous stomatitis and started several therapeutic approaches both topical and systemic including oral limecyclin, colchicine and steroids. Despite these no stable remission was achieved.

Two months later, when irbesartan was temporarily suspended for a drop of the blood pressure due to the hot weather, the lesions suddenly remitted spontaneously. For the first time in 5 years the patient was free from lesions for several months with a positive rechallenge experienced when she was put back on irbesartan medication. We then tried the rechallenge two more times obtaining each time the same results.

Based on temporal correlation from introduction of the drug and onset of the aphthous stomatitis, recover after drug withdrawal and relapse during rechallenge, irbesartan was identify as the cause of this peculiar clinical presentation and was therefore permanently discontinued. During the next 1-year follow-up none episode of aphthous stomatitis have been observed in our patient.

According with both Naranjo and Kramer algorithms [2], the aphthous stomatitis is a probable ADR caused by irbesartan exposure.

Previous case control study evaluated the risks linked to several drugs exposure in aphthous ulcers such as Ace-inhibitors but did not include sartans [7]. Sporadic case reports described the link between stomatitis and sartans but only the mentioned above correlate aphthous ulcers of the mouth together with this group of drugs.

Sartans modulate the renin-angiotensin-aldosterone system specifically blocking the interaction of angiotensin II at the Angiotensin Type-1 receptor (AT1-R) which is expressed almost ubiquitously in adults, especially in organs involved in cardiovascular control.

Angiotensin Type-2 receptor (AT2-R) is the dominating receptor subtype in fetal tissues and its expression dramatically decrease after birth, being restricted in healthy organism to a few tissues including skin and mucosal epidermal layer, and some dermal structures such as vessel walls [8]. In the adult, dramatic increase of local AT2-Rs has also been observed under pathological conditions for instance mechanical injury or ischemia [9].

The sartans-induced AT1-Rs blockade might unmask AT2-Rs mediated effects. Although the physiological functions of AT2-Rs are not fully understood, experimental data suggest an antiproliferative activity on endothelial cells [10]. Injuries of the oral mucosa might induce AT2-Rs upregulation and trigger the vascular damage leading to an aphthous ulcer in the site of trauma.

To our knowledge this is the first case of aphthous stomatitis due to irbesartan. Further studies are certainly necessary to confirm whether this is a true causal relationship or is just anecdotic.

©2015 Manunza F. This is an open-access article distributed under the terms of the Creative Commons Attribution License, which permits unrestricted use, distribution, and reproduction in any medium, provided the original author and source are credited.

Figure 1a. Irregular oval aphthous ulcer on the oral mucosa in the free gingiva, covered by a grayish fibrinous exudate and surrounded by a bright red halo

Figure 1b. Small aphthous ulcer on the upper lip mucosa surrounded by an area of erythema and edema