Previous studies have shown that accidental intravenous (IV) administration of bupivacaine leads to plasma concentrations from 0.5 till 5 μg•mL−1 (1.7-17 μM), which depresses myocardial conduction and causes caridotoxicity [1-3]. Racemic RS(±) bupivacaine is the most widely used local anesthetic because of its longer effectiveness than lidocaine [4, 5] and selective action on different neuronal fibers. However, RS(±) bupivacaine is 6- to 10-fold more cardiotoxic than lidocaine [6-8], and dextro R(+) bupivacaine is associated with greater negative chronotropism and more cardiac arrhythmias than the levo S(−) isomer [9-11]. This cardiotoxic consequence has been explored in pediatric patients for several decades with controversial results. The results of some studies have suggested that neonates and children may support higher blood levels of bupivacaine after IV administration than adults [12,13], but other studies have demonstrated an increased fetal [14] and neonatal heart susceptibility to RS(±) bupivacaine [15,16].

Our group previously reported a significant difference in lethal dose in younger animals (2 weeks) compared with that in older animals (>4 weeks) for both RS(±) and S(−) bupivacaine [17]. Two weeks of age appeared to be the limit for decreased susceptibility to the toxic effects of bupivacaine because no difference in lethal dose was detected in animals elder than four weeks. On the other hand, dissimilarities in susceptibility to the drugs were detected in the younger group. The lethal dose in 2-week-old animals was approximately 4-fold higher for S(−) bupivacaine and approximately 2-fold higher for RS(±) bupivacaine than that in older animals. This is in agreement with reports that human neonates and children support a higher plasma concentration of bupivacaine after accidental IV administration [12,13]. No data have been reported comparing toxicity profiles between the bupivacaine isomers in human neonates or children.

In the present study, we investigated the age dependency of the cardiac toxicity induced by RS(±) bupivacaine and its S(−) isomer. Specifically, our aims were to find possible age-related differences induced by the presence of RS(±) or S(−) bupivacaine in heart rate (HR), PR interval, and QRS complex duration as well in the induction and reversion of cardiac arrhythmias using hearts obtained from younger (2 weeks) and older animals (16 weeks).

All the protocols used in this work was approved by the Universidade Federal do Rio de Janeiro Animal Care and Use Committee. Animals were accommodated in a temperature, humidity, and 12-h light/dark controlled room. The animals had access to water and food ad libitum. All exertions were made to minimize the suffering and numbers of animals used in this study.

Hearts were quickly excised, retrogradely perfused through the aorta for 5 min at 10 mL•min−1, and submersed into a chamber filled with oxygenated Tyrode’s solution (containing in mmol/L: 123 NaCl, 1.8 CaCl2, 5.4 KCl, 1.2 MgCl2, 1.4 NaH2PO4, 24 NaHCO3, and 10 glucose; bubbled with 95% O2-5% CO2; pH 7.4 at 35 ± 2 °C) for the Langendorff preparation. For electromechanical uncoupling, blebbistatin (10 μmol/L; Ascent Scientific, Cambridge, UK) was added after dye loading and before slicing/optical mapping. All compounds were acquired from Sigma-Aldrich (Dorset, UK) unless otherwise stated. After 30 min, electrocardiogram (EKG) recordings were obtained through three glass pipette electrodes filled with 1 M KCl solution positioned in the chamber, and the whole heart was exposed to incrementally increasing concentrations (0.1–10 μM) of RS(±) bupivacaine or S(−) bupivacaine added to the solution for a duration of 5 min each. This local anesthetic concentration range was based on that used in a previous experiment performed with an isolated heart [18]. The EKG was recorded on a polygraph (Gould Polygraph Brush 2400; Gould Inc., Valley View, OH) previously (control) and 5 min after the adding of each concentration of RS(±) bupivacaine or S(−) bupivacaine and 30 min after washout.

The difference in heart rates between 2- and 16-week-old rats was statistically significant for S(−) bupivacaine at a concentration of 10.0 μM (P<0.05), as shown in Figure 1.

The differences in the QRS complex duration in hearts derived from 2- and 16-week-old rats were statistically significant in the presence of RS(±) bupivacaine at all concentrations tested and in the presence of S(−) bupivacaine at concentrations from 1.0 to 10.0 μM (P<0.001 for all comparisons of the same drug at the same dose), as shown in Figure 3.

Effects of various concentrations of RS (±) and S (−) bupivacaine on the induction and reversion of cardiac arrhythmias in isolated perfused hearts obtained from rats of two ages.

In this study, we investigated the age dependency of the cardiac toxicity induced by RS(±) bupivacaine and its S(−) isomer. A significant age-related difference in the effects of both RS(±) and S(−) bupivacaine on HR, PR interval, and QRS complex duration in addition to the induction and reversion of cardiac arrhythmias was observed between younger (2 week old) (which is an age approximately similar to 3-year-old humans) and older animals (16 weeks).

The cardiotoxicity of RS(±) bupivacaine and its isomers is attributed to their blocking sodium [19], potassium [20], and L-type calcium channels [18,21] in the sarcolemma of cardiomyocytes. In addition, local anesthetics can either decrease [22,23] or increase Ca2+ mobilization [24] from the sarcoplasmic reticulum and also decrease the sensitivity of myofilaments to Ca2+ [25]. The stereoselective effects induced by the bupivacaine isomers, R(+) and S(−), have been intensively studied to determine which causes less cardiotoxicity while still providing potent nerve blockade. Previous laboratory and clinical studies have shown that R(+)and S(−) bupivacaine have similar local anesthetic durations [26]; however, R(+) bupivacaine is associated with a more intense negative chronotropism [19] and a more arrhythmogenic effect than the S(−) isomer [9-11]. In the present study, RS(±) bupivacaine, especially at the higher concentrations, significantly lowered HR in 16 and 2-week-old rats, with the effect more prominent in the older animals.

Compared with S(−) bupivacaine, RS(±) bupivacaine caused a striking effect in both age groups, extending the PR interval approximately 160% and 136% in 16- and 2-week-old rats, respectively, at the highest concentration. The effects of both compounds on the PR interval prolongation were more prominent in older rats for most concentrations. This finding for RS(±) bupivacaine may be explained, at least in part, by the high number of atrioventricular blocks, from mild to severe, induced in both the younger and older animals. The QRS complex corresponds to the depolarization of the right and left ventricles of the heart. Broadening of the QRS complex reproduces reduced intraventricular conduction velocity, which typically results from altered Na+ channel function. As expected, RS(±) and S(−) bupivacaine caused a marked effect in 16-week-old rats, in comparison to 2-week-old rats, increasing the QRS complex duration approximately 298% and 178%, respectively, at the highest concentrations, with the effect most exacerbated by RS(±) bupivacaine. There was no difference in this effect between these local anesthetics in young rats. These findings may explain the high number of severe ventricular arrhythmias (ventricular tachycardia, ventricular fibrillation, and asystole) observed when the hearts obtained from 16-week-old rats were exposed to RS(±) bupivacaine.

The cardiac changes in the electrical properties induced by local anesthetics might be linked to the variations in the regulation of intracellular Ca2+ concentration that progressively changes with age. In adults, the Ca2+ source required for myofibril activation and cardiac contraction hang on a Ca2+-induced-Ca2+-release (CICR) route that is prompted by a small amount of Ca2+ entry into the cell via an L-type Ca2+ channel. In newborns, CICR is not as efficient, likely because of the immaturity of the transverse tubule [30], a lower density of RyR2 [31], and decreased SERCA2 activity [32]. The main sources responsible for cardiac contraction in newborns are the Ca2+ influx via the L-type Ca2+ channel [33-36] and the Na+/Ca2+ exchanger, which is reversely activated by a decreased intracellular Na+ concentration [32]. There is no data regarding the effects of bupivacaine and its S(−) isomer on the L-type Ca2+ channel nor in the Na+/Ca2+ exchanger in neonatal rats. The negative chronotropic effect observed with RS(±) bupivacaine may be explicated by a reduction in Ca2+ influx into the cell, triggered by direct interaction with L-type Ca2+ channels on phases 4 and 0 of the sinus node action potential [18,21]. Thus, we suggest that RS(±) and S(−) bupivacaine promote a more significant cardiodepressant influence in elder animals since the intracellular Ca2+ concentration depends totally on the activation of L-type Ca2+ channels, and these local anesthetics produce a nonstereoselective blockade [18]. As a consequence, the CICR from intracellular stores may be impaired in these older animals. Previous studies have demonstrated that the diastolic Ca2+ concentration in spontaneously activated intact myocytes increased 15-fold in the presence of RS(±), R(+), and S(−) bupivacaine. These data suggest that bupivacaine may impair the mechanisms for removal of Ca2+ from the cytoplasm, such as via SERCA2, the Na+/Ca2+ exchanger, or the ATP-dependent Ca2+ pump, which are located in the sarcolemma [37]. Furthermore, the Ca2+ threshold for activation of myofibrils is reduced by RS(±) and S(−) bupivacaine, but this effect is not age dependent [17]. This set of events may have led to higher Ca2+ concentrations inside the cell, inducing the extended PR interval and QRS complex duration, which contributed to the genesis of the arrhythmias observed in the present study.

The first limitation in extrapolating the interpretation of our results is that this study used an animal model. Furthermore, this was an ex vivo model, which may potentially show differences from in vivo pharmacokinetics. Finally, future studies should endeavor to use a larger sample size.

GZS and RTS have received financial support (fellowships) from CNPq.

© 2017 Kiuchi MG. This is an open-access article distributed under the terms of the Creative Commons Attribution License, which permits unrestricted use, distribution, and reproduction in any medium, provided the original author and source are credited. 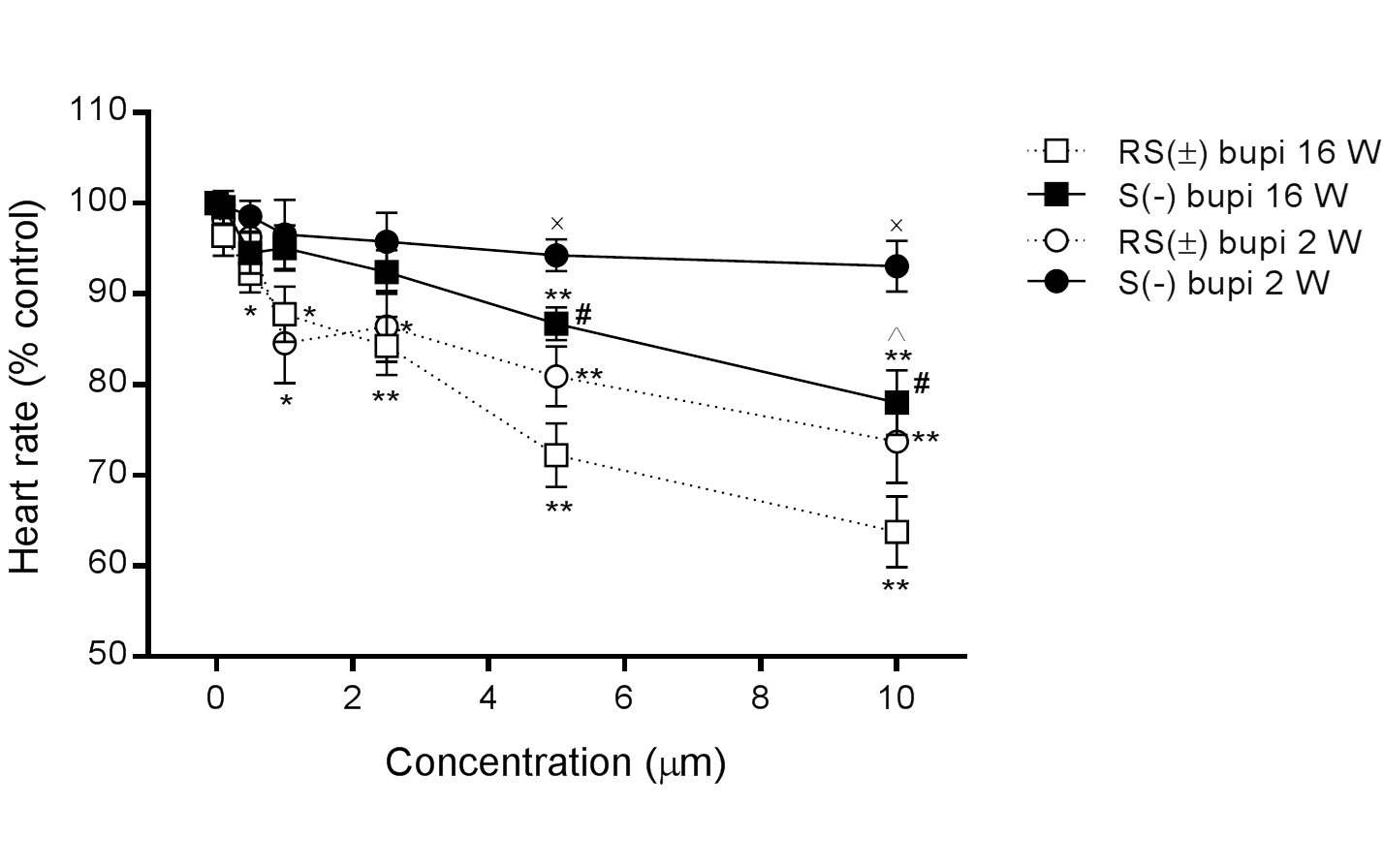 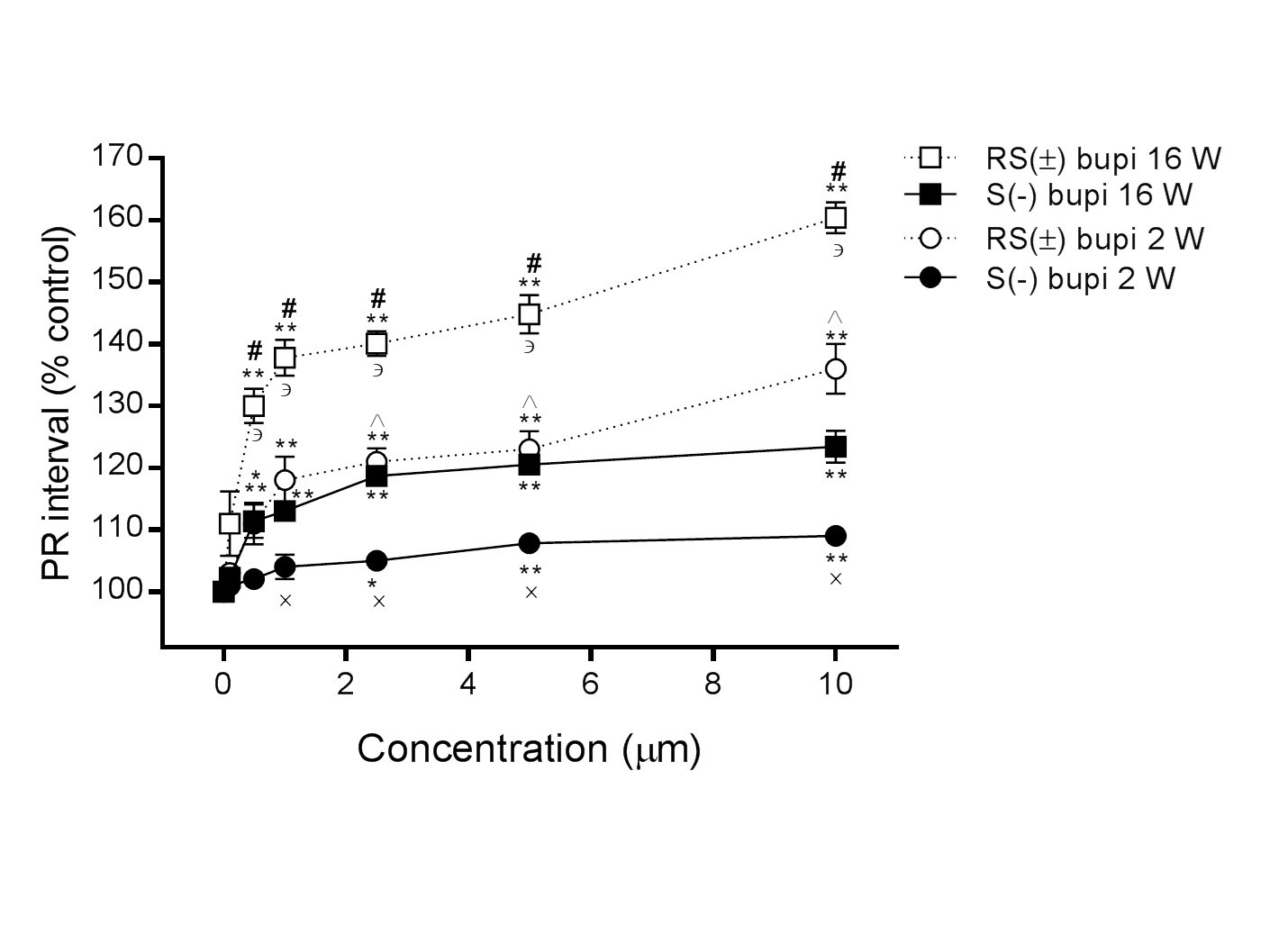 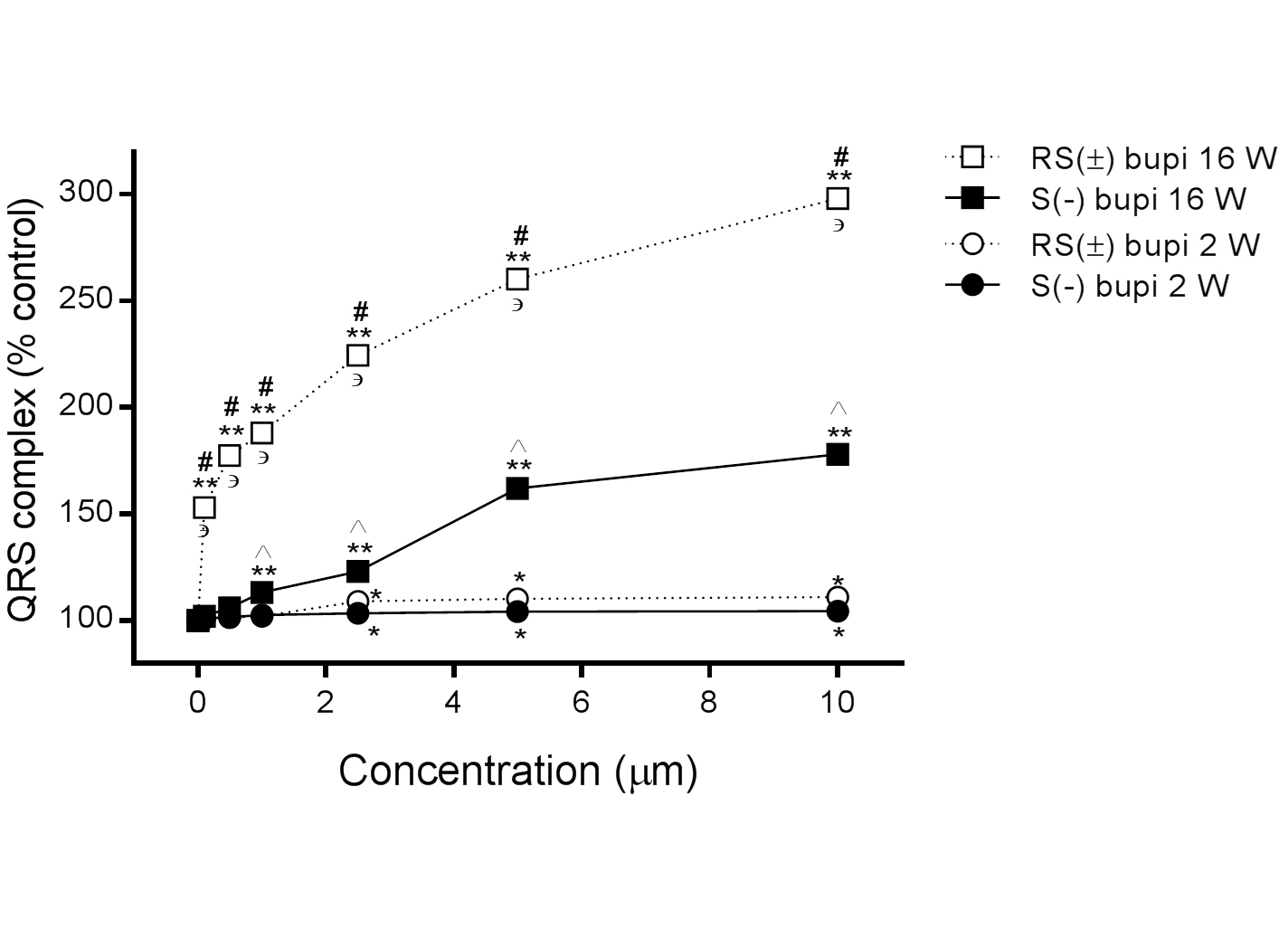 Effects of various concentrations of RS (±) and S (−) bupivacaine on the induction and reversion of cardiac arrhythmias in isolated perfused hearts obtained from rats of two ages.