Congenital FVII deficiency is the most frequently encountered defect among the Rare Bleeding Disorders (RBD). Geographical distribution is uneven but it has been described worldwide. Factor FVII Padua (Arg304Gln) is a Type 2 variant with shows FVII activity levels which varies with the origin of the thromboplastin used in the assay system. It is low (less than 5%) using rabbit brain thromboplastins, but normal (100%) with OX-brain preparations. Thromboplastins of human origin (placenta) or human recombinant reagents yield intermediate levels (40-50% of normal). FVII antigen is normal. FVII Padua has been described in many parts of the world but it seems rare in Latin America where only a few heterozygotes cases have been described but no homozygotes. We described here the first FVII Padua case seen in Argentina and, probably, in Latin America. The proposita is a 64 year old female who had a Spanish background and no bleeding tendency. She was found to be homozygote for the Arg304Gln mutation whereas her daughter was heterozygote and also asymptomatic. The reasons for the rarity of this mutation in Argentina and in Latin America are discussed.

Congenital FVII deficiency is the most frequent defect among the Rare Bleeding Disorders. Its prevalence is estimated to be 1: 500.000 [1-3].

The first family was described in 1951 by Alexander et al. but laboratory studies had suspected that an “accelerator” of prothrombin conversion, different from FV, existed a few years before 1951 [4].

FVII deficiency is in fact one of the only two congenital coagulation disorders, that were not discovered by the description of a family with a clotting defect that did not fit the previous knowledge on blood coagulation; the other is FXIII deficiency [3].

Since 1951, several cases have been described all over the world. Most of the recent have been studied, also, by means of molecular biology techniques [1,2].

About 200 mutations, have been described, the majority missense mutations [2]. The Arg304Gln (or as listed today, the Arg364Gln) mutation has been originally described in 1978 in Padua [5,6]. Subsequently this variant was seen in many parts of the world [7-17]. A special concentration of the defect is seen in three areas, namely: Mediterranean countries, USA (African-Americans) and Japan [18].

The defect has the peculiar feature to cause a discrepant behavior in the binding to tissue factor of different origin. In other words the FVII level changes radically according with the tissue thromboplastin used in the assay system [5,19,20].

This behavior is typical of FVII Padua so that a diagnosis of the defect can be made even without molecular biology techniques. There is in fact only another mutation involving the same amino acid (Arg304), that shows a similar behavior, namely FVII Nagoya (Arg304Trp) [23]. However since the Arg304Trp mutation is rare, contrary to the Arg304Gln, it can be safely assumed that a patient presenting this tissue factor dependent behavior is indeed a case of FVII Padua. FVII Padua has been rarely described at the heterozygosis or compound heterozygosis level in Latin-American, exactly in Brazil, Venezuela and Costa Rica but no homozygotes have ever been reported [14]. It has never been described in Argentina in any form, heterozygous, homozygous or compound heterozigous.

The proposita is a 64 year and female from northeastern Argentina (Chaco Province) with a Spanish background. Parents were non consanguineous. The father died after prostate carrier surgery which was referred to have been accompanied by excessive bleeding. A half-brother of the proposita (result of her father previous marriage) is reported to have frequent epistaxis but it is not known if the patient has a clotting defect.

There are no other cases of bleeding tendency in the family. The proposita’s husband died at the age of 19 because of drowning but he had a negative personal and family history for bleeding. The proposita underwent appendectomy in young age without undue bleeding; tooth extractions were also referred not to be accompanied by bleeding. Menstruations were normal and delivery by cesarean section at the age of 20 was uneventful. A diagnosis of FVII deficiency was made at the age of 60 in preparation for a colonoscopy. Because of this diagnosis, the patient underwent video colonoscopies under the protection of two aFVII concentrates (dosage unknown) without any undue bleeding or side effects. During this procedure a small polyp was removed. The control procedure was carried out 2 years later, under the protection of a total doses of 1,3 mg of aFVII concentrate. Again there was no bleeding or side effects and the procedure failed to show relapse of polyps.

At present the patient is in good health and has no bleeding manifestations.

The daughter of the proposita is 44 year old and has never presented with any bleeding symptom. Her menstrual cycles are also reported as normal.

PCR was carried out in a total volume of 15 μL with 50 ng of genomic DNA, 10 mM of each primer, and 9 µl of PCR Master Mix, 2X (Promega, Madison, Wisconsin, U.S.A.). After an initial denaturation step at 95°C for 5 minutes, amplification was performed for 35 cycles (denaturation at 95°C for 1 minute, annealing at 57°C for 1 minute, and extension at 72°C for 2 minutes). PCR products were bidirectionally sequenced using the ABI PRISM BigDye Terminator Cycle Sequencing Ready Reaction Kit and ABI3130 Genetic Analyzer (Applied Biosystems, Foster City, Ca, U.S.A.).

Table 1. Coagulation study in the proposita. Seven differents thromboplastins were used for the evaluation of the defect. In Factor VII assays, values of less than 1% of normal have been reported as 1%.

The daughter had a normal aPTT and a slightly prolonged or borderline PT. FVII level was 37-52% with RBTs and 63-74 of normal with the thromboplastin of human placenta or with the human recombinant ones. Genetic analysis showed that the proposita was homozygote for an Arg304Gln mutation in exon 8 whereas the daughter was heterozygote for the same mutation (Figure 1). The study of the other exons failed to show any other abnormality. 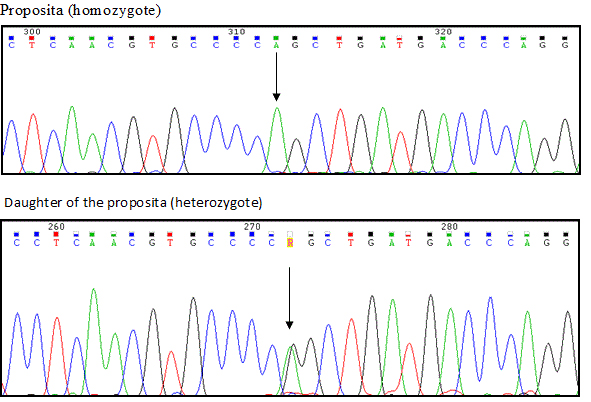 Figure 1. DNA sequencing pattern in the proposita (top) and in her daughter (bottom). The proposita is homozygote for Arg304Gln whereas the daughter is heterozygote for the some mutation. No other mutation are present in the two propositas.

The Arg304Gln mutation, together with the Ala294Val represent the most frequent mutations in FVII deficiency [2]. It is interesting to note that, despite the fact that the two mutations are located in the catalytic domain controlled by exons 8, they are different. In fact the Ala249Val mutations is a Type 1 defect (low activity and low antigen) whereas the Arg304Gln (FVII Padua) mutation is a Type 2 defect (low activity, normal antigen) [2,5,6].

After the first cases, several other patients were described in many parts of the world. A least three main areas of the world show a concentration of the defect, namely the Mediterranean area, the USA (Afro- Americans) and Japan [13,16,18,22].

Since these three areas have nothing in common it is plausible to conclude for a multifounder effect. This indicates that Arg304 is a hot spot for mutations. The description of an Arg304Trp mutation (FVII Nagoya) is in agreement with the hot-spot assumption [23].

The substitution of Arg304 with tryptophan instead of glutamine (FVII Nagoya) does not change the peculiar clotting pattern [23].

Contrary to FVII Padua, FVII Nagoya appears rare, having been described so far only in two patients  in Japan [23]. Since the clotting pattern is the same regardless of the mutated glutamine or tryptophan it seems that the Arg304 plays an important role in binding to tissue factor. This is in agreement with the observation that mutation at Pro303Thr is not followed by the appearance of the typical thromboplastin dependent coagulation pattern [24].

These is another area of FVII strictly involved in binding to tissue factor, namely the first EGF domain controlled by exon 4 [25-29].

The exact relation between these two area of FVII involved in binding to tissue factor has not been fully clarified yet [25,26]. It seems that the EGF area (exon 4) mainly binds the protease to its receptor whereas interaction with at least one additional protease domain residue (exon 8) is needed for the full development of the catalytic activity of the bound protease [27].

This apparently is the first homozygote patient with this mutation seen not only in Argentina but also in Latin-America.

A few heterozygotes and a compound heterozygote (combined with the Gly365Cys mutation) have been reported from Brazil, Venezuela and Costa Rica [14,29,30]. These are the only cases listed in FVII mutation Data Bases.

Whether this is due to genetic reasons or to a defective diagnosis remains to be proven. The latter hypothesis seems more likely since this rarity is strange in view of the fact that several cases have been described in European countries which were in the past the source of emigrants to Argentina (mainly Spain, Italy and Israel).

The proposita refers a Spanish background. This is not surprising since occasional patients with a clotting pattern compatible with a FVII Padua diagnosis have been described in Spain [31]. However there is no molecular biology demonstration of the defect. The intense genetic crossing that occurred in the past among the people of the Mediterranean countries and in Argentina herself may fully justify the finding.

There are a few other cases of FVII deficiencies seen in Argentina but they lack molecular biology studies [32-35]. The clotting data available for some of these patients seem to exclude that they were cases of FVII Padua [35]. Due to the paucity or even absence of bleeding symptoms shown by patients with FVII Padua, the administration of aFVII concentrates in the proposita was unjustified. Thrombotic events both arterial and venous have been reported in these patients after replacement therapy [36,37]. Furthermore, when dealing with patients with congenital FVII deficiency, clinical manifestations have always to be kept in mind besides the results of the clotting tests.

A final consideration is indicated. There is today a wide discrepancy between the number of RBD reported in Latin American and a population of about 600 million. Such discrepancy should be eliminated much to the benefit of patients who suffer for a bleeding tendency without knowing the reason for it. Hemophilia A or B and VW Disease patients are probably more easily observed, diagnosed and treated. However even RBD, taken altogether, represent an important segment of the bleeding patients.

We hope this study will stimulate in Argentina and Latin American countries at large, the search for rare bleeding disorders as it has been recently proposed for FX deficiency [38].

This study was supported in part by the “Associazione Emofilia ed altre coagulopatie delle tre Venezie”.

©2016 Girolami A. This is an open-access article distributed under the terms of the Creative Commons Attribution License, which permits unrestricted use, distribution, and reproduction in any medium, provided the original author and source are credited.

Table 1. Coagulation study in the proposita. Seven differents thromboplastins were used for the evaluation of the defect. In Factor VII assays, values of less than 1% of normal have been reported as 1%.

Figure 1. DNA sequencing pattern in the proposita (top) and in her daughter (bottom). The proposita is homozygote for Arg304Gln whereas the daughter is heterozygote for the some mutation. No other mutation are present in the two propositas.