The end of pregnancy and beginning of lactation marks the transitional period in cows. During this period, reductions on dry matter intake (DMI) together with hormonal changes are critical elements of negative energy balance (NEB) establishment [1]. Manifestation of metabolic disorders and nutritional disorders during the transitional period will determine how severe will be the NEB, and hence dictate disease incidence in a herd [2,3].

In cases of severe NEB and nutrient imbalance, decreases of glucose precursors will trigger lipolysis mechanism to reach energy demands. Thus, when the rate of triglyceride breakdown overcomes the ratio of very low density lipoprotein (VLDL) complexes formation, it characterizes fat deposition and accumulation by the liver, and determine hepatic steatosis occurrence [4,5].

Cattle type ruminants as the cow are typically classified according its feed behavior, which is normally based on high dense fiber and low selection capability [6,7]. The interaction between, low feed selective ability and severe droughts caused by actual climate changes are reflected as an important factor to determine depraved appetite in ruminants [6,8,9]. Therefore, associations of these particularities reflected in the occurrence of a pregnant miniature cow that ingested an enormous amount of Mangifera indica fruit during severe drought in northeastern Brazil, causing seed accumulation in the forestomach, limiting nutrient absorption and triggering fatty liver development.

The four-year-old crossbreed mini-cow with a pass 24 hour-long sternal decubitus, presented a brick red ocular mucous, scar in mandibular commissure and absence of incisive teeth, dehydration, ectoparasites presence and temperature of 103,1ºF (Figure 1A). During rectal palpation a late pregnancy was detected and ultrasonography exam confirmed the presence of a live fetus. One day after the arrival of the cow it was noticed the elimination of mucous vaginal plug. A new rectal palpation showed maternal-fetal distortion, leading to an emergency caesarean (Figure 1B). Even though the calf was on term it came to death minutes after birth. The cow was submitted to antibiotic and anti-inflammatory therapy but showed no positive results and stayed in lateral decubitus until its death four days after surgery.

Figure 1. (A) Miniature cow on lateral decubitus; (B) Uterus Exposed during cesarean section.

During necroscopy exam was found ulcers on left side of lingual region, papillomatoses formation in the bottom of esophagus and cardiac sphincter overspreading the rumen. The liver was diffusely pale, yellowish and with a friable consistency (Figure 2 A). A tremendous amount of mango (Mangifera indica) seeds, totalizing 755 seeds, were found inside the rumen, causing a partial obstruction of the reticulo-omasal orifice (Figure 2 B and C). Additionally, were found other obstructive foreign bodies as plastic bags, the abomasum had the presence of ulcers and abomasal worms. Results of histopathology fragments reveled that, approximately 85% of the hepatic parenchyma was affected. Therefore, lesions were characterized by diffusely swollen hepatocytes, in addition to few discrete and clear lateralized vacuoles in the nucleus (lipid degeneration) [10,11] (Figure 2D). 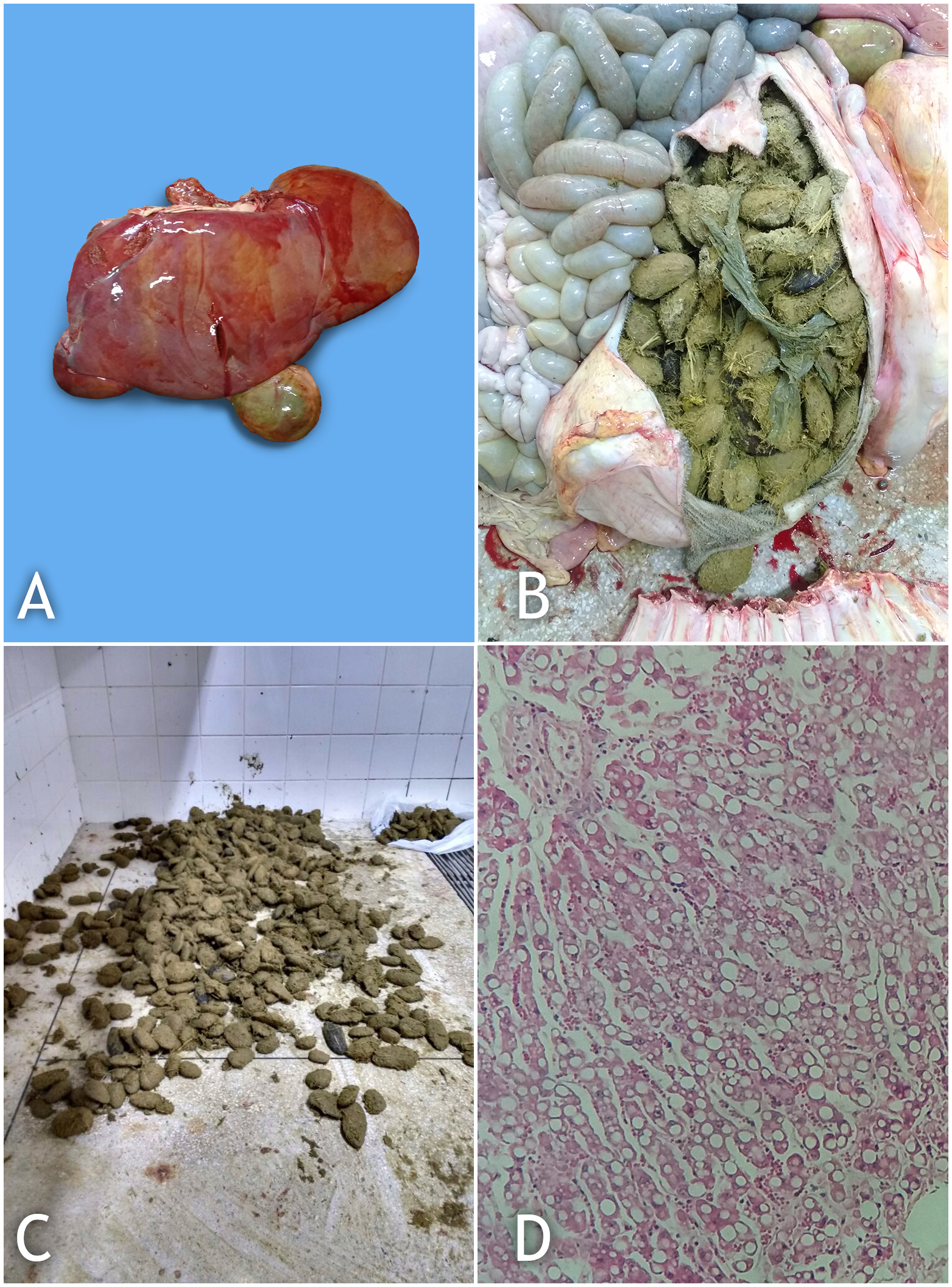 Figure 2. (A) Liver with yellowish aspect and friable consistency; (B) Compacted rumen with a total of 755 Mangifera indica seeds; (C) Mango seeds remove from the rumen; (D) Hepatocytes and lateralized vacuoles in the nucleus.

Considering the clinical findings, the animal was in a late pregnancy stage, and therefore, with high energy demands, characterizing a negative energy balance status. Due to this energy deficit and high demands, most infectious diseases and metabolic disorders occur during this period [1,12]. Throughout the end of pregnancy and early lactation, cows metabolize body lipids from adipose tissues and deposit them in the liver. In cases of extreme NEB, high rates of lipid metabolism might lead on hepatic triglyceride accumulation. Moreover, if this triglyceride infiltration becomes severe, hepatic lipidosis syndrome, also called fatty liver is the result [1,11,13,14].

In fact, what happened with the mini cow was an increase in NEB intensity due to the partial obstruction of the reticulo-omasal orifice, caused by the enormous amount of mango seeds in the rumen. The limited rate of rumen content flow through the reticulo-omasal orifice, diminished nutrient absorption that would benefit the animal. This limitation caused a severe adipose tissue mobilizations and consequently triglyceride accumulation in the liver, which explained the lesion observed during necropsy and histopathologic exams.

Considering what was expose due to a NEB in consequence of late pregnancy phase, combined with the partial obstruction of reticulo-omasl orifice, a high energy demand and fat mobilization established a severe hepatic steatosis scenario, which was determinant to metabolic privations and the animal’s death.

© 2017 Costa de Sousa SC. This is an open-access article distributed under the terms of the Creative Commons Attribution License, which permits unrestricted use, distribution, and reproduction in any medium, provided the original author and source are credited.

Figure 1. (A) Miniature cow on lateral decubitus; (B) Uterus Exposed during cesarean section.

Figure 2. (A) Liver with yellowish aspect and friable consistency; (B) Compacted rumen with a total of 755 Mangifera indica seeds; (C) Mango seeds remove from the rumen; (D) Hepatocytes and lateralized vacuoles in the nucleus.