Effect of ondansetron on postoperative shivering after craniotomy

Postoperative shivering (POS) is anearly complication following craniotomy. Preventive pharmacologic drugs are the mainstay of treatment. Meperidine is the drug of choice but with increased risk of apnea.

To assess the preventive effect of Ondansetron on POS after craniotomy.

In a randomized, double-blinded, placebo-controlled trial, 80 patients with ASA I to II between ages of 20-60 years scheduled for elective craniotomy were enrolled in the study. Patients received either intravenous ondansetron 4 mg (n = 40) or saline (Control group) (n = 40) 10 minutes before end of surgery.

Ondansetron could significantly decrease post-operative shivering incidence after craniotomy compare to placebo. Ondansetron does not have any significant effect on core or peripheral temperature.

Preventive pharmacologic measures are the mainstay of treatment of post-operative shivering. Nonpharmacologic approaches such as maintaining ambient temperature, warming air blankets [4] and intravenous infusions are also effective as pharmacologic ones [5]. Length of anesthesia and type of surgery definitely are determinants for POS [6]. POS have some unwanted consequences such as patients discomfort, increase in oxygen consumption, and cardiovascular events.

The 4- to 8-cycle/min waxing-and-waning pattern of post shivering apparently is simple thermoregulatory response to intraoperative hypothermia. On the other hand, it may result from anesthetic-induced disinhibition of normal descending control over spinal reflexes. The neurotransmitter pathways involved in the mechanism of POS are poorly understood.

Meperidine, Clonidine, and Physostigmine are all effective treatments, indicating that opioid, alpha 2-adrenergic [7] and anticholinergic receptors are probably involved. Other drugs such as Tramadole and Nefopam [8] inhibitors of amine reuptake, Ketanserin a 5-HT2 antagonist has also been used for prevention of shivering during spinal anesthesia with more stable hemodynamics [9]. Although Tramadole and Meperidine are available drugs for prevention of POS, however, both drugs could increase intra cranial pressure (ICP) and induce seizure. Therefore, Clinicians had been disinclined to use them in post-craniotomy shivering.

5-HT3 antagonist could inhibit or prevent shivering but their effect in post-operative shivering is still debated [10]. Ondansetron is a 5-hydroxytryptaminergic (5-HT3) receptor antagonist. Although some studies have reported 5-HT3 may be effective receptor in postanesthesia shivering pathway, however, the results remained controversial.

The aim of this study was to assess the preventive effects of Ondansetron on POS after craniotomy.

The study was reviewed and approved by the University Review Board and Hospital Ethics Committee. Information about trial was given comprehensively both orally and in written form. All patients gave their informed written consents prior to their inclusion in the study accordingly.

Duration of study was 1 year period from May 2014 to May 2015. In a randomized, double-blinded, placebo-controlled trial, 80 patients with ASA class I to II, age between 20 to 60 years, BMI less than 30 kg/m2, no history of hyper or hypothyroidism or Parkinson’s disease, and scheduled for elective craniotomy were included in the study. Patients were randomly assigned to one of the groups of study, Ondansetron or control, based on accidental numbers. Patients were excluded if they had perioperative fever (temperature>38), received blood transfusion more than 4 units of pack cells, or used medications to alter thermoregulation during surgery were excluded from the study.

Eighty patients were enrolled in the study and were randomly assigned to receive either ondansetrom or normal saline. Randomization was performed using accidental numbers assigned by computer to each case. Since it was double-blinded the anesthesiologist administering drug was not aware of group of patient and syringe content (allocation concealment). Besides, physician who evaluated the shivering and other monitoring were not aware of group of patient. Patients received intravenous Ondansetron4 mg (2 ml) (n = 40) in ondansetron group or normal saline (2 ml) (n = 40)10 minutes before end of surgery.

Patients were pre-oxygenated with 5 lit/min 100% O2 for 3 to 5 min. For premedication, fentanyl 5 microg/kg and midazolam 0.02 mg/kg was administered. Induction of anesthesia was performed by the same method in all patients. The anesthesia was induced by Sodium thiopental 4-6 mg/kg and Lidocain 1.5 mg/kg and cisatracurium 0.2 mg/kg. Intubation was performed under smooth direct laryngoscopy after 60-90 seconds when TOF=0. Endotracheal tube size was selected after laryngoscopy under direct visualization. Anesthesia was maintained with propofol 75-150 µg/k g and 0.7 minimum alveolar anesthetic concentration (MAC) isoflurane and 50% nitrous oxide/50% oxygen. Extubation was performed using the same method in both groups, when TOF>0.7 and patient was fully awaked, neuromuscular block was reversed (Neostigmin 0.05 mg/kg+Atropin =0.02 mg/kg). In recovery, patients only received O2 5 lit/min via face mask.

Fluid therapy during surgery was performed using standard method. The total fluid requirement was measured based on composition of compensatory intravascular volume expansion (CVE), deficit replacement, maintenance fluids, restoration of losses and substitution for fluid redistribution (third space fluids). Maintenance fluid was calculated based on the 4-2-1 rule. Each ml of blood loss was compensated by 3 ml of crystalloids or 1 ml of colloids or 1 ml of blood if indicated. All administered fluids were warmed up prior to infusion.

Shivering was evaluated during the postoperative period by observation of shivering movements more than 10 seconds duration. The occurrence of shivering was documented clinically during recovery by physician who was unaware of the group assignment.

Blood pressure and heart rate were recorded before surgery and every 2 hours during operation and 10 minutes after entering recovery room.

Statistical calculations were conducted using SPSS 20 (Chicago, IL, USA). The parametric variables were presented as mean ± SD and were analyzed by student t-test; non-parametric variables were analyzed by Chi-Square or Mann-Whitney U-test. Multivariate regression analysis was performed to determine relative risk of occurrence of shivering in ondansetron group compare to control adjusting for age, sex, and duration of surgery. P<0.05 was considered as statistically significant. Sample size was estimated using sample size calculator software with 95% confidence interval, p=0.05 and power of 80% and difference between two groups of 30% in primary outcome based on pilot study.

In a randomized clinical trial 80 patients were enrolled in the study, in which 40 of them received ondansetron and 40 patients received normal saline. Age, sex, and BMI were not significantly different between two groups of study (p>0.05) (Table 1).

Table 1. Demographic characteristics of patients in two groups of study

Postoperative shivering was observed in 2 patients (5%) in Ondansetron group which was significantly lower than 10 patients (25%) in control group (P = 0.012) (Figure 1). 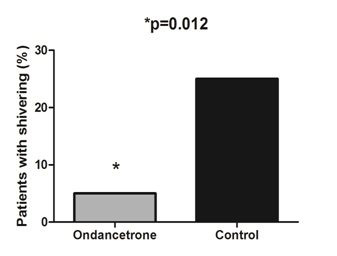 Figure 1. Frequency of postoperative shivering in two groups of study.

As it is illustrated in Figure 2, within each group, postoperative core and peripheral temperature decreased during operation; however there were no significant differences between two groups at any time point. Mean of both core and peripheral temperature were not significantly different between ondansetron and control groups in pre, peri, and post operation time points (p>0.05) (Figure 2). 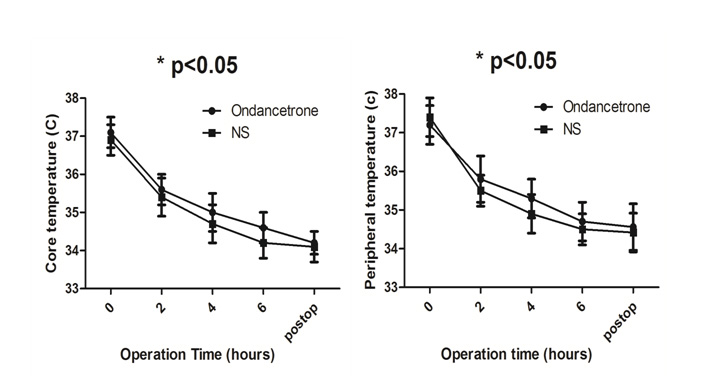 Figure 2. Core and peripheral temperature during operation and in post operation in two groups.

In this study, the effect of ondansetron on postoperative shivering (POS) incidence was studied. Our results showed that ondansetron (4 mg IV) given during anesthesia significantly prevents POS compare to control without affecting the core-to-peripheral redistribution of heat during general anesthesia. This suggests that ondansetron, a 5-HT3 antagonist, have a role in prevention of POS after craniotomy.

In our study, POS was observed in 2 patients (5%) in Ondansetron group which was significantly lower than 10 patients (25%) in control group. Ondansetron decreased incidence of shivering almost 4 times compare to normal saline. Anesthesia could cause shivering due to general hypothermia while thermoregulation being suppressed by anesthetics. Propofol [11] and Isoflurane[i] [12] produce a marked and linear decrease in cold-response threshold including vasoconstriction and shivering thresholds synchronously. Although incidence of shivering after craniotomies has not been determined in comprehensive studies, however, it may be less than other surgeries due to extensive preventive therapies in craniotomies [13].

Temperature thresholds for vasoconstriction and shivering are often higher than normal in brain-injured patients; therefore, these thermoregulatory defenses may occur more vigorously and at higher temperatures in these individuals. Our results showed that the core and peripheral temperature significantly decreased from preoperative to postoperative; besides, there were no significant differences in core or peripheral temperature trend between Ondansetron and control group in perioperative period. In other words both core and peripheral temperature were decreased in both groups even after ondansetron was administered 10 minutes before end of operation. This implies that ondansetron probably acts by a central inhibitory mechanism and modifying thermoregulatory inhibition.

Other studies have showed that Ondansetron can effectively reduce POS compare to control group [14,15]. In an interesting meta-analysis, Tie et al. [16] showed that Ondansetron has a preventive effect on postanesthesia shivering without a paralleled side effect of bradycardia. Even in coronary artery bypass graft (CABG) patients, it was demonstrated that ondansetron is more effective in preventing shivering after Off-pump CABG than meperedine [17]. Nevertheless, controversies over ondansetron effect in POS are still continuing. Browning et al. [18] showed that prophylactic ondansetron does not prevent shivering or decrease shivering severity during cesarean delivery under combined spinal epidural anesthesia. In a trial, Administration of two different doses of intravenous ondansetron, 6 mg and 12 mg, significantly attenuates spinal induced shivering compared to the control saline group [19]. Others have depicted the preventive effect of ondansetronon POS after general anesthesia in gynecological surgery [20]. Prophylactic Ondansetron (4 mg) significantly decreased shivering in patients undergoing spinal anaesthesia without significant side effects [21].

Mechanism that ondansetron suppress shivering is supposedly through 5-HT3 antagonism. Ondansetron probably acts by a central inhibitory mechanism on postanesthetic shivering through 5-HT3 pathways by changing thermoregulatory set points. Clinically, our result indicated that ondansetron effect on body temperature is similar to control which emphasize its central effect. Various receptors like μ-agonist Meperidine is considerably effective drug in treating shivering. However, the action of meperidine is in part mediated by non-μ-opioid receptors including κ activity and also has central anticholinergic activity [22]. In addition, it has been showed that both ondansetron and meperidine altered the correlation between the core temperature and block level during spinal anesthesia [23].

In conclusion, ondansetron could significantly decrease post-operative shivering incidence after craniotomy compare to placebo. Ondansetron does not have any significant effect on core or peripheral temperature.

©2015 Teymourian H. This is an open-access article distributed under the terms of the Creative Commons Attribution License, which permits unrestricted use, distribution, and reproduction in any medium, provided the original author and source are credited.

Table 1. Demographic characteristics of patients in two groups of study

Figure 1. Frequency of postoperative shivering in two groups of study.

Figure 2. Core and peripheral temperature during operation and in post operation in two groups.