Depression and anxiety in elderly immigrants in Germany

Method: Cross-sectional study on depression and anxiety symptoms of people migrated to Germany from Turkey, Italy, and Spain as well as ethnic Germans repatriated from the states of the former Soviet Union (n=435). Depression and anxiety symptoms were measured with the Patient Health Questionnaire scales offered both in German and native language. Questionnaires were distributed by non-health-specific counselling agencies from welfare associations and migrants’ self-organisations.

Results: High rates of anxiety (23.0%) as well as depression (15.8%) were found. The Turkish migrants reported the highest level of symptoms, while the Spanish migrants the lowest. Logistic regression analyses showed that retired migrants with lower school qualifications and who report lower subjective wellbeing in Germany have a higher probability of suffering from anxiety or depression. Severity of depressive symptoms varied across cultures, showing the highest likelihood of symptoms for the Turkish migrants.

Conclusion: Our results suggest that migrants in Germany have a high risk of suffering from anxiety and depression. Cultural background is an independent predictor for depression but not for anxiety.

Increasing globalization and the emergence of multicultural societies gives rise to the necessity to include cultural aspects in health care to a stronger degree. Considering that older migrants are among the most strongly growing population groups in Germany and prevalence of mental health disorders is continuously high [1], the socio-political significance of adequate health care in this population group is evident.

With regard to mental health, culture and migration related differences can be discerned above all with respect to how symptoms are experienced and dealt with [2-4]. Migrants are disadvantaged in terms of mental health care compared to natives in many respects [5-7]. Although the consideration of migration-related aspects is of great importance for an optimal care of migrants, there continues to be a lack of health care relevant investigations that take into account both the migration and the cultural background [5,8]. This leads to deficits in terms of misdiagnoses and inadequate treatments [9,10]. Empirical results on the prevalence of mental disorders in migrants are highly inconsistent. Some studies reported increased prevalence rates of mental disorders [11,12], while other studies did not find significant differences [13,14]. In summary, it can be assumed that acculturation difficulties increase the risk of mental disorders, and ethno-cultural values and attitudes as well as migration-related factors impede the utilization of health services [14-17].  Therefore, a transcultural perspective is essential for the understanding of the health situation of migrants. The aim of the study was a comparative cultural analysis of depression and anxiety syndromes as well as to examine the influence of socio-demographic, cultural, and migration-related factors on depression and anxiety in migrants in Germany.

Within a cross-sectional survey, we asked migrants from Turkey, Italy, Spain and ethnic German repatriates from the states of the former Soviet Union about their mental health symptoms, social and occupational situation, as well as migration background. The survey was part of the study “Primary prevention of alcohol-related disorders in older migrants – development and evaluation of a transcultural prevention concept” (BMBF grant # 01 EL 071). The study aimed to gain information about mental health and the utilisation of the health care system in elderly migrants (over 45 years). Questionnaires and a prepaid reply envelope were distributed by non-health-specific counselling services from German Caritas Association (DCV) and Workers’ Welfare Federal Association (AWO) as well as self-help organisations and socio-cultural groups of migrants. In total, 4074 questionnaires were distributed (Figure 1). The overall response rate of 13.7% (n= 559) is consistent with the commonly high drop-out rates in studies with migrants [18,19]. For analysis, we identified people with a migration background (i.e., parents are not born in Germany or the person has not lived in Germany since birth and at least one parent was born abroad). Subsequently, participants were assigned to one of the study-relevant migrant groups (criteria: “country of birth of person”, “countries of birth of mother and father” or “mother tongue of person”). The analysed sample consisted of 435 migrants (n=196 repatriated Germans, n=95 Italian, n=77 Turkish and =67 Spanish) (Figure 1). 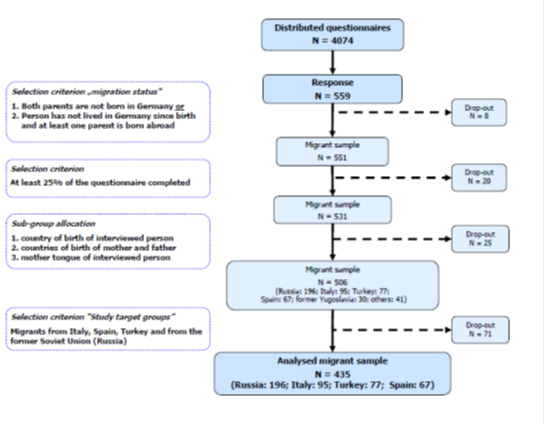 Depression was measured with the “Patient Health Questionnaire” (PHQ-D) [20] and anxiety with the “Generalised Anxiety Disorder Scale” (GAD-7) [21]. Additionally, cultural aspects (mother tongue, countries of birth of subject, as well as his mother and father), migration-related factors (German language proficiency, wellbeing in Germany, length of stay in Germany) and socio-demographic characteristics (age, gender, school qualification) were assessed with the set of indicators for migrant status [22] and the “socio-demographic data inventory” [23]. The questionnaire was translated into Russian, Italian, Spanish and Turkish by two bilingual translators for each language, with these versions then being amalgamated by a third bilingual expert. Translation differences were resolved by the three translators and the translated versions than adapted in focus groups with migrants with a Russian, Italian, Spanish and Turkish background concerning comprehensibility and functional equivalence.

Regarding mental health symptoms, we found overall high rates of anxiety (23.0%) as well as of depression (15.8%). As seen in Figure 2, we also found significant subgroup differences. The Italian group shows with 29.2% he highest rates for anxiety followed by the Turkish (26.5%) and repatriated German group (22.2%). The lowest rates were shown by the Spanish group (12.7%). The difference between Spanish respondents on the one hand and Italian or Turkish respondents on the other hand was statistically significant with regard to the presence of a anxiety disorder (Figure 2). 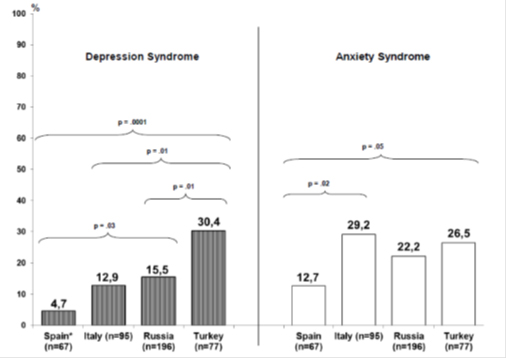 Predictors of anxiety and depression

Regarding anxiety, about 32% of the variation was explained by the considered variables (Table 2). Being a pensioner increases the odds of having an anxiety disorder by a factor of 3.7 compared with being employed. Conversely, people who have graduated from high school (odds ratio: .15) or are younger (odds ratio: .95) have reduced odds of having an anxiety disorder. Moreover, higher subjective wellbeing in Germany reduces the probability of anxiety (odds ratio: .21). No significant predictive value was found for cultural background.

Although migrants have been part of German society for many years, they are still disadvantaged in health care, particularly with regard to mental health care [5,25]. The lack of studies that take into account both the migration and the cultural background leads to deficits in the health care of this group. Thus, to ensure an adequate health care of migrants, differentiated information on the association between migration background and mental disorders is needed. The aim of this study was to analyse the occurrence of depressive and anxiety syndromes in migrants depending on socio-demographic, cultural, and migration-related factors.

Corresponding to the different migration processes of the analysed groups described in literature [26], we found significant subgroup differences in socio-demographic and migration-related factors. Spanish persons had the highest average age and the highest education level, whereas Italian respondents were the youngest and had the lowest education level. On average, the repatriated German respondents had lived in Germany for six years, while all other subgroups had lived in Germany for nearly 30 years. The Spanish respondents had the highest and the repatriated German participants the lowest subjective German language proficiency. Altogether, most respondents reported an at least fair wellbeing in Germany. A comparison of the examined sample with a reference sample showed that a higher education level and higher rates of unemployed persons as well as retired persons are present in the study sample. These differences in the socio-demographic and migration-related factors can be traced back to the varying migration histories of the examined migrant groups.

In comparison to what was expected from the German Health Survey [1,27] (four-week prevalence of affective disorders: 11.7% and 7.8% for anxiety disorders), we found in our study indications of higher levels of depressive and anxiety syndromes. Furthermore, subgroup comparisons demonstrated that the Turkish migrants showed the highest degrees of symptoms for both mental health complaints, whereas the Spanish migrants had the lowest degree of anxiety and depressive symptoms. These results are partly in line with the results from other migration-sensitive analyses of mental health, which reported increased prevalence rates of depressive disorders among migrants [28-31], but stands in contrast to other studies which did not find such high rates of anxiety and depressive disorders in migrants [4,10,13].

We analysed the association of depressive and anxiety syndromes with socio-demographic and migration-related factors as well as the cultural background. For both mental health disorders, we found a considerable degree of explained variation. Major factors that led to an increased probability for anxiety or depression were the fact of being retired, a lower level of school qualification and lower level of wellbeing in Germany. The cultural background was only a relevant factor explaining depressive symptoms, with the Turkish migrants showing a higher likelihood of having a depressive disorder. In contrast to other authors [2,32], we found no significant predictive value of acculturation indicators such as length of stay in Germany and German language proficiency. These results are partly in line with the results of studies in the Netherlands and Belgium, which report increased prevalence rates of depressive disorders among Turkish migrants [28,33]. This could be a reflection of cultural variation in idioms of distress and attitudes regarding mental complaints [34,35]. On the other hand, differences in help-seeking behaviour between migrant groups might also have influenced these results [14,29,36]. From the transcultural literature, it can be assumed that feelings of loss, culture-related values, expectations and attitudes, as well as the failure of achieving life goals may also codetermine the development of mental health disorders [2,5,8,37].

Limitations arise particularly from the small response rate not unusual in studies with migrants. Migrants frequently associate scientific surveys with government control and on the other hand, often have little reading and writing proficiency and therefore difficulties in completing questionnaires [18,38,39]. Since the response rate was low, it cannot be ruled out that our participants were highly interested and/or highly engaged migrants. Second, a selective distortion of the sample might have taken place both through the participating mediators (i.e. counselling agencies of welfare associations) and the migrants. Hence, results should be interpreted with caution, since the sample reflects only the situation of migrants with an affinity towards social and welfare environments. Still, the fact that the sample is fairly comparable to the corresponding general population migrant groups in Germany regarding several socio-demographic factors increases representativeness of the findings and reduces the probability of highly biased results. A third limitation results from the exclusively subjective assessment of mental health. However, several studies have shown appropriate validity of the used instruments [21,24]. Finally, we cannot dismiss the possibility that the results might be partly influenced by the difficulty of a transculturally reliable and valid assessment of mental disorders [15,40-43].

In summary, our results can be interpreted as a clear indication that the cultural background is an important independent factor regarding the emergence of mental health syndromes in migrants. Further specific research is needed regarding the impact of cultural and migration experiences on the occurrence of mental health disorders as well as on help-seeking behaviour of persons with non-native cultural backgrounds. This could lead to more knowledge about risk factors as well as about cultural and migration-related resources and characteristics that are beneficial for mental health.

There are no conflicts of interest.

©2016 Bermejo I. This is an open-access article distributed under the terms of the Creative Commons Attribution License, which permits unrestricted use, distribution, and reproduction in any medium, provided the original author and source are credited.