Cooks syndrome is a hereditary disorder which is characterized by bilateral nail hypoplasia on the thumb, index  and middle fingers, absence of fingernails (anonychia) on the ring finger and little finger, lengthening of the thumbs, and bulbousness of the fingers. Congenital anonychia affecting both the little fingers, occurring as an isolated developmental defect is a very uncommon phenomenon. A patient with such an abnormality is reported for its rarity and could be considered a “forme fruste” of Cooks syndrome.

Cooks syndrome is a hereditary disorder which is characterized in the hands by bilateral nail hypoplasia on the thumb, index  and middle fingers, absence of fingernails (anonychia) on the ring finger and little finger, lengthening of the thumbs, and bulbousness of the fingers. In the feet, it is characterized by absence of toenails and absence/hypoplasia of the distal phalanges [1].

A patient with non-syndromic, congenital anonychia affecting both the little fingers, occurring as an isolated developmental defect is reported for its rarity.

A 12 year old girl, born of a non-consanguineous marriage and full term uneventful pregnancy, presented with generalized pruritus of 2 weeks duration. On examination, she was found to have numerous, erythematous, tiny papules suggestive of miliaria rubra. However, incidentally, absence of the nails of the little fingers on both sides was observed. The tips of both fifth digits were soft and compressible and lacked the keratinized nail plates (Figure 1). She was born with this anomaly. Finger nails of the other digits, toe nails, hair and mucus membranes were normal. Systemic examination did not reveal any abnormality. Her past and personal history was not contributory. No other family member was affected in a similar fashion. 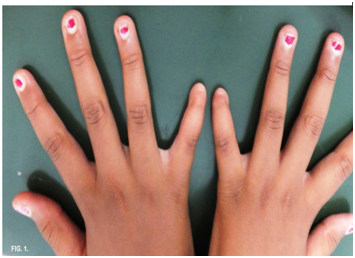 Figure 1. Absence of the nails of the little fingers on both sides.

Routine hematological and biochemical parameters were within normal limits. 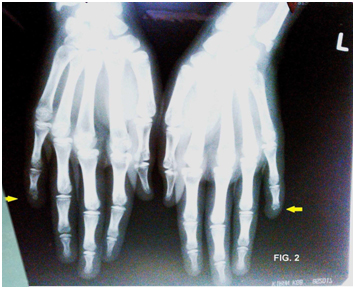 Figure 2. X-ray – both hands - Hypoplasia of the terminal phalanges of both little fingers. A tiny spicule of bone suggestive of the left terminal phalanx. Metacarpals and phalanges in the other fingers -Normal.

With the above findings, a diagnosis of congenital anonychia affecting the little fingers on both sides, and miliaria rubra was entertained.

She was prescribed calamine lotion for external application and systemic antihistamines to allay her pruritus. Since her congenital anomaly was only an isolated, asymptomatic condition, no intervention was considered.

Cooks syndrome was first described by Cooks et al. in 1985, after being discovered in two generations of one family. It was proposed that the inheritance of the disorder is autosomal dominant [2]. Congenital anonychia   (OMIM-206800) is defined as the absence of finger and toe nails [3]. The nail plate is a fully keratinized structure produced by the germinative epithelium of the nail matrix. Nail plate production occurs continuously, proceeding from the 15th week of embryonic life until death [4]. Drugs ingested by the expectant mother during early pregnancy can significantly affect the development of the nails. Phenytoin and warfarin may cause hypoplasia of nails, while alcohol may lead to possible anonychia [5]. Other teratogenic drugs known to cause anonychia are carbamazepine, morphine, trimethadone [6]. However, in the present case, her mother had an uneventful pregnancy. There was no history of ingestion of either any of the above mentioned drugs or alcohol, during that period.

The intimate anatomic relationship between nails and phalanges , which in turn determines the shape and curvature of the nails is responsible for the common occurrence of bone alterations in nail diseases and vice versa [7]. This could explain the hypoplasia of the terminal phalanges in both the little fingers, along with the absence of the nail plates in the present patient.

The involvement of only the little fingers in a bilateral and symmetrical fashion probably suggests a genetic basis for this condition. Due to lack of facilities, chromosomal studies could not be undertaken.

Autosomal recessive non-syndromic congenital nail disorder-4 (NDNC4) can be caused by homozygous or compound heterozygous mutation in the R-spondin-4 gene (RSPO4) on chromosome 20p13. (online Mendelian inheritance) RSPO4 is a member of the R-spondin family of secreted proteins that play a major role in activating the Wnt/beta-catenin signaling pathway. Wnt signaling is evolutionarily conserved and plays a pivotal role in embryonic development, growth regulation of multiple tissues, and cancer development. Mesenchymal-epithelial interactions are crucial in nail development and put anonychia on the growing list of congenital malformation syndromes caused by Wnt signaling pathway defects. It was reported to be the first gene shown to be responsible for an isolated, non-syndromic nail disorder [8].

Cooks syndrome is characterized by nail abnormalities ranging from dystrophic nails to complete absence of nails, associated with brachydactyly of the fifth finger and digitization of the thumb (triphalangism) [2]. The distal phalanges of the hands and feet may be either absent or hypoplastic. In the present patient, there was no digitization of the thumb, though there was hypoplasia of the distal phalanx of both little fingers. In addition, there was no involvement of the toe nails. Hence this could be considered to be an incomplete presentation or “forme fruste” of Cooks syndrome.

Nevin et al. described a family of four members in three successive generations with clinical features similar to Cook’s syndrome and suggested an autosomal dominant inheritance [1]. This opinion is at variance with an earlier case report by Littman and Levin, 1964, who suggested an autosomal recessive inheritance [9]. In the light of a negative family history, autosomal dominant inheritance could be ruled out, in the present patient. It could be presumed to be of recessive inheritance or a chance mutation or an isolated developmental defect, similar to an earlier case report by the present authors [10].

Anonychia in association with neurological defects such as choreoathetosis and epilepsy, in a family showing vertical transmission was described [11]. However, our patient did not have any neurological involvement.

Since there was no interference in her day to day activities and the anonychia was not causing any inconvenience, our patient was reassured .The present case is reported for the very rare occurrence of non-syndromic, isolated anonychia affecting only two digits, bilaterally and could be considered an incomplete manifestation or variant of Cooks syndrome, a “forme fruste” of the same.

©2016 Padmavathy L. This is an open-access article distributed under the terms of the Creative Commons Attribution License, which permits unrestricted use, distribution, and reproduction in any medium, provided the original author and source are credited.

Figure 1. Absence of the nails of the little fingers on both sides.

Figure 2. X-ray – both hands - Hypoplasia of the terminal phalanges of both little fingers. A tiny spicule of bone suggestive of the left terminal phalanx. Metacarpals and phalanges in the other fingers -Normal.