Metastatic melanoma with unknown primary [MUP] is a rare presentation. MUP with palpable lymphadenopathy without an identifiable primary or distant metastasis are a subgroup of this rare entity. MUP with nodal involvement most commonly involves axillary lymph nodes followed by inguinal and cervical lymph nodes. Immunohistochemistry (IHC) plays an important role in establishing the diagnosis in these cases. Studies have shown that lymphadenectomy improves survival in these cases. Role of adjuvant radiotherapy as well as chemotherapy remains controversial in view of lack of level 1 evidence.We are presenting a case of MUP involving bilateral submandibular nodes in which one lymph node on each side was completely replaced by melanoma but all other cervical nodes were disease free.

Metastatic melanoma with unknown primary [MUP] is a rare disorder accounting for 2-3% of all cases of melanoma [1]. It comprises of 2 different subtypes with varying presentation and prognosis [2]. First subtype includes those cases which present with palpable lymphadenopathy without an identifiable primary or distant metastasis. Second subtype includes those cases which present with metastatic disease at distant sites without an identifiable primary or palpable lymphadenopathy. Former subgroup is considered as stage III disease whereas the latter subgroup is considered as stage IV disease in the recent AJCC staging [3]. MUP with nodal involvement most commonly involves axillary lymph nodes followed by inguinal and cervical lymph nodes [4]. We are presenting a case of MUP involving bilateral submandibular nodes (level 1b) in which one lymph node on each side was completely replaced by melanoma but all other cervical nodes were disease free

A 60 year old gentleman, a chronic smoker presented with history of bilateral neck swelling of 3 month duration. Right neck swelling appeared before left although patient was not able to recollect exact time gap between the two events. He had not undergone any surgery in the past. Clinical examination revealed 6 ×4 cm, hard node in right level 1b and 4 × 2 cm, hard node in left level 1b. Detailed clinical examination didn’t reveal any primary tumor in oral cavity or in skin of the scalp or lip. FNAC of both the nodal masses was inconclusive on 2 occasions. Contrast enhanced computed tomography (CECT) neck and thora×revealed bilateral level 1b nodes alone, but no evidence of primary tumor or distant metastases (Figure 1a). Incisional biopsy of the right node revealed presence of clear cells which on IHC was positive for HMB 45 and S100 which confirmed the diagnosis as malignant melanoma (Figure 1b). This stresses the importance of immunohistochemistry (IHC) in establishing diagnosis in these rare cases. In view of the unexpected diagnosis, patient was re examined for any cutaneous or mucosal lesions but in vain. Esophago gastro duodenoscopy and bronchoscopy also didn’t reveal any mucosal lesions. Bilateral modified radical neck dissection preserving spinal accessory nerve, sternocleidomastoid muscle and internal jugular vein was performed. Intra and post operative course was uneventful except for left hypoglossal nerve paresis. Histopathological examination confirmed presence of malignant melanoma in both the nodes which were clinically palpable. Interestingly both nodes were completely replaced by metastatic melanoma and all other nodes were free of tumor (Figure 1c). Patient was given the option of adjuvant radiotherapy as well as chemotherapy, but was not willing for the same and hence was kept under close observation. At last follow up, he was disease free with complete recovery of left hypoglossal nerve paresis. 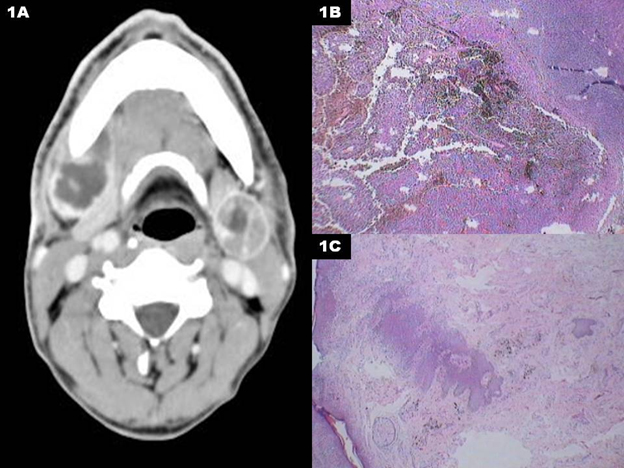 MUP is an interesting phenomenon. Although exact etiology of MUP is unknown, several theories have been proposed. A concurrent, unrecognized melanoma, a previously resected melanoma that was either misdiagnosed or ignored, a spontaneously regressed primary melanoma or de novo malignant transformation of an ectopic nevus cells within a lymph node are some of the explanations [5, 6]. Although melanoma arising denovo from the nevus cells in the lymph nodes have been described, immune based regression of the primary tumor is the most favored explanation among the oncologists [7, 8]. Although complete regression is very rare, partial regression has been reported in 9-46% patients [9, 10]. In the present patient it is very difficult to determine the possible etiology. The fact that entire node was replaced by the melanoma and all other nodes were free does suggest denovo origin of the tumor from the nevus cells in the lymph nodes. However simultaneous malignant transformation in two different groups of lymph nodes is very unusual. Primary drainage area for level 1b nodes includes lower lip, buccal mucosa, lower alveolus, floor of mouth and tongue. Involvement of bilateral nodes is seen in midline tumors and hence possible primary sites are tip of tongue, lower lip and floor of mouth. However non involvement of submental nodes (level 1a) questions the theory of possible midline primary melanoma which regressed spontaneously.

Lee et al reported the largest series of nodal metastasis with MUP [4]. They found that median age in this group of patients was > 60 years and it was more common in males. Axillary nodes were the most commonly involved nodes followed by inguinal and cervical nodes. Studies have shown that lymphadenectomy is quite effective in the management of these cases. The National Cancer Data Base study showed that in patients with MUP, 5 year OS for patients after lymphadenectomy was 55% whereas without lymphadenectomy was 27% [14].

Studies have described 5 year overall survival (OS) between 39 – 58% after lymphadenectomy for these patients [4, 11]. In contrast, 5 year OS after lymphadenectomy for nodal metastasis from known primary melanoma is between 36-40% (MKP) [4, 15]. Majority of the studies except the one from National Cancer Data Base study showed superior survival for patients with MUP compared to MKP [14, 16, 17]. Male gender, older age and multiple nodal involvement are associated with worse outcomes [4].

High dose Interferon for 1 year has been found to improve overall survival in cases of MKP where regional nodes are involved or pathological T stage is T4 [20, 21]. A recent trial found biochemotherapy consisting of Dacarbazine, Cisplatin, Vinblastine, Interleukin-2, IFN alfa-2b and granulocyte colony-stimulating factor to be equally efficacious [22]. The latter trial had also included patients with MUP. However none of these studies have specifically looked at the survival advantage with addition of immunotherapy or chemotherapy in patients presenting with MUP. Considering the high toxicity and no clear level 1 evidence, role of adjuvant biochemotherapy needs to be discussed with the patient.

The purpose of presenting this case is for following reasons

©2016 Vishwas. D. Pai. This is an open-access article distributed under the terms of the Creative Commons Attribution License, which permits unrestricted use, distribution, and reproduction in any medium, provided the original author and source are credited.