Fibromyalgia syndrome (FMS) is a musculoskeletal pain and fatigue disorder with diffuse myalgia and lowered pain thresholds. Platelets they take up and store serotonin (5-HT) and when activated they release 5-HT. 5-HT re-uptake inhibitors prevent 5-HT uptake by the synapses, but these drugs are clinically less effective in FMS. The current study examined 5-HT content in density separated platelets.

The study involves 20 female’s patients (age 39 ± 8 (SD) years) with FMS. 16 females (65 ± 8 years (SD) years) without FMS served as controls. The platelet population was separated according to density with a linear Percoll™ into 17 different density fractions. In all fractions, platelet counts was analyzed and determination of 5-HT content.

The study shows that platelets of FMS contain more serotonin. It is possible that platelets have additional storage locations of serotonin beside dense granules. The results may indicate that an abnormal sensitivity to pain may be due to an instability in the 5-HT system in FMS. Serotonin inhibitors, often given to FMS obstructs serotonin uptake in the synapses. It is therefore tenable that neurons eventually release a higher amount of serotonin. The circulating serotonin is taken up by platelets. As a result, there are to be a reduced effectiveness for these drugs in FMS, and patient will still encounter pain difficulties.

FMS is considered as a persistent pain disease. FMS is more than often connected with extensive pain, several tender points, and low energy [1]. The victims are mostly women and occurs approximately 2% of the general population [2]. Anxiety, depressive symptoms and major depression and are a feature of the disease [3]. The origin of and pathophysiology of FMS is still uncertain. Pathophysiological theories contain modifications in detailed neurotransmitters such as serotonin (5-HT). A likely involvement of 5-HT in FMS could therefore be possible. Some evidence suggest the hypothesis that an insufficiency in serotonergic neuronal operation could be linked to the pathophysiology of FMS [4,5]. Low concentrations of 5-HT in cerebrospinal fluid and in serum have been discovered in FMS. It is hypothesized to have a meaning in the pain threshold [6].

It is well established that 5-HT is important in human physiology. Nearly, 90% of the body 5-HT substance is located in the upper gastrointestinal tract. The majority of circulating 5-HT is metabolized in the liver [7, 8]. 5-HT has a crucial role in synaptic activity additionally [9]. It influence cognitive functions for instance memory and learning [10]. Serotonergic neurons produce 5-HT in the central nervous system. Almost all brain areas express 5-HT receptors [10]. Platelets do not produce 5-HT [11] but they gather the molecule in a way similar to serotonergic neurons [12, 13]. The process needs energy [14, 15]. When activated 5-HT is released from platelet dense granules [11]. 5-HT2 receptors mediate the effect of 5-HT upon platelets [16]. 5-HT is a weak platelet agonist and does not activate platelets per se [17]. The activity of 5-HT is guarded by a particular 5-HT transporter (SETR), which arbitrates the intracellular reuptake of 5-HT. SETR are able to be blocked by discriminating 5-HT reuptake inhibitors (SSRIs). It is well known that platelets, central or peripheral serotonergic neurons and intestinal epithelial cells express SETR. Common molecular and physiological features are shared in these locations [18,19]. Opinion is divided whether SSRIs are effective or not at FMS. Nociception refers to the physiological process of transmitting a painful stimulus from the periphery through afferent neurons to the cerebral cortex. It has been hypothesized that serotonergic neurotransmission has an important purpose in nociception [20,21]; modifications in 5-HT metabolism and transmission could as a result be vital in the pathogenesis of FMS.

Platelets are able to differ in density by a span of 1.04–1.09 kg/l [22]. The most important deciding factor of density are platelet organelles i.e. platelets with high-density holds more α and dense granules compared to low-density cells [23]. A few researchers constitutes that platelet density increases as they get older [24,25], however an opposite view exists [26,27]. Some additional science describe that platelet density do not alter in the circulation [28-30]. The understanding of clinical understanding of platelet heterogeneity has been studied as well. Acute myocardial infarction is related with increasing platelet density [31]. Moreover, an opposite association exists among density and the inflammatory response in the latter disease [32]. Small high-density platelets are found in inflammatory bowel disease [33]. Essential thrombocythemia is typified by low peak platelet density [34].

21 female patients with FMS, aged 39 ± 8 years (mean ± SD) took part in the study. All included FMS subjects were in search of care at the Pain and Rehabilitation Centre of the University Hospital, Linköping, Sweden. Patients completing the norm of the American College of Rheumatology standard for FMS were incorporated in the research (Wolfe et al). Clinical investigations and patient’s case histories established the clinical diagnoses of FMS. A control group (CON) consisted of 16 females aged 65 ± 8 years (mean + SD) were also involved in the study. All these subjects were free from FMS and they were all coming for a regular nurse led reception at a local health center. Every participants gave informed permission. The study was permitted by the community ethics board of Linköping University, Sweden (reg. number: 2012/269-32).

All samples were taken in Vacutainer™ tubes (Becton and Dickinson, New Jersey, U.S.A.). Venous blood (7.5 ml) was anticoagulated with 2.5 ml 0.129 M disodium citrate. Platelets were separated according to density [35] by a linear Percoll™ gradient (GE Healthcare Bio-Sciences AB, Sweden). In order to fabricate Percoll™ gradient, two solutions (1.09 and 1.04 kg/L) were mixed as follows:

In order to separate platelets according to density, following procedure was applied; first 7.63g of the 1.09 kg/L Percoll™ mixture was layered in the bottom of a 50 mL test tube. Thereafter 12.48 g of the 1.04 kg/L and 13.08 g of the 1.09 kg/L and Percoll™ solutions were employed into a two-chamber gradient maker. By this setting linear gradients were produced covering the density span 1.09 kg/L to 1.04 kg/L. Subsequently, top of the gradient was covered by 10 mL citrate anticoagulated whole blood. At the end, the 50 mL test tube was centrifuged at 2767g for 1 ½ hours. In turn, to generate 17 different density fractions by the help of gravity, the underside of the test tube was pierced by a hot needle and the content was allowed to pour out (Milovanovic et al). Throughout this process, each fraction contained about 2 mL. Platelet counts were analyzed using a CELL-DYN 4000 (Abbott Diagnostics, Illinois, U.S.A.) in all fractions. From there, all density fractions were lysed with Triton X-100 (final concentration of 1%) (Sigma-Aldrich, Missouri, U.S.A.). By centrifugation at 2000g for 10 minutes cell fragments were removed. At last, for determination of 5-HT content an ELISA kit (R&D, UK) was put in use.

For the statistical assessment, Microsoft Excel®, ver. 12.0.6514.5000 was utilized. The unpaired Student’s t test were applied for calculating quantitative data. p-values ≤ 0.05 were used to show significance. 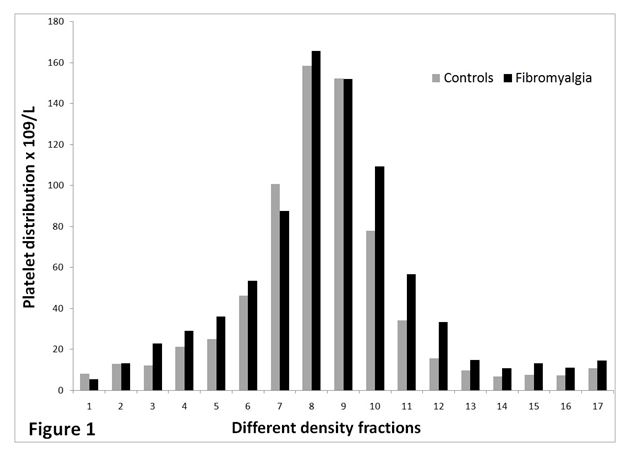 Figure 1. The distribution of platelets (x109/L) in the gradient for AD patients (n=20) and controls (n=16). Fraction no.1 holds platelets having highest density and fraction no. 17 contains platelets with lowest density. 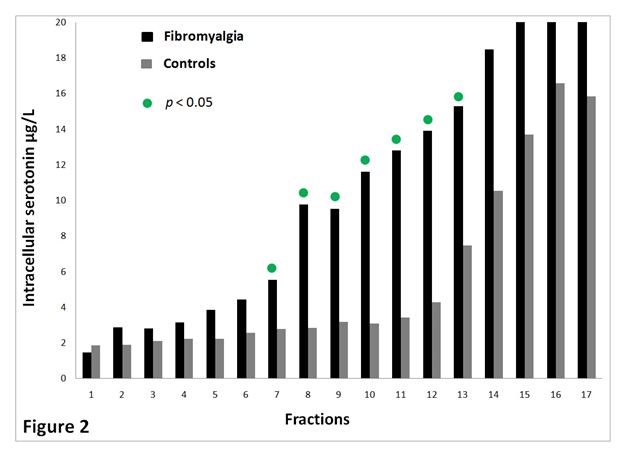 To the best of our knowledge, this is the first report studying FMS with respect to serotonin content in different platelet density subpopulations. It is evident from current study that platelets with normal and lower density from FMS contain augmented levels of serotonin in contrast to same density platelets population from CON group. Upon activation platelets release serotonin, it is therefore to theorize that augmented platelet serotonin content mirrors less in vivo platelet activation. Thus, our current results is indicate opposite, since our recent published data shows that platelets of FMS has a higher platelet activity [36]. One can thereby speculate how much serotonin originate from the platelets and how much is derived from the plasma. It is proposed that low serotonin levels in serum have an inverse correlation with clinical events of apparent pain [37]. Same study also offers an explanation as why platelets may contain high levels of 5-HT, in that platelet 3H-imipramine (5-HT reuptake receptor) binding was higher. It is therefore possible that platelets not only contain serotonin and release upon activation, they also have a reuptake of the molecule, presumable via the SETR. It is further to assume, that serotonin has additional storeroom sites next to dense granules. The results may indicate that an abnormal sensitivity to pain may be due to an instability in the 5-HT system in FMS. This could be a curious scientific finding.

The musculoskeletal pain in FMS is frequently medicated with a range of medicine. Many   of those are drugs preventing serotonin uptake in the synapses. The medication increases serotonin concentration in the synaptic cleft. It is therefore to postulate that the neurons eventually release a higher amount of serotonin in FMS. Uptake of serotonin occurs in different parts of the body i.e. by the platelets. FMS individuals thus experience pain in many parts of the body, one can speculate if a connection exists. An additional result is that there are to be a decreased efficiency for these drugs in FMS, and patient will still experience pain problems. Unfortunately, one can conclude that the FMS offers a difficult therapeutical challenge. FMS provide many cases which is not curative, just momentary or limited relief is offered. That alone is not unimportant, but it is also important to make an effort to understand the mechanisms of 5-HT and platelets and thereby better recognize FMS. By doing so, it could provide a help to FMS patients in the future. It may be significant to analyze platelet serotonin levels and also serum levels. However, the clinical impact of platelet serotonin in platelets needs further research.

Circulating 5-HT depends mostly on its production in the gastrointestinal tract [38]. A determinant of human 5-HT synthesis is the accessibility of the precursor tryptophan. It depends on the rate-limiting enzyme tryptophan hydroxylase and its cofactors, tetra-hydrobiopterin and folic acid as well [39]. Therefore, with a high degree of certainty, platelet serotonin content depends on food ingestion. For that reason, it is even possible that nutrition could affect the pain level of the FMS.

©2016 Milovanovic M. This is an open-access article distributed under the terms of the Creative Commons Attribution License, which permits unrestricted use, distribution, and reproduction in any medium, provided the original author and source are credited

Figure 1. The distribution of platelets (x109/L) in the gradient for AD patients (n=20) and controls (n=16). Fraction no.1 holds platelets having highest density and fraction no. 17 contains platelets with lowest density.