Many adjuvants to local anesthetic agents for brachial plexus block are investigated in an attempt to increase the onset and duration of block and to improve post-operative analgesia.The present study was designed to assess clinical utility of adding dexmedetomidine to local anesthetics during peripheral nerve blockade. 120 patients of age 18 -58 yr, of either sex, of ASA grade I/II were randomized into two equal groups of 60 patients each, group R received 20 ml of 0.75% ropivacaine with placebo while patients in group RD  received 20 ml of 0.75 % ropivacaine with 50 µg of dexmedetomidine  for supraclavicular brachial plexus block using ultrasound guidance. Sensory and motor onset time, sensory and motor block duration, duration of analgesia, sedation scores, hemodynamic changes and any side effect were all recorded and statistically analyzed. Onset of sensory block (8.30 ± 2.62 min vs 11.50 ± 3.14 mins) and establishment of complete motor blockade (11.62 ± 3.39 min vs. 15.18 ± 4.25 mins) were significantly earlier in the ropivacaine with dexmedetomidine group. Postoperative analgesia was prolonged significantly in the ropivacaine with dexmedetomidine group (1209.90 ± 107.536 mins). In conclusion dexmedetomidine as adjuvant to 0.75% ropivacaine for supraclavicular brachial plexus block extends the duration of analgesia and shortened the onset time of sensory and motor block.

Brachial plexus block is the most reliable and commonly preferred techniques for regional anesthesia of the upper extremity. The use of ultrasound guidance for nerve block has attained massive recognition in last few years. The concept of nerve visualisation by ultrasound is convincing and supported by literature [1-3]. Many adjuvants to local anesthetic agents are investigated including opioid [4-8] and non-opioid agents [9-11], in an attempt to increase the onset and duration of block and to improve post-operative analgesia. Clonidine, an α-2 adrenergic agonist has been evaluated as an adjuvant to LA in brachial plexus block but dexmedetomidine, also an α-2 adrenergic agonist has some advantageous characteristics compared to clonidine like greater hemodynamic stability as it is more selective for α2 adrenergic (α2:α1 = 1620:1) [12] receptors and both baroreceptor reflexes and heart rate responses are well preserved with dexmedetomidine. However, there remains limited knowledge on the analgesic efficacy and clinical utility of adding dexmedetomidine to local anesthetics during peripheral nerve blockade in human population [13,14]. Therefore the present study was designed to evaluate the effect of adding dexmedetomidine to a 0.75% ropivacaine for ultrasound guided supraclavicular brachial plexus.

This prospective randomized double blind controlled study was conducted in Department of Anaesthesiology & Critical Care Medicine, Subharti Medical College, Meerut on 120 adult  consented patients  scheduled for elective unilateral upper limb (below shoulder) surgeries under ultrasound guided supraclavicular brachial plexus block. We compared the onset & duration of sensory and motor block, duration of analgesia, sedation level, hemodynamic changes and complications (if any). An approval from the Institutional committee of ethicsand written informed consent from patients were obtained. The present study was conducted on patients of both sexes, between 18-58 years of age, ASA grade I-II. The duration of operation was less than 90 minutes. Exclusion criteria included patients with chronic pain, those using chronic analgesic medications, coagulopathy, history of brachial plexus injury, allergy to the study drug, patients taking other medications with sympatholytic effects, hepatic or renal insufficiency, and infection at the site of injection, shoulder surgery and patient refusal. Complete pre anesthetic check-up was done and patients scheduled for elective surgery were admitted and a fasting of 6 hours was ensured. A total of 120 cards (for 60 in each group) were prepared byan anaesthesiologist who was blinded about the study and patients were grouped accordingly. Patients were randomized into two equal groups (group R and group RD) of 60 patients each and patients in group R received 19 ml of 0.75% ropivacaine with placebo (1 ml Normal saline) while patients in group RD received 19 ml of 0.75 % ropivacaine plus 50 µg of dexmedetomidine (0.5 ml plus 0.5 ml Normal saline) for supraclavicular brachial plexus block using ultrasound guidance.

Patients were not premedicated before the Supraclavicular brachial plexus block. On arrival in the operating room, a venous access was established on the contralateral armand standard monitoring for BloodPressure, heart rate, pulse oximetry and ECG were commenced. All the blocks were performed by the same anaesthesiologist using transportable ultrasound system (Sonositemicromax, SonositeInc., Bothell, WA, USA) with a 38 mm 8-13 MHz linear high frequency ultrasound transducer (HFL-38).

The study solution was prepared by an anaesthesiologist who was not aware about this study. The predetermined volume of the drug was administered around the brachial plexus after visualisation by ultrasound probe according to group R or group RD with a 22 gauge needle. Sensory block was confirmed by loss to cold sensation using an alcohol swab and pinprick sensation using a 25 G hypodermic needle in all dermatomes of the brachial plexus (C5 – T1). Supraclavicular block was considered successful when all dermatomes of brachial plexus (C5 – T1) were blocked within 30 mins. Onset of sensory block was defined as a decrease of sensation to 25% or less by pinprick in comparison to contralateral limb as a reference. It was evaluated at 1, 2, 4, 6, 8, 10, 12 and 15 min. and every five minutes thereafter until the effectivity or failure of the blockade was identified. Sensory block duration was defined as the time from injection of local anesthetic study solution to complete recovery from cold and pain sensation in all dermatomes of the brachial plexus.

Motor block onset was defined as the time from injection of local anesthetic study solution until achieving a reduction in motor power to grade 3/4. It was evaluated at 1, 2, 4, 6, 8, 10, 12 and 15 min. and every five minutes thereafter until the effectivity or failure of the blockade is identified. Motor block duration was defined as the time interval between the end of LA mixture administration and the recovery of complete motor function of the hand and forearm of the blocked limb. Motor blockade was evaluated by motor blockade scale15:-

Blood pressure (Systolic, Diastolic and mean arterial pressures), Heart rates ,Peripheral Oxygen saturation and sedation scores were monitored intraoperatively for every 10 mins after the block was given and every 30 mins for the first 2 hours postoperatively and then every 2 hrs till 6 hrs in to the postoperative period and thereafter every 6 hrs till 24 hrs postoperatively. The sensory block, the motor block and the pain scores were monitored every 2 hourly for the first 12 hrs then every 6 hourly till 24 hrs postoperatively. If patient notice that block have wornedoff between the last assessment and present assessment, the time in which the patient noted block waning during this period was noted

Duration of analgesia was defined as the time from injection of local anesthetic mixture to the use of rescue analgesic. Pain was assessed using the visual analog scale (0-10). The rescue analgesic (inj. Tramadol 100 mg i.v.) was administered when the patient started complaining of pain (VAS Score > 4).

Any complications pertaining to block technique or side effects of medications (if any) were also noted. After completion of study, the collected data was tabulated as mean± SD and compared by using software SPSS (15 Inc. version, Chicago). A p-value < 0.05 was considered significant.

The study was successfully conducted on 120 adult patients and all patients were included for data analysis. The demographic profile of the patients age, sex, weight, ASA grade were comparable in each group. (Table 1) 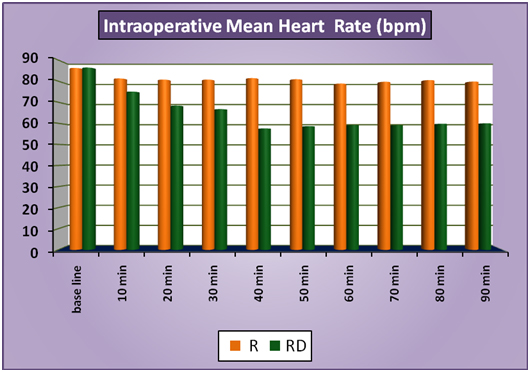 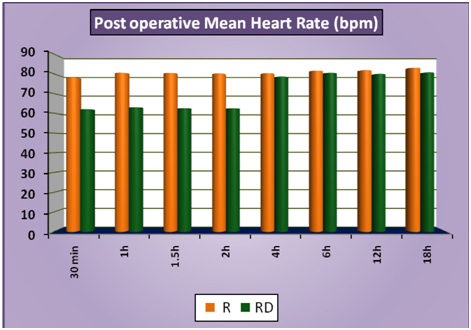 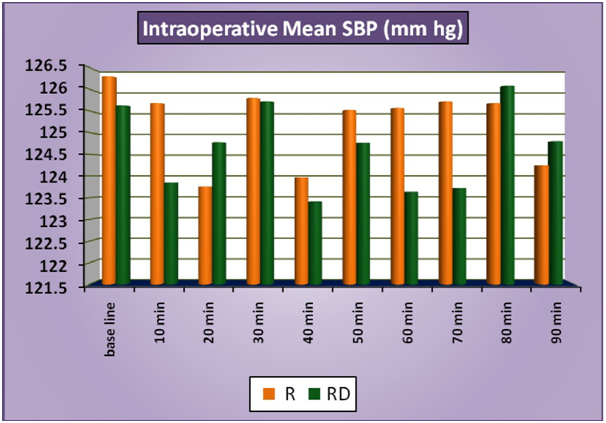 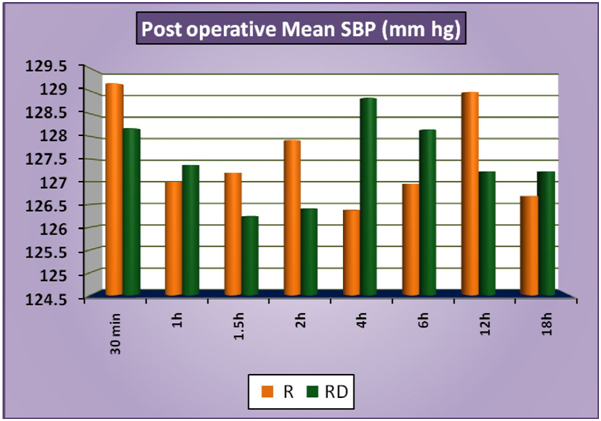 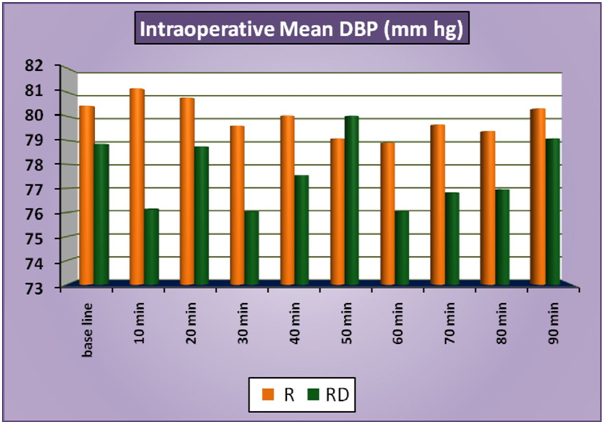 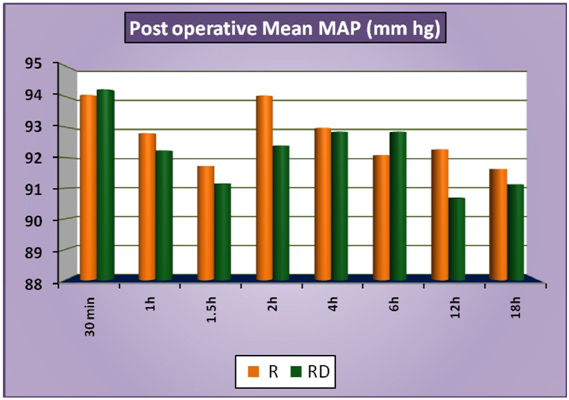 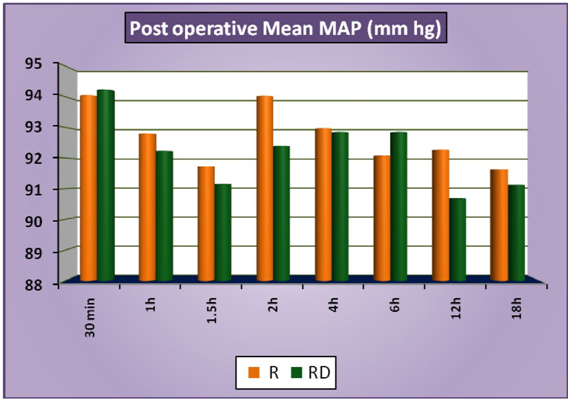 No incidence of hypotension, respiratory depression (respiratory rate < 10 breaths/ min. or SPO2 < 90% on air) or drowsiness (sedation) or any other study drug related side effects were noted in the two groups. However Bradycardia (HR<50/min) was noted in 2 cases in RD group and none in group R. Bradycardia was treated with injection atropine (0.2mg -0.6 mg I/V). There were no noted adverse effects associated with lower heart rates.

When this study was designed, there were only a few clinical studies of peripheral perineural dexmedetomidine in humans and till date only a limited literature is available for peripheral use of perineural dexmedetomidine in humans in conjunction with ropivacaine exist. Among the many pharmacologic agents added to local anesthetics including opioids [4-8] and non-opioids [9-11] (midazolam,dexamethasone, ketamine), epinephrine has traditionally been added to local anaesthetic solutions to enhance the duration of analgesia and reduce the systemic absorption. Clonidine (a partial α 2 adrenoreceptor agonist) has been found to enhance and prolong the effect of ropivacaine for brachial plexus blockade [17]. Dexmedetomidine has selectivity 8 times more than clonidine for α2 receptor (α2/α1 -1620:1) [18-20].

Several hypothesized mechanism of action has been suggested to explain the analgesic effect of α2 adrenoceptors agonists. Some of these include vasoconstriction around the injection site, direct suppression of impulse propagation through neurons as a result of a complex interaction of axonal ion channels or receptors, local release of encephalin- like substance, a decrease in localized inflammatory mediators and increase in anti-inflammatory cytokines through a α2adrenoceptors- mediated mechanism.

In present study a dosage of 50 µg dexmedetomidine was chosen , based on the doses that have been proven safe for IV sedation [21] and on basis of data from previous studies that used dexmedetomidine intrathecally [19,22] (up to 10 μg) or perineurally [13] (1 μg/kg). An animal study showed that high-dose dexmedetomidine (25–40 μg/kg) on perineural administration did not damage axons or myelin sheaths and could even reduce the bupivacaine-induced acute perineural inflammation, thus highlighting safety of perineural dexmedetomidine [23].

Esmaoglu et al. in their study added dexmedetomidine to levobupivacaine for an axillary brachial plexus block Dexmedetomidine added to levobupivacaine for axillary brachial plexus block shortens the onset time and prolongs the duration of the block and the duration of postoperative analgesia. Sometimes  dexmedetomidine can cause bradycardia .They also explained that peripherally, α2 receptor agonists produce analgesia by reducing release of norepinephrine and causing receptor-independent inhibitory effects on nerve fibre action potentials [14].  In another study D. Marhofer et al. added dexmedetomidine as an adjuvant to ropivacaine in patients undergoing ultrasound guided ulnar nerve block. They showed that addition of dexmedetomidine prolonged the duration of sensory and motor block and shortened the motor onset time although the time to sensory onset was not shortened [26].

Dexmedetomidine may also have side effects such as hypotension and bradycardia which usually occurs with increased dosage, along with other effects such as sedation and anxiolysis. Hemodynamic effects which occurs after perineural administration of dexmedetomidine possibly occurs due to some systemic uptake of the drug. The dexmedetomidine results in decreased systemic vascular resistance and indirectly decreased myocardial contractility, cardiac output, and systemic blood pressure. The decrease in heart rate caused by α-2 agonist can also be explained on the basis of their central action by which they decrease sympathetic outflow and nor-epinephrine release.

©2015Tiwari P. This is an open-access article distributed under the terms of the Creative Commons Attribution License, which permits unrestricted use, distribution, and reproduction in any medium, provided the original author and source are credited.